This isn't a proper post....just to let you know, I'm finally back in Caunes. It's only for a week, in the infamous 'window of well feeling' between chemo sessions.

I can't believe how good it feels.We had snow when we arrived, but within 48 hours the sun was out and the skies were beautifully blue. The house and garden look great, the TV, the phone, the internet are all working. The battery was flat on the car, but a quick over night charge sorted that.......so everything in the garden is rosy.

I will post properly about this quick visit to my favourite place in the world later on, when I get back to England...but I thought the following photos had to be shared straight away. 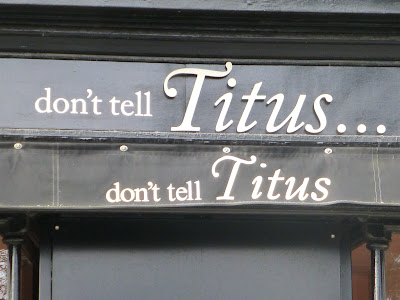 About 30 years ago, I discovered Saltaire, just outside Bradford. I honestly believed that no one else in the world knew about it.


It was clearly a small Victorian town, planned along, almost US type grid lines.... and seemed to have been built to house mill workers at what was then, 30 years ago, the completely derelict Salts Mill. 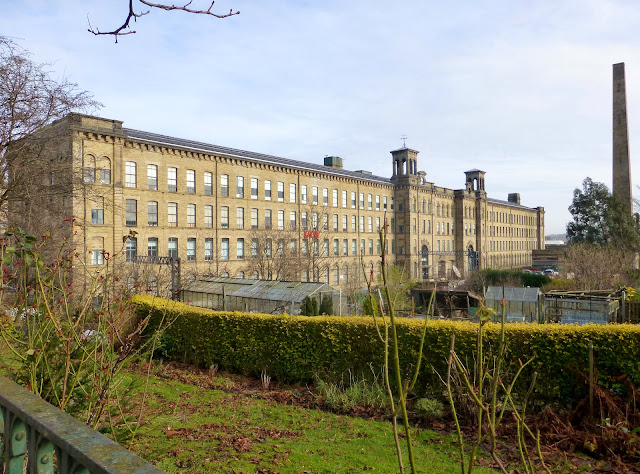 I was fascinated. I saw two cassocked priests playing badminton over a net strung between lampposts on the drive way up to the rather gorgeous church.....but apart from them, I saw hardly anyone.
Many of the houses were boarded up, the patches of green, between the derelict mill and factory buildings were overgrown, and the whole place had a feeling of the Marie Celeste.
However...the historian (well, history teacher) in me, recognised something special about the place.


The mill buildings were huge...the biggest I had ever seen. I later discovered that it had been the biggest factory in Europe when it was built. 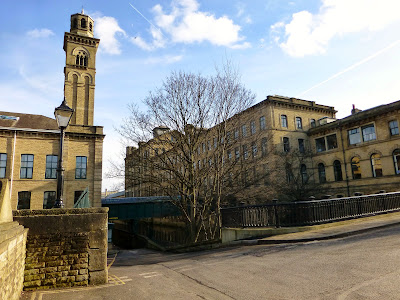 The houses were solid, good Victorian stone buildings. They had interesting  and decorative arched window and door features. Each street contained dozens of small 2 up 2 down artisan classic well built terraced houses, but at each end of the street were larger, more imposing buildings. 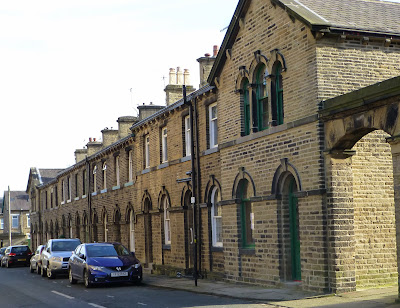 The names of the streets fascinated me too.Not just the usual Coronation St, Sebastopol Terrace and Victoria Road that could be found in any old Victorian street plan.....but Ada St., Caroline St., and Titus St. 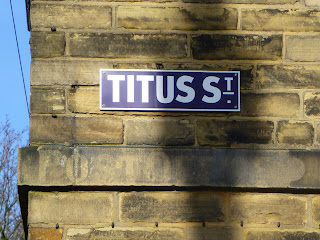 The mill buildings were in a valley.....water rushing past, a clear power source, the canal ran through the valley.....as did the railway......it all started to fit together. This had clearly been a huge industrial centre......and various images began to emerge from the grander buildings that I kept coming across.


Lamas featured heavily.....and a few other woolly looking beasts...alpaccas..they featured on coats of arms hidden within the grime of the buildings. 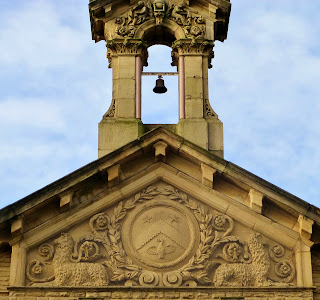 At the bottom of the valley, even lower down that the factory buildings, and the canteen, the hospital building , the church, and the public assembly rooms, there was a park.....very Victorian in lay out.....flower beds, walk ways, tree lined avenues, and beyond....the hills....and the vast Yorkshire sky. 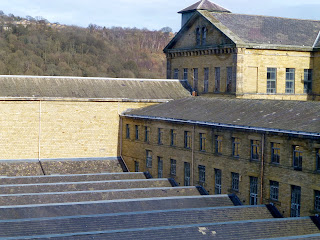 All of this could have been seen from the huge windows in the main factory building. My understanding of 19th century factory conditions, was that workers were not encouraged to look out of windows. In fact most would have had very little natural light to have worked by. They slaved away at their looms for 12 -14 hours a day,no looking out of windows allowed.
Everything I saw smacked of Victorian philanthropy......decent solid houses for workers, a factory with light, and views of the hills and the sky, somewhere for workers to worship, to meet and socialise, to walk at the weekend, out of the city.


It did all fit. As it happened I apparently had not discovered Saltaire. Possibly, a bit like Columbus did not discover America.
In the church I found a brief poorly produced leaflet explaining how Titus Salt had envisaged this model town for the workers in his factory.  He wanted his workers to be healthy, partly for his own benefit of course, but also because he was genuinely philanthropic.The church, where Titus is buried, was finished before anything else, and although workers were allowed a day off, and the park was built for them....they were not allowed to drink alcohol anywhere in Saltaire. There were no licensed premises...no beer halls for Titus’s workers.
The streets were named after his children, and the larger houses, dotted along each street were for the factory supervisors. So the workers were supervised at work and at play. 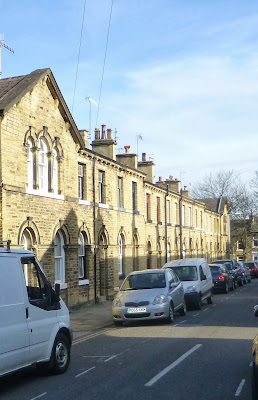 He imported exotic south American fibres and contributed massively to the Yorkshire textile industry....and his own wealth.
Now of course..... 30 years from my discovery......Saltaire is a tourist destination. The fabulous redeveloped Salts Mill is the centre for a fabulous Hockney gallery. Brilliant use has been made of the vast floor space that was the original mill building. Beautiful books, art, pottery, rugs and tapestries can be viewed and bought there. Operatic arias played on the ground floor gallery fill the space, accompanying the tourists looking at the Hockneys .Gorgeous meals can be eaten in the lovely restaurant on the top floor, diners able to look out across the mill roof, and to the hills beyond. 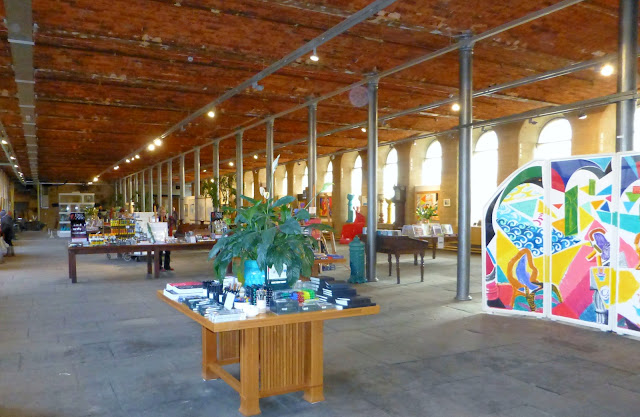 Now, it is also possible to drink alcohol within the town boundaries.....and a clever wine bar owner has called his bar “ Dont tell Titus”. 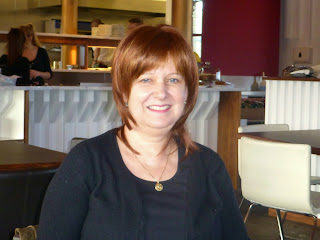 I love this place, partly because it represented real improvement in living and working conditions for Bradford’s textile workers, albeit for Titus Salt’s profit.....but mainly because I discovered it.
Posted by Janice at 18:19 33 comments:

A quick update....things are going well. I am still having a period of feeling reasonably well in between chemo sessions, able to “lunch” with friends, visit grandchildren, bake cakes and make marmalade, as well as managing gentle sessions at the gym....so, not too bad. We are actually hoping to get to France for a week before session 5.

It has been strange to spend Valentine's day...also 30th anniversary of mum's death, hooked up to the chemo machine.....but it was very relaxing, staff were brilliant...again......not really a bad way to spend a day. 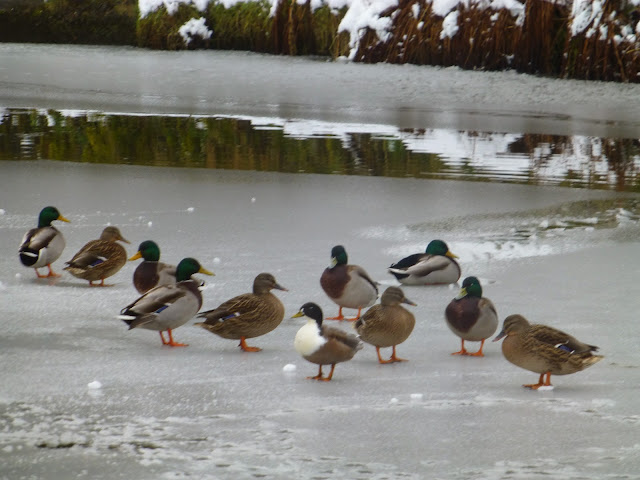