Many years ago daughter Jess loved a Posy Simmonds’ children’s book called “Lulu and The Flying Babies”. It involved a little girl being shown the delights of a museum and art gallery by some cherubs that had come to life within the museum. They flew around the museum with Lulu, from room to room showing her great paintings and fabulous statues. 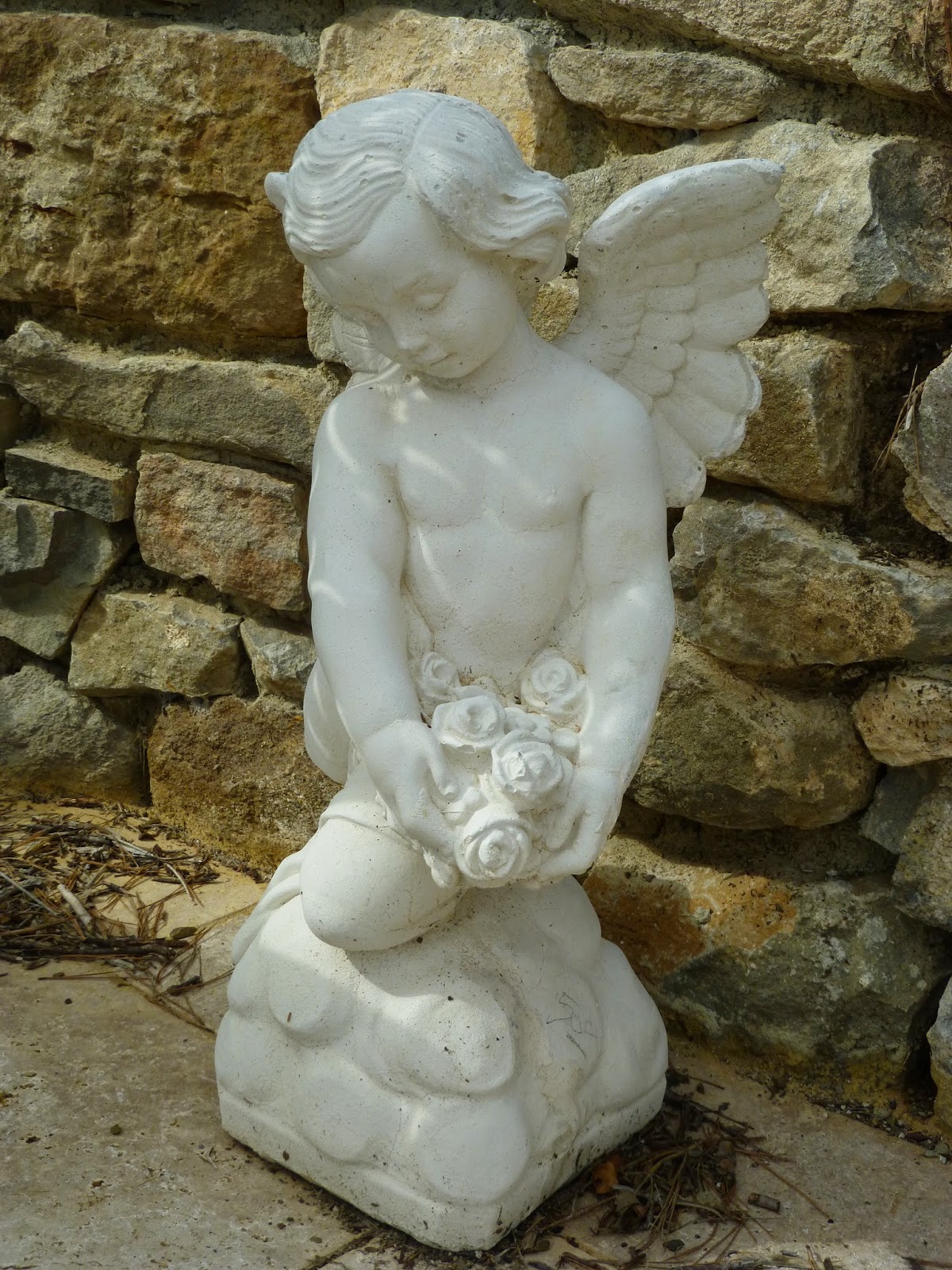 So, when I saw this beautiful flying baby in a stonemason’s yard….we decided s/he needed to have a home in our garden. 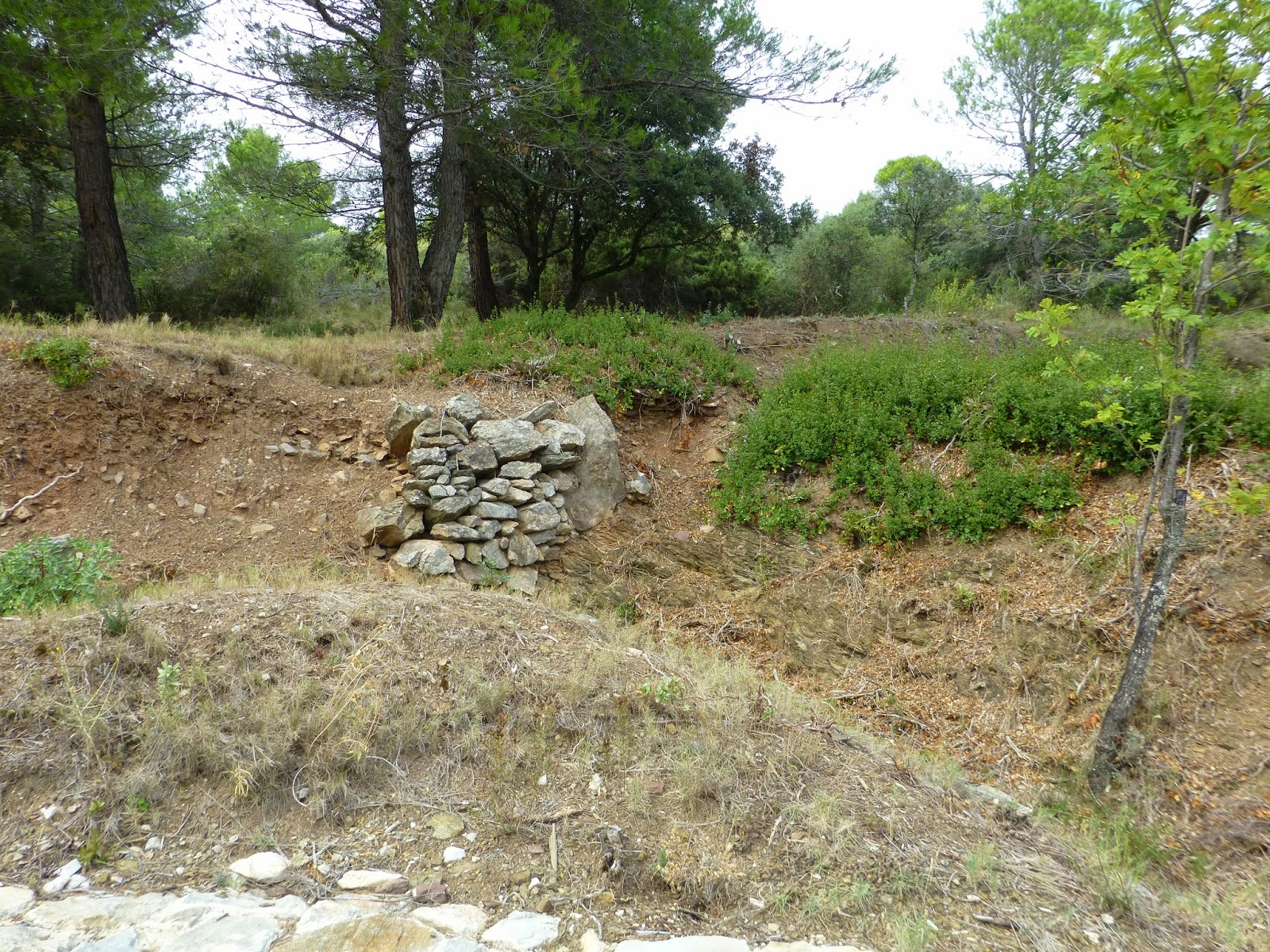 The position, above one of the terraces at the back of our house was chosen. 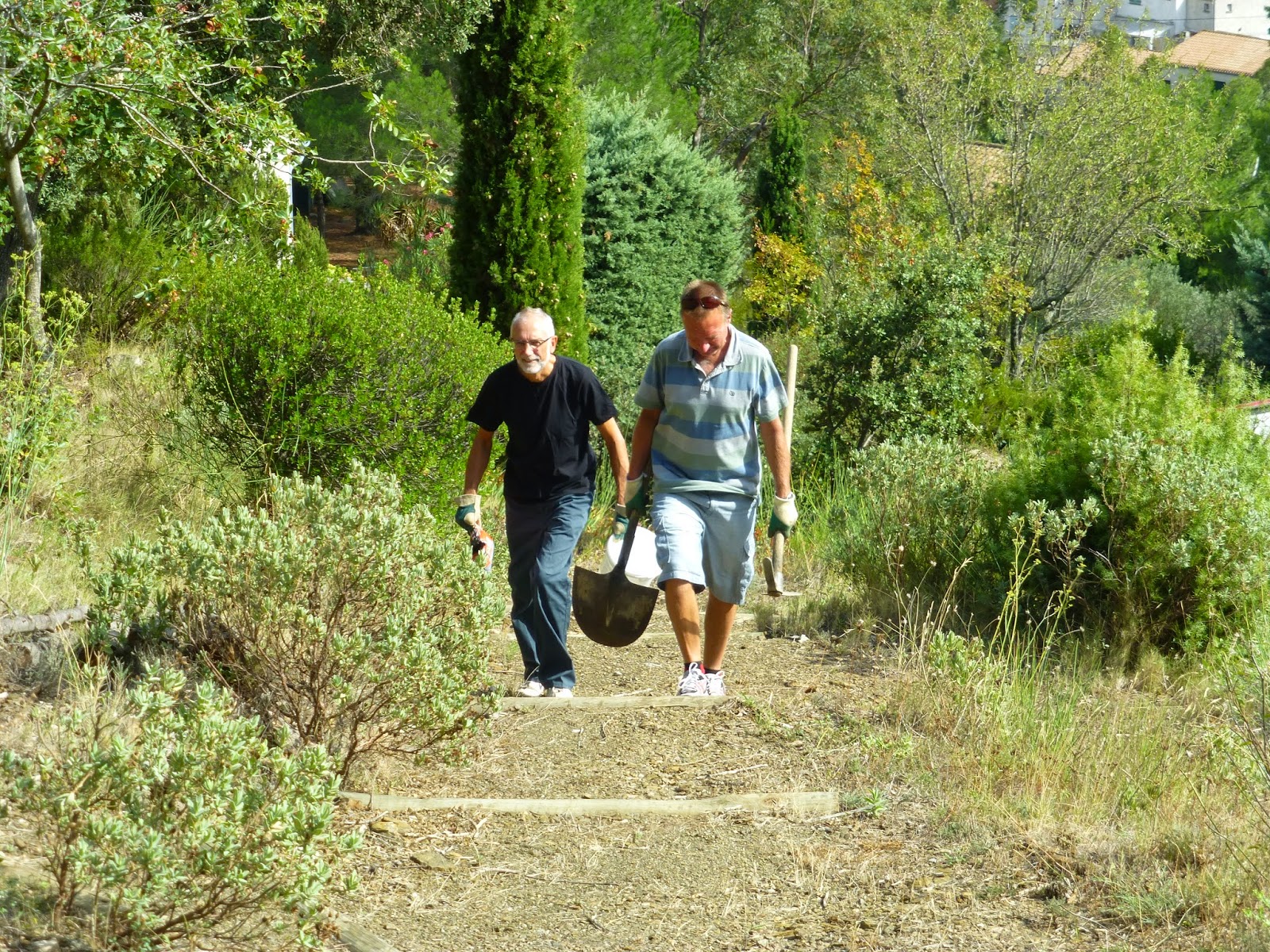 We waited until brother-in-law, Rick, was visiting, in order to have help in lifting and cementing our flying baby in place. 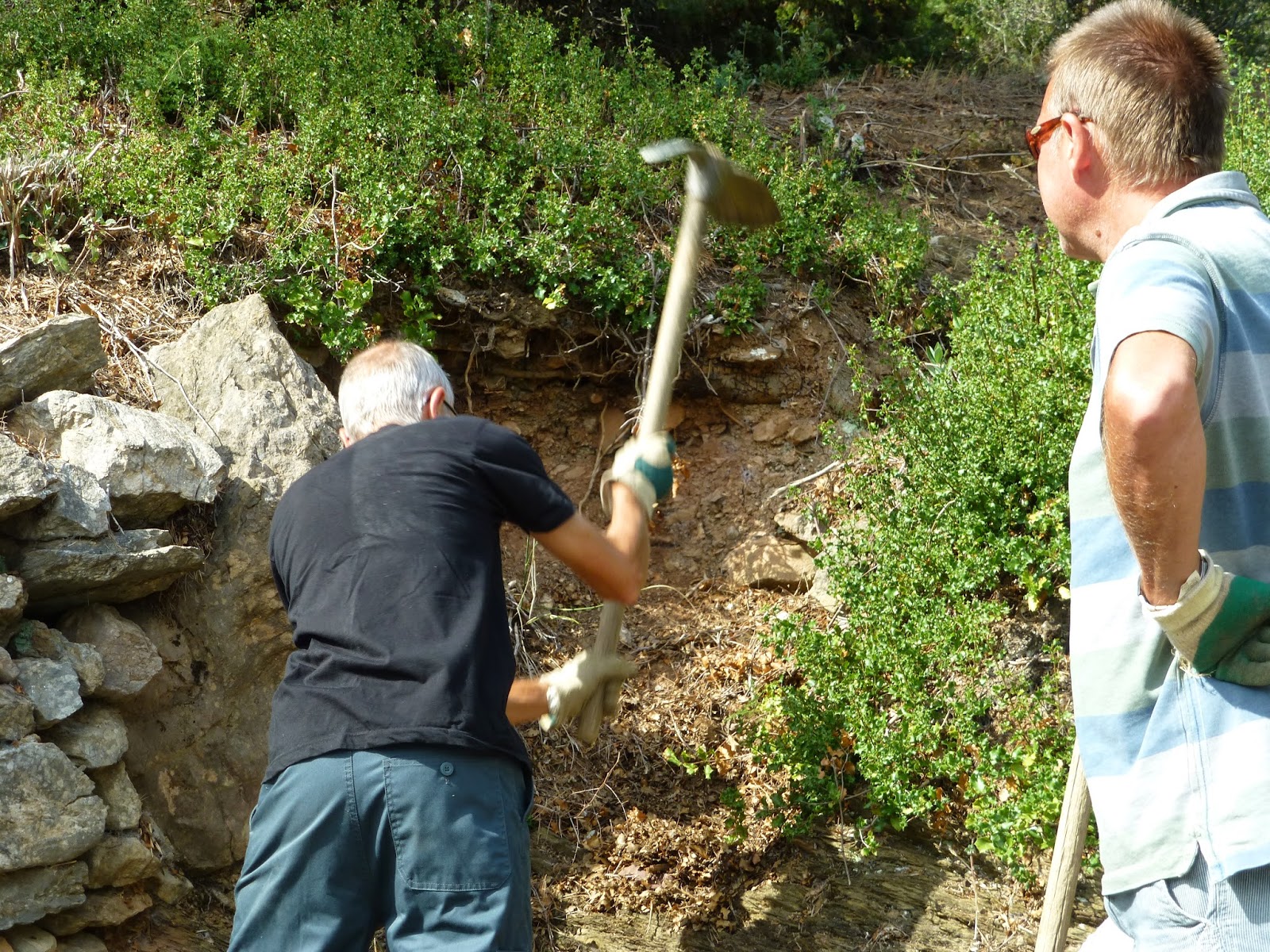 A bit of preparation of an appropriate ledge had to take place,

And then, s/he was put in place. 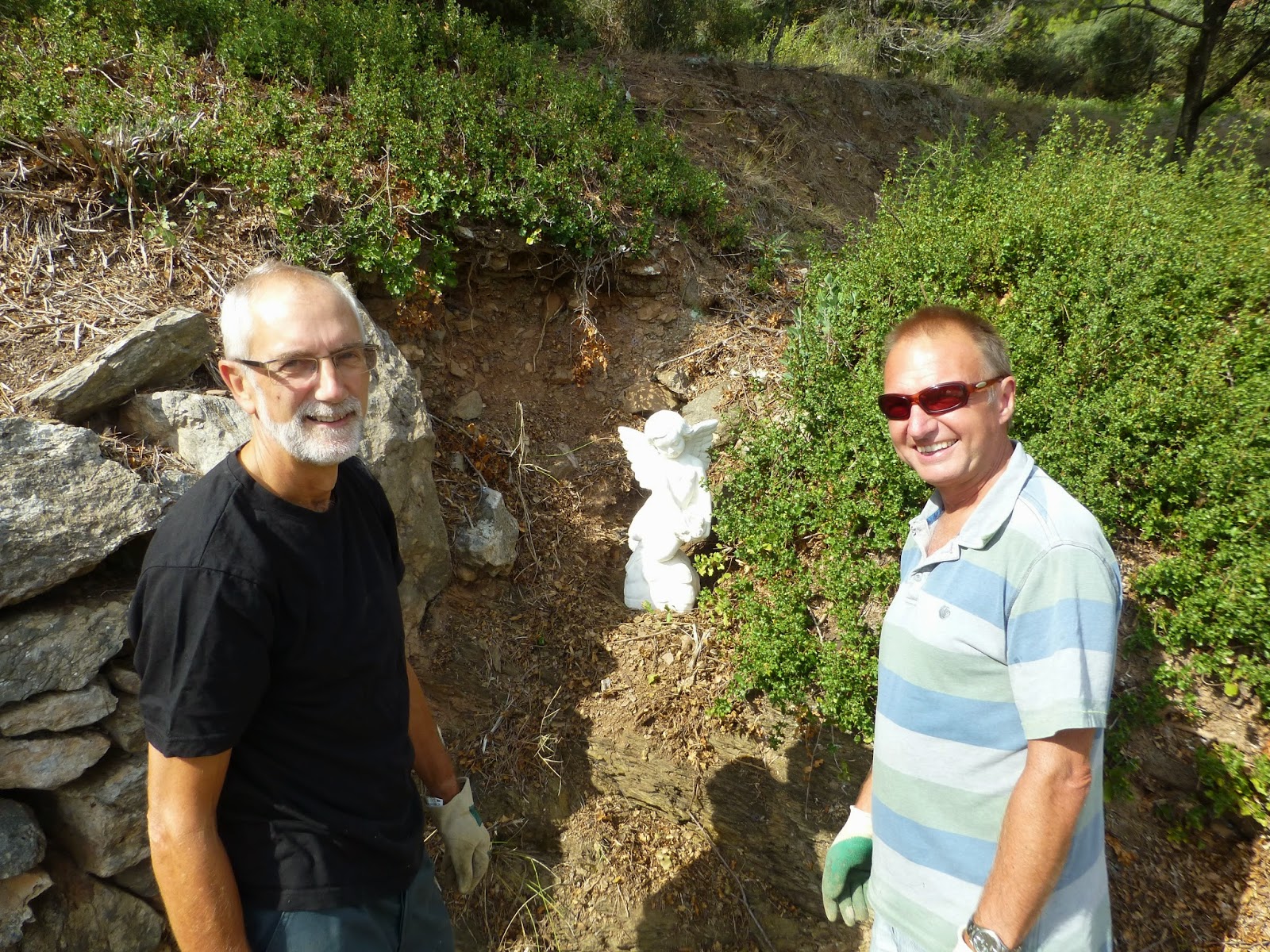 The mixing of the cement was considered....
I had used some quick drying mortar to cement in our mail box a couple of years ago…and there was a little  left over…. and it seemed sufficient, as we didn’t need much of it. 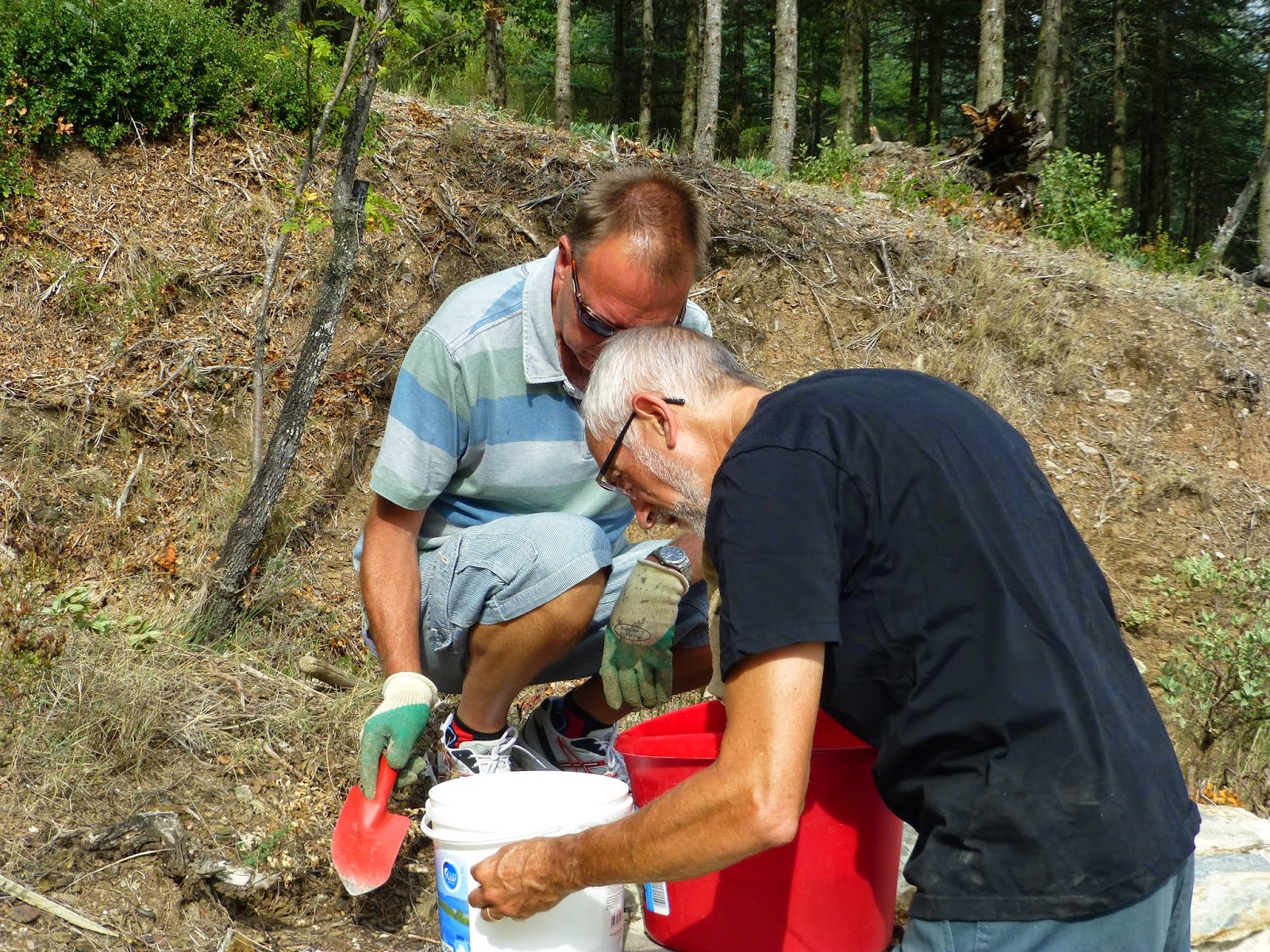 The men had done well, they were confident......Mark mixed….saying, I part powder, 4 parts water……

They stirred, and waited for it to turn into a thick paste….and waited, and waited…..and then I read the instructions to the workers…
.
4 parts powder, 1 part water…..oh well……men, of course, never need to read instructions do they ! 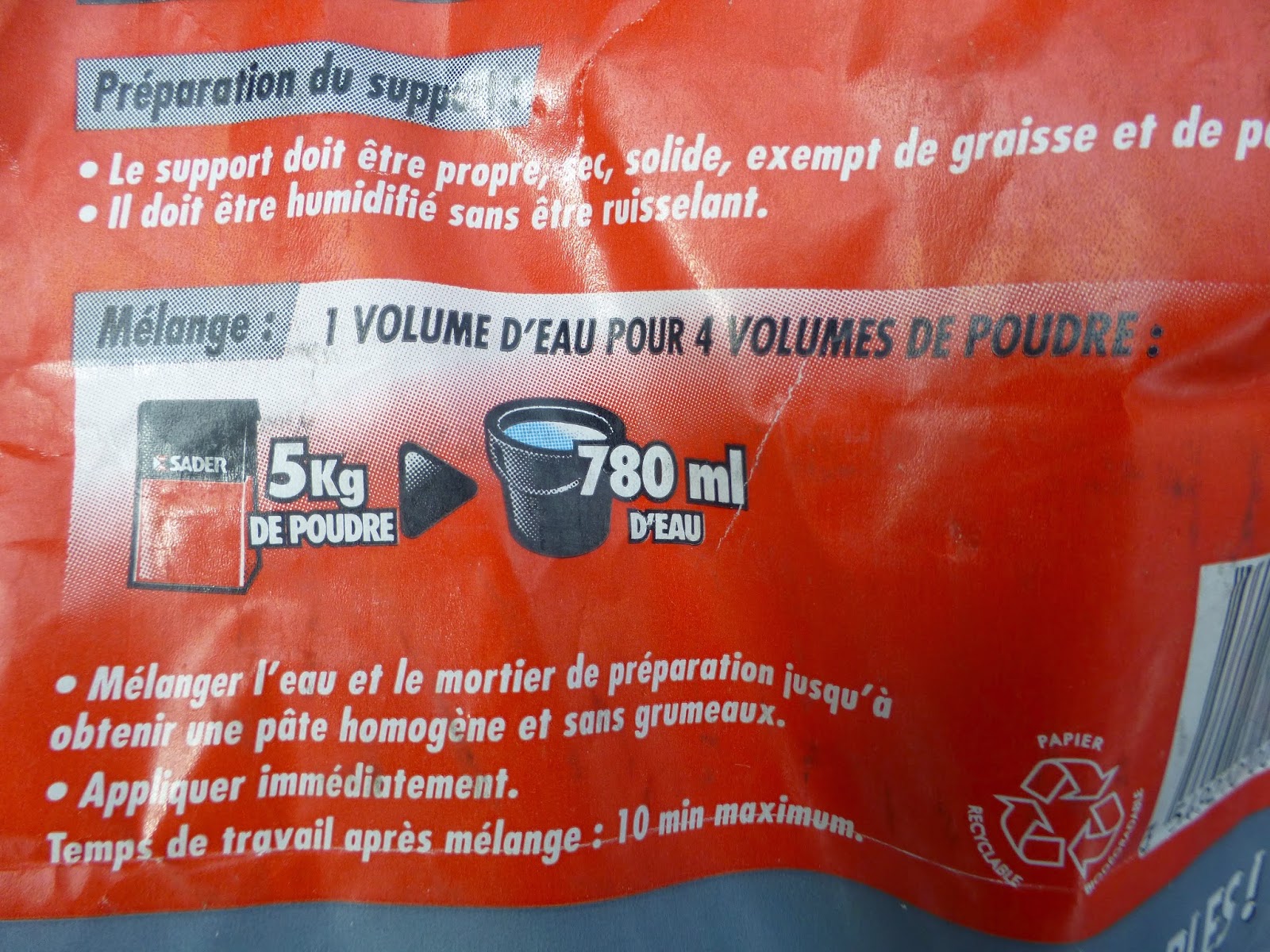 As I was taking photos of the whole process… I was threatened with death and destruction as Mark realised that this was likely to make it into a blog.

Our flying baby is actually pretty secure on her ledge, but will be cemented in more effectively when we have mixed up the correct thickness of cement. 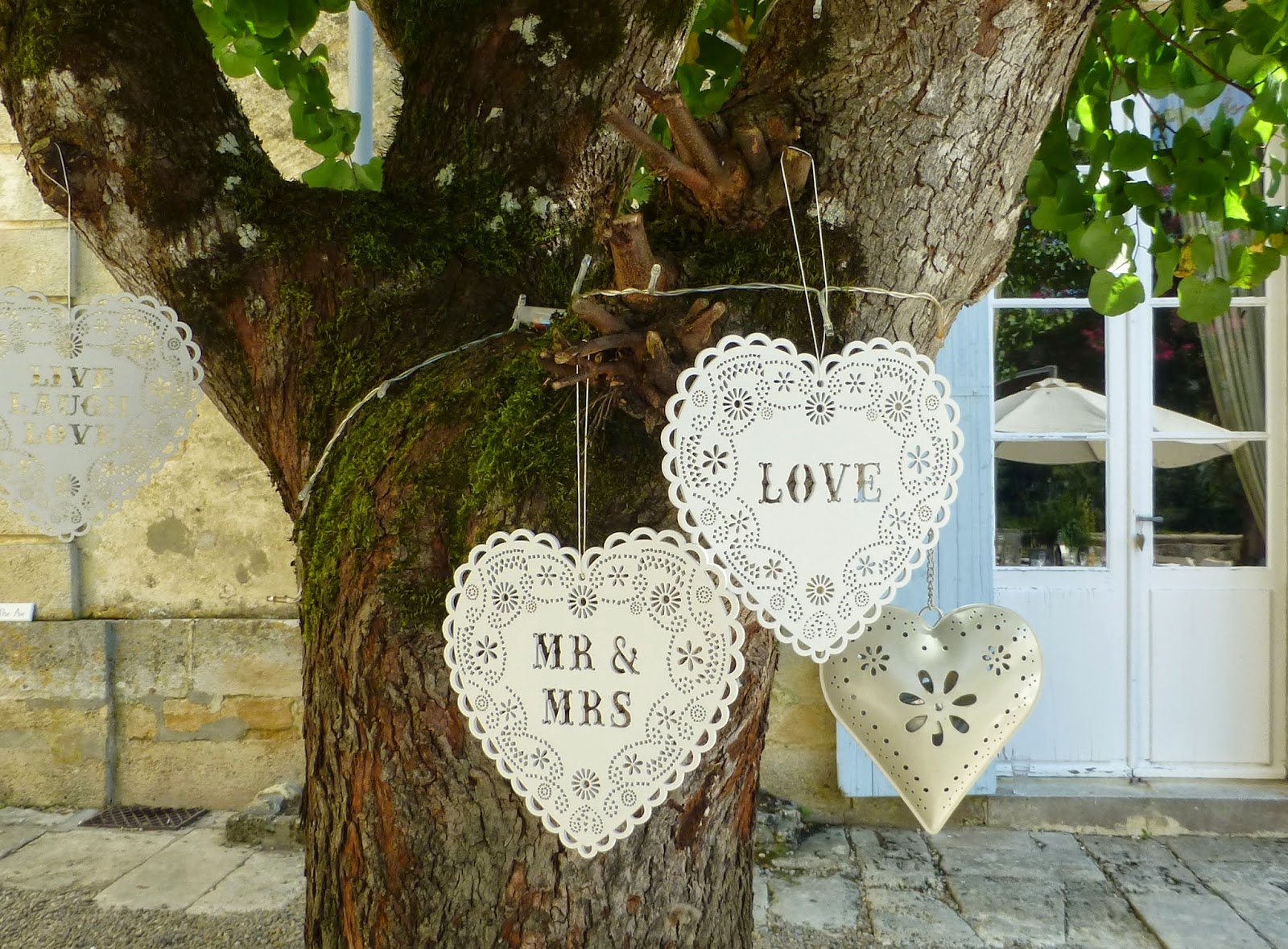 Two years ago, Mark’s nephew, Mark, and Shardae, his long time girlfriend, announced their engagement to our side of the family, while they were staying at our house here in Caunes.

Shardae has a reputation for being incredibly motivated and organised….and I guess, from the moment of the engagement ( or maybe before ! ) she began to plan the wedding.

Straight after leaving our house 2 years ago, the engaged couple drove to Bordeaux, where they had identified a chateau they thought might be perfect for their wedding.

It was....and the serious planning began.

This last weekend, the wedding took place at the beautiful Chateau Lagorce In Haux, close to Bordeaux. 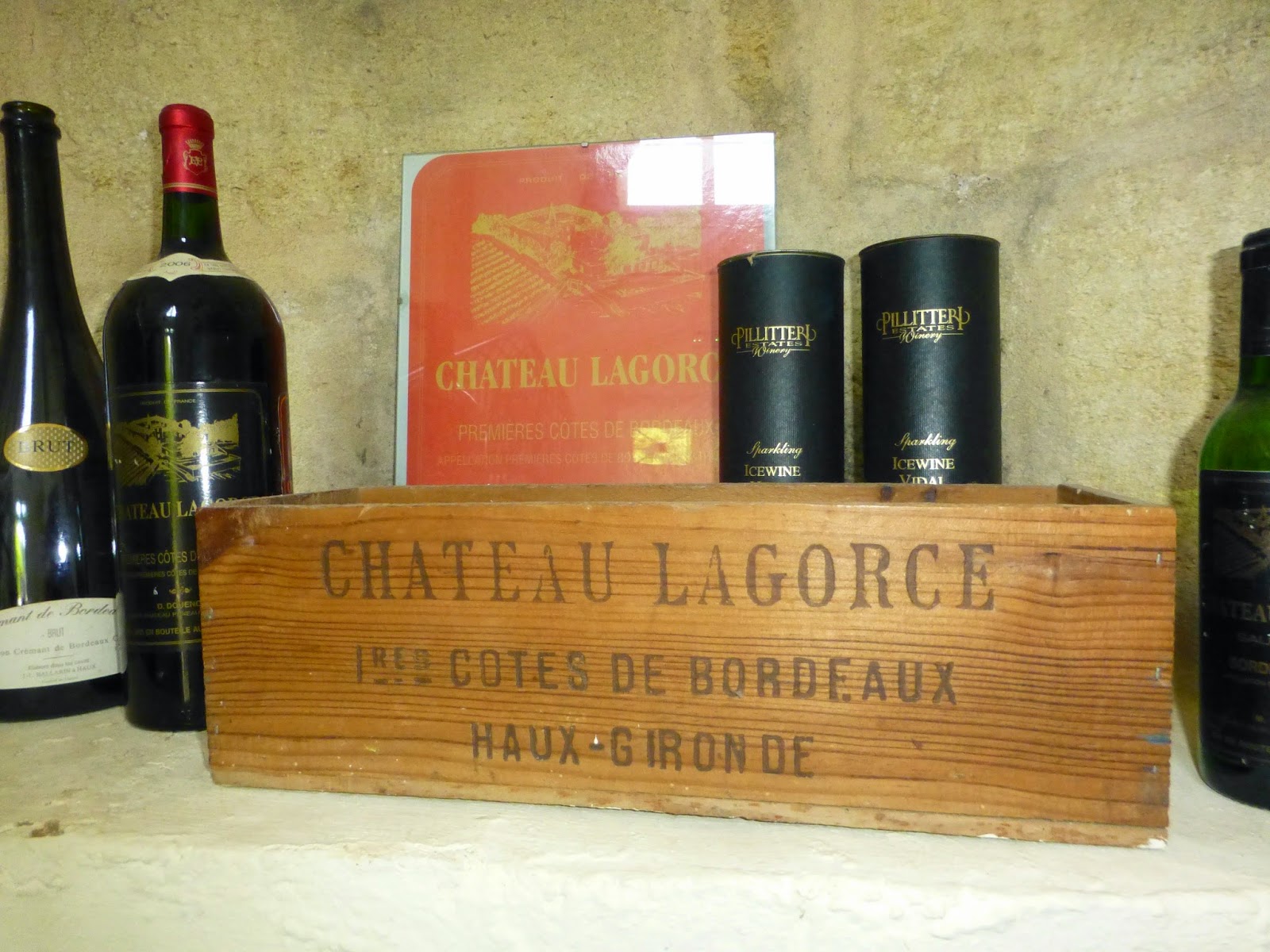 
The detailed organisation that had gone into making the 3 days and nights celebration perfect was amazing. 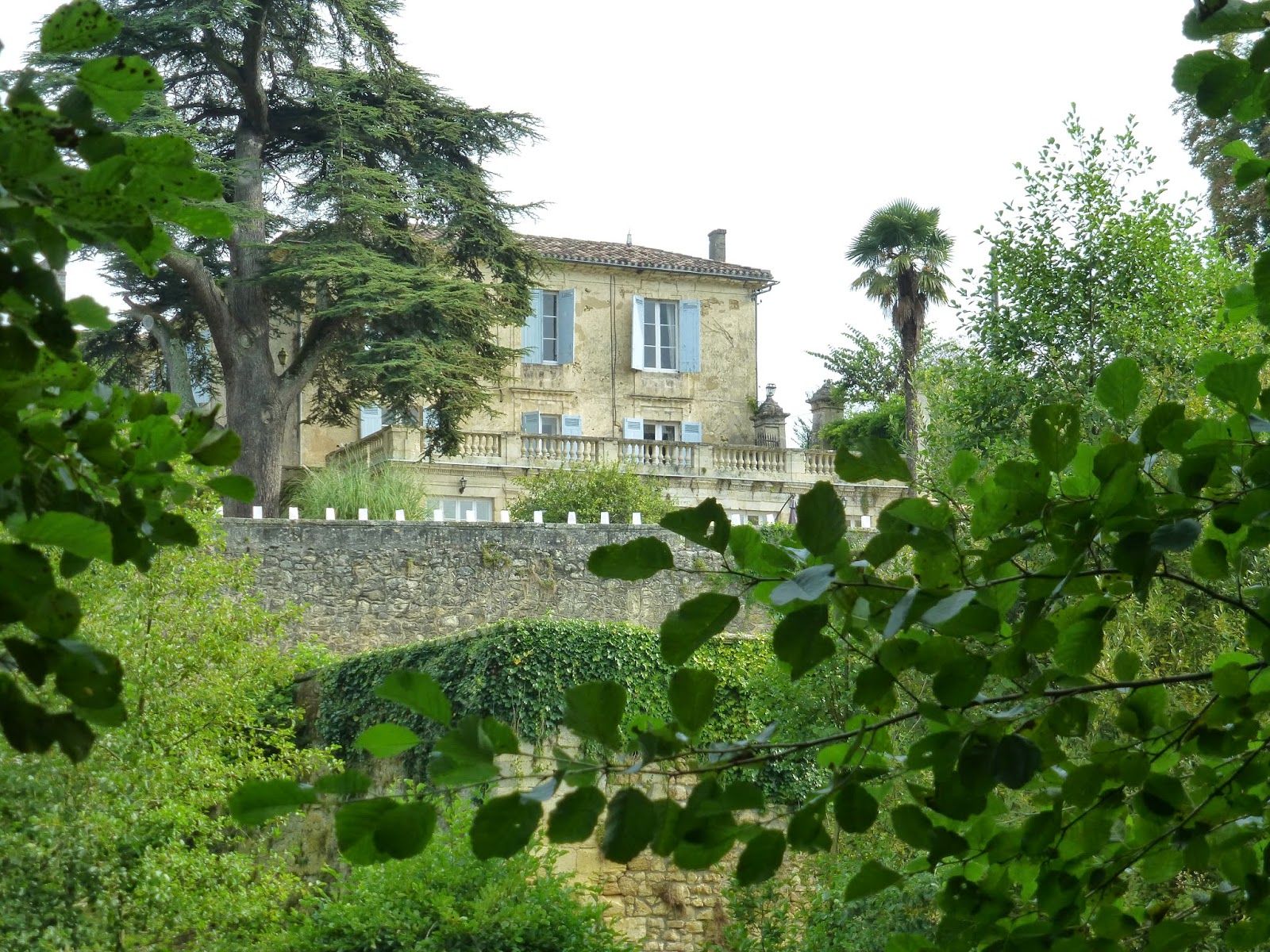 I overheard one of the ushers talking about the fact that a couple of the paper bag lanterns which lined one of the terraces, had fallen over. He said that Shardae would know exactly how to sort it out as she had probably known it would happen many years ago…as it was clear this wedding had been in the planning stages…probably since she was born.

We had the run of the chateaux for 3 days, and everyone helped get things ready for the actual wedding celebrations.

The weather was glorious.

The setting was incredible……and everything went perfectly.

As always I take many many photos…so I will let some of them tell the story of the fabulous time we all had.

Two years ago we were fascinated by a concert in one of the Caunes marble quarries. The incredibly talented “Ensemble Opalescences” ventured into the carriere  de Villerambert on the outskirts of Caunes and performed for a strangely clad audience. We had to wear hard hats and were led through the quarry to a temporary stage, set amongst the cutting machinery and sheer cliffs of pink marble.  We were really pleased to see they were repeating the event this year. ........This time, we had to wear high vis jackets as well. 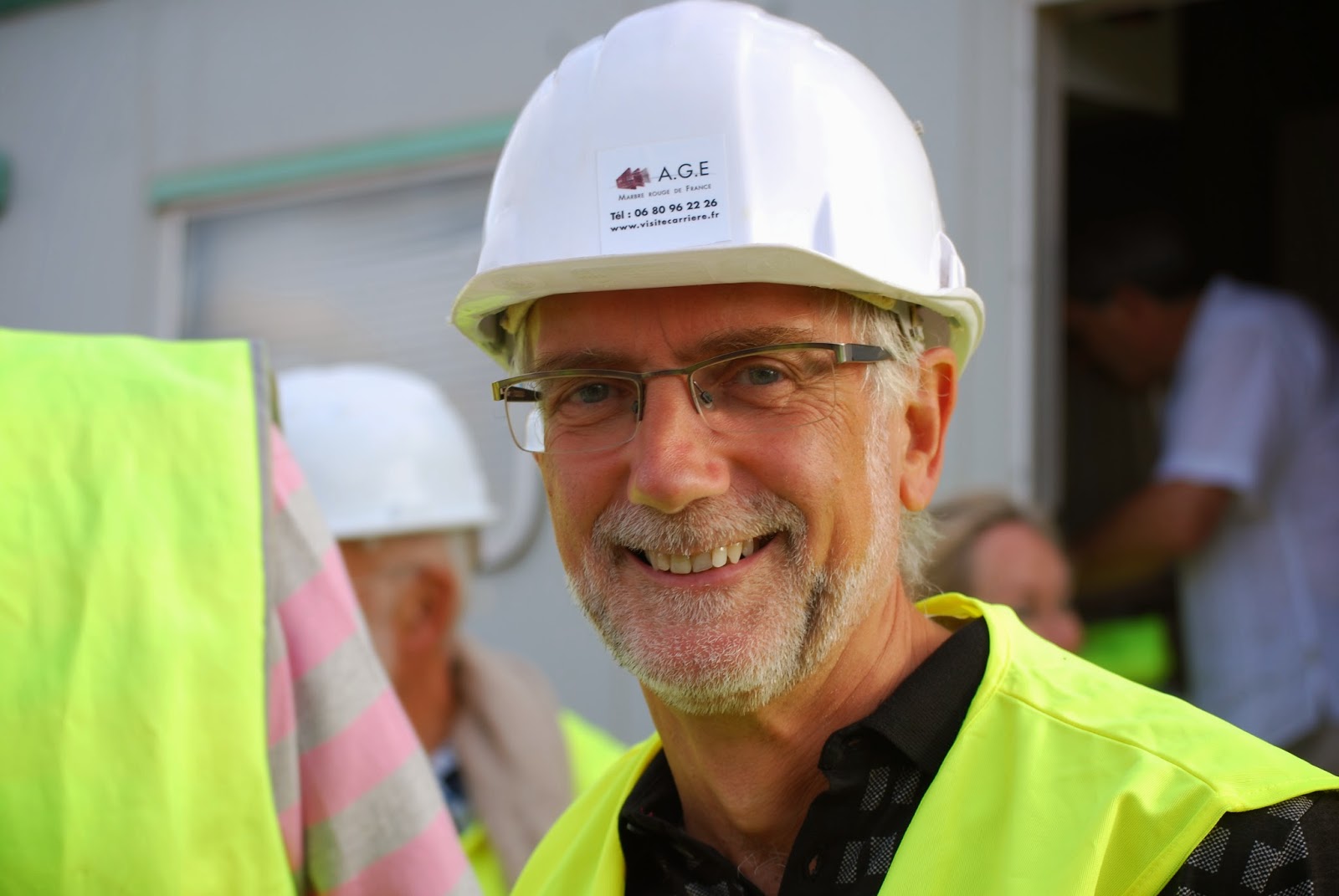 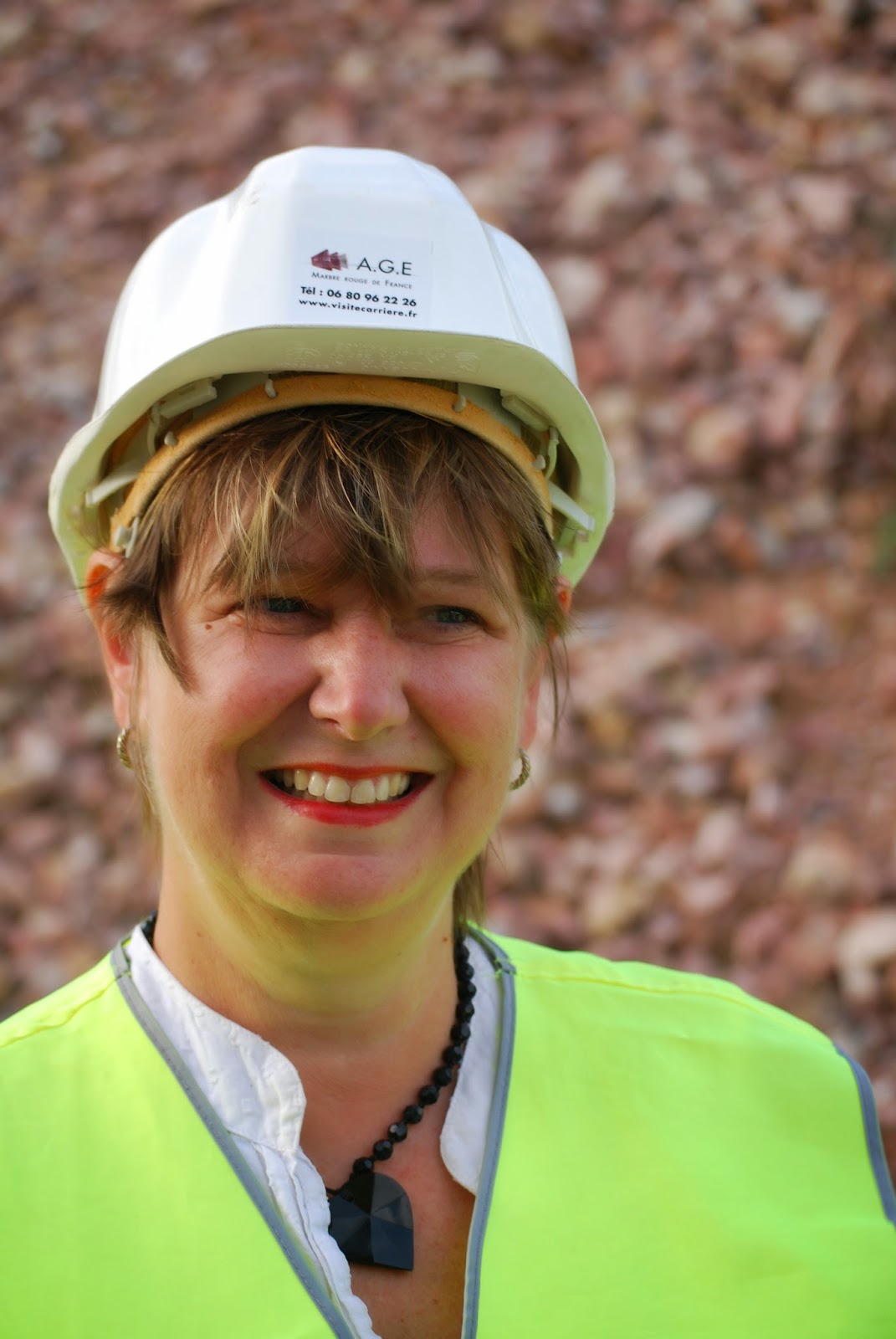 Their performances were spread over 3 days this time. One concert being held in the church in Caunes, the second, back in the quarry, and the third at le Chateau de Paulignan in nearby Trausse. 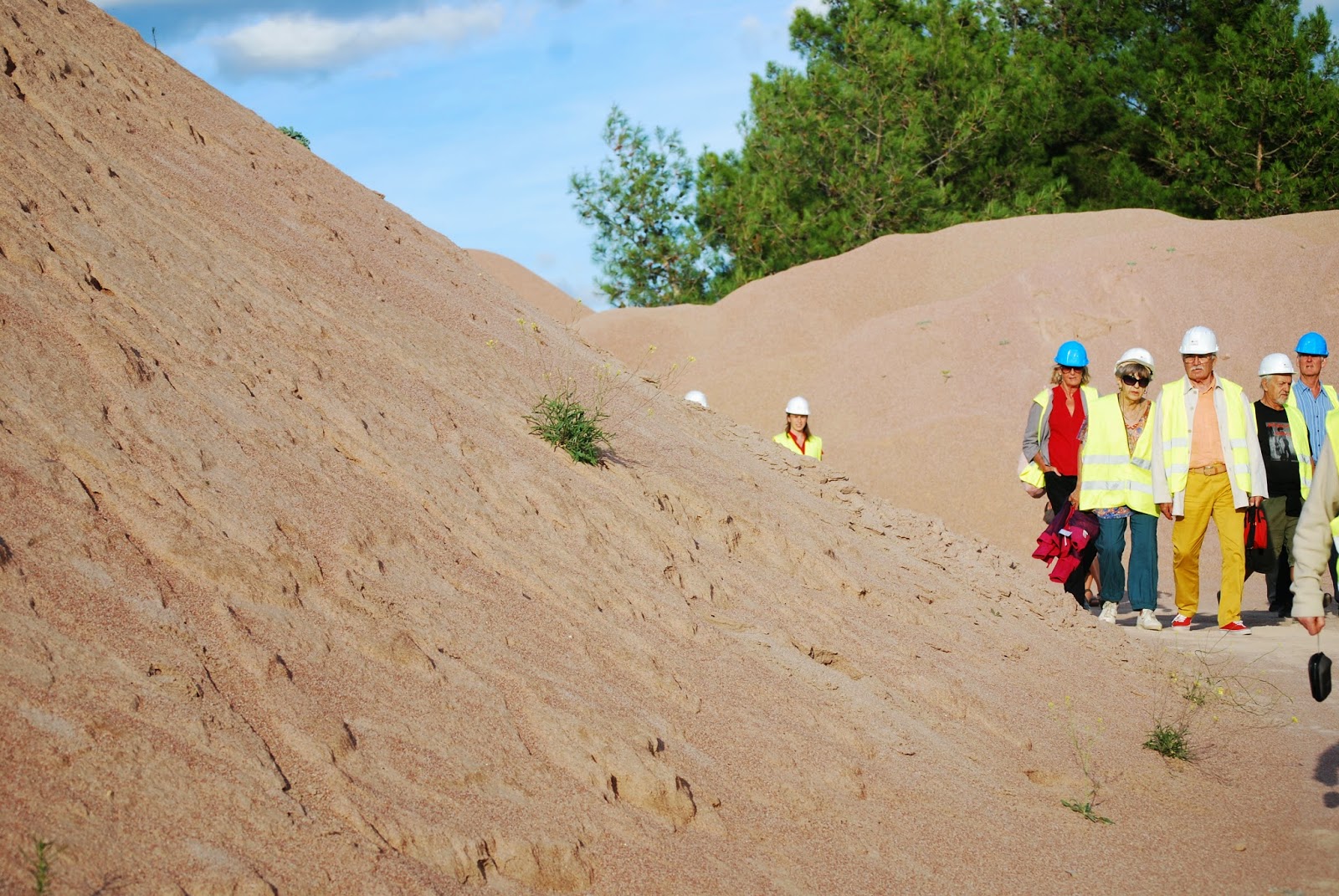 We went to the concert in the quarry, which included poetry and dance as well as the fabulous baroque musical performance of Ensemble Opalescences. The concept was to display a dialogue between the musicians and a dancer, relating to the relationship of baroque dance and music from France and from Italy.

It was completely enchanting.

Saskia  Salembier, the outrageously beautiful and talented violinist and mezzo soprano ( she didn’t sing in this concert, which was a real shame, as we loved her voice 2 years ago…but if we had looked more carefully at the programme, we would have known this ! ) introduced the concert. Her playing was magnificent, as was that of the other 2 musicians.The acoustics within the quarry space were wonderful. There were no microphones, no amplification…but every word  and every note was crystal clear. Let is be said…that Mark is still completely enchanted by Saskia…..and I feel that he is absolutely entitled to be so…she is incredible !

The dancer, Irene Feste, was wonderful. Her dress matched the tones of the marble background against which she performed. Some of her incredibly delicate steps seemed very formal, and later as she took on the Italian commedia dell’arte side of the performance, it seemed much more intuitive and improvised. There was a real dialogue with the musicians……and although it was good to have a visual focus she never took attention away from the intricate power of the music. 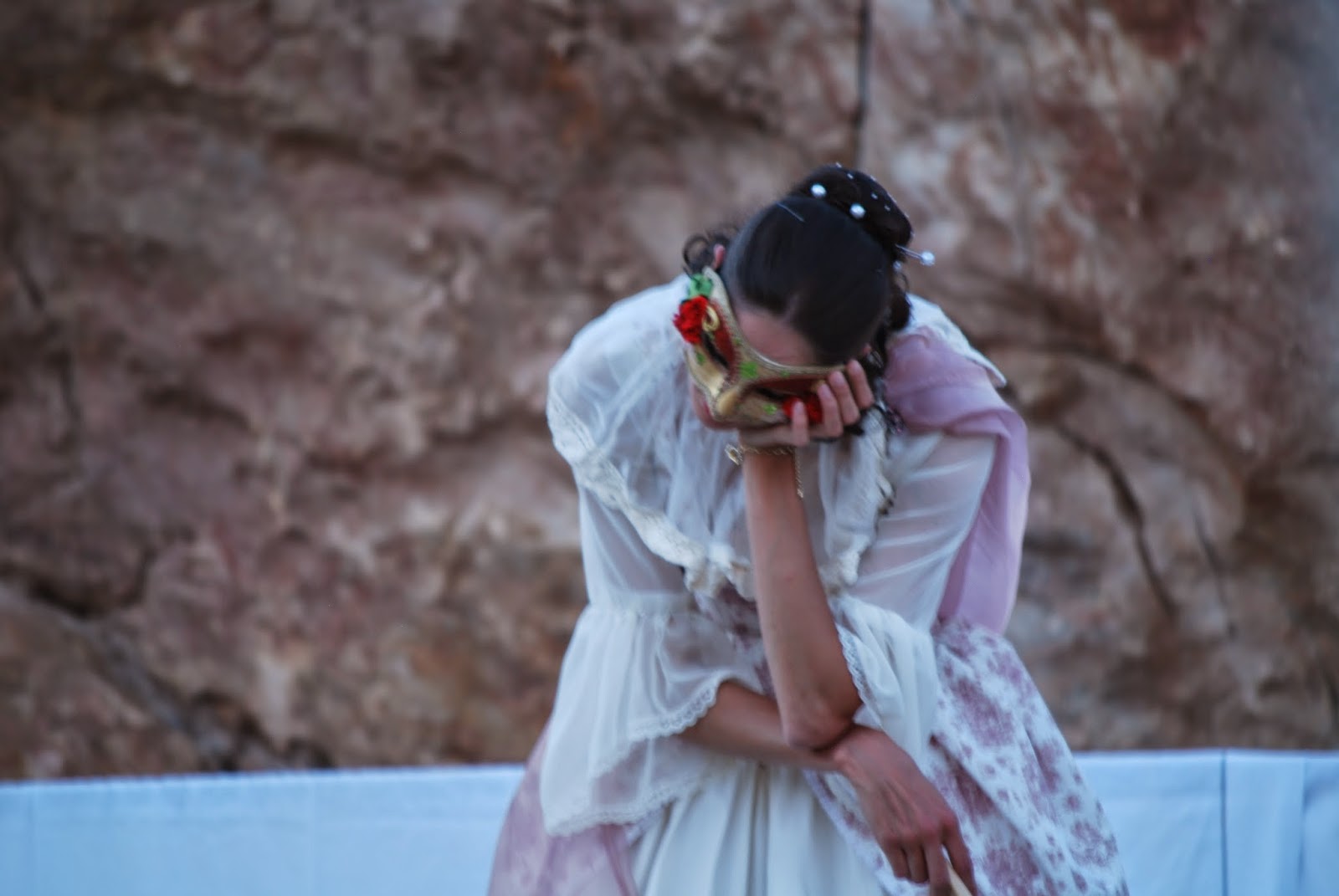 We were slightly disappointed that the after concert buffet was held at the quarry entrance, on a couple of trestle tables, rather than in the gorgeous courtyard of the Chateau Villarambert as it had been 2 years ago. However, it did not detract from what had been a wonderful evening.

As we walked back to the car park, the sky was turning various shades of pink just as darkness approached. It matched the dancer’s dress and the pink and red tones of the marble that surrounded us. 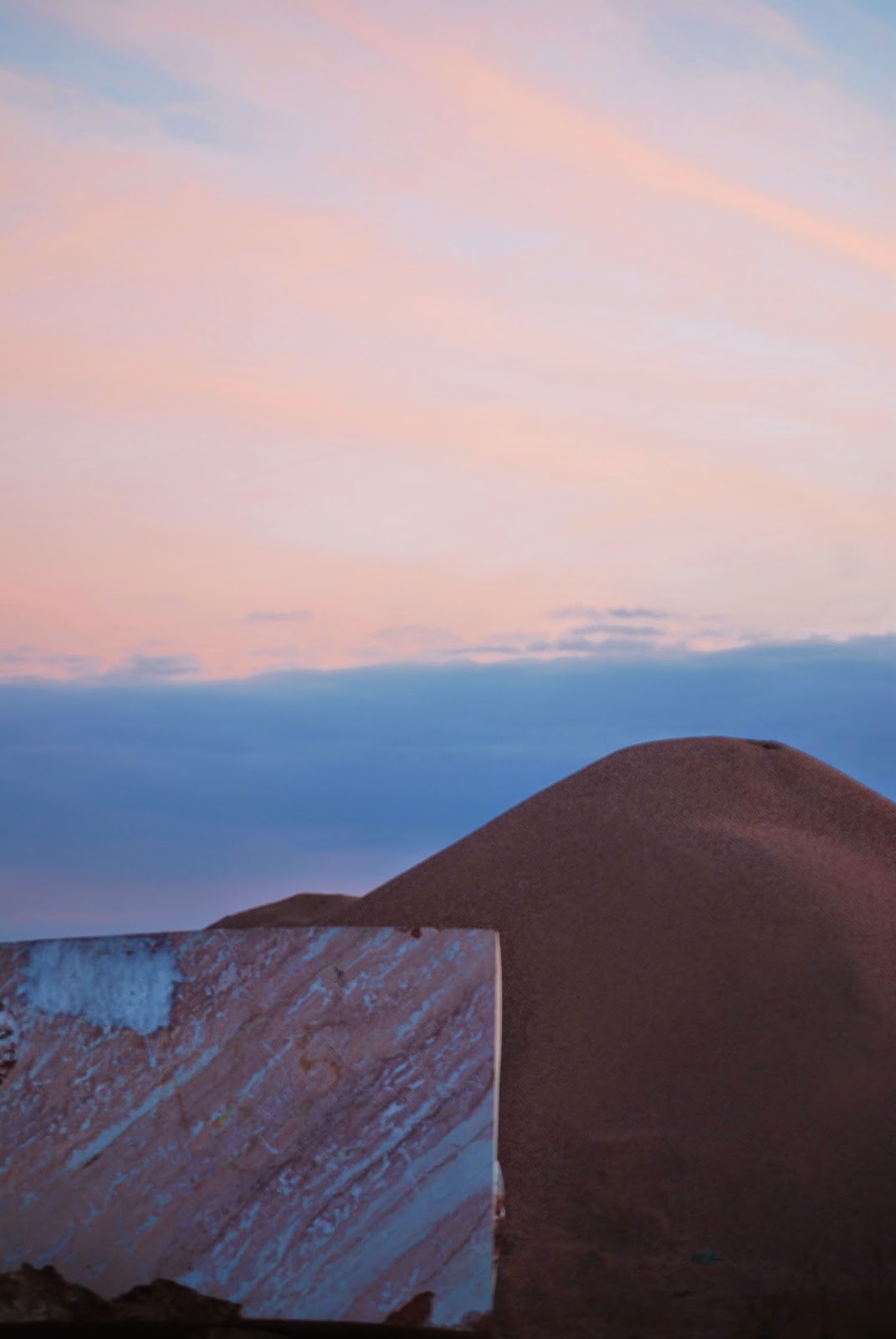