A warning of posts to come

I have just returned to Caunes from a 6 day trip to Spain. I went to see Bibi in Benicassim and then travelled down to the far south, to see Annie in Alcala la Real.

This is just a very quick post, to say how much I am looking forward to catching up on all my favourite blogs that have been published while I have been away...and to warn you that a few posts from me, probably some from Annie, and at least one joint blog will be appearing soon !

Those of you that know Annie and I will have imagined that we would have a good time, getting together at last. I think it is fair to say that we did.....and our adventures, short though they were, will be documented here. 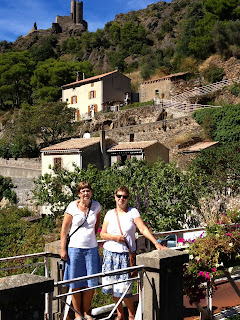 The Visigoths, who were a Germanic tribe, challenged the Roman Empire in its dying days. They occupied this part of France from about 400 – 500. The Visigoth Kingdom’s capital was in Toulouse until the Franks drove them into Spain in 507.


Evidence of their time in the Aude can be clearly seen in and around the Minervois village of Villarzel  Carbardes.  So last weekend, following  an article appearing in L’Independent, showing a guided walk, we went off in search of  Visigoth graves.
Setting off, between some houses, near the entrance to the village, on the D335,  ( after a somewhat frustrating drive around the village, looking for the starting point )we followed a reasonably well marked route which took us past some spectacular views, some fascinating local oddities, and eventually to les tombes Wisigoths. 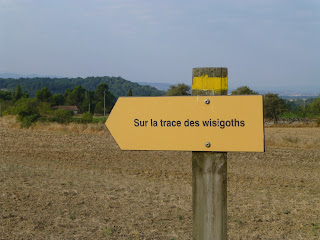 After walking through vineyards, where the grapes are starting to hang heavily from the vines, we passed the Chateau de Villarlong, which has been converted to apartments. It was quite a sight. The gardens contain a giraffe and some blue sheep….not what you expect in what looked, otherwise to be, a very formal French garden. 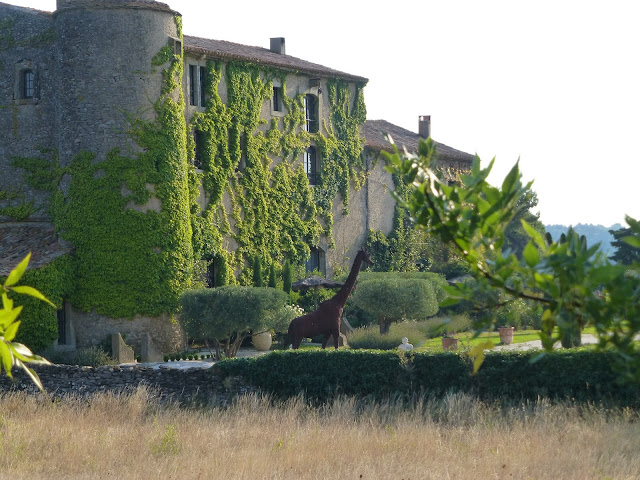 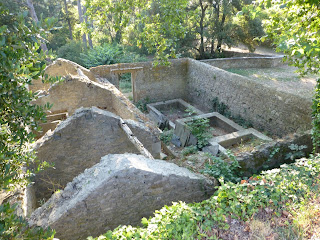 After passing some ancient lavoirs, we came to the church of Saint Pierre. It is almost a ruin…but has beautiful stain glass windows. They looked new, or recently restored, which all seemed a little odd , within the walls of an almost derelict building. Perhaps not so strange as the giraffe and blue sheep though. 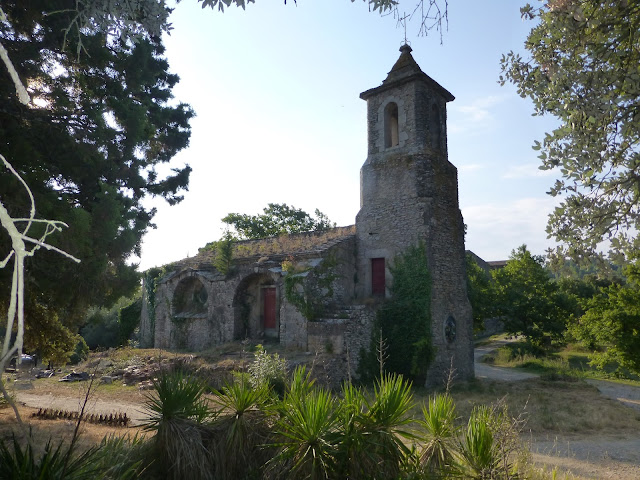 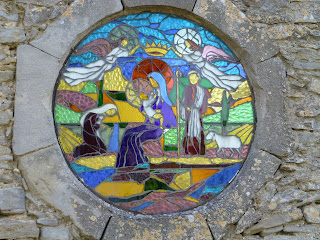 A further walk through vines and  past spectacular cypress trees led to the Visigoth cemetery. The site was excavated in 1967, but was well known , by locals, before that. It was known locally as la Colline des morts. 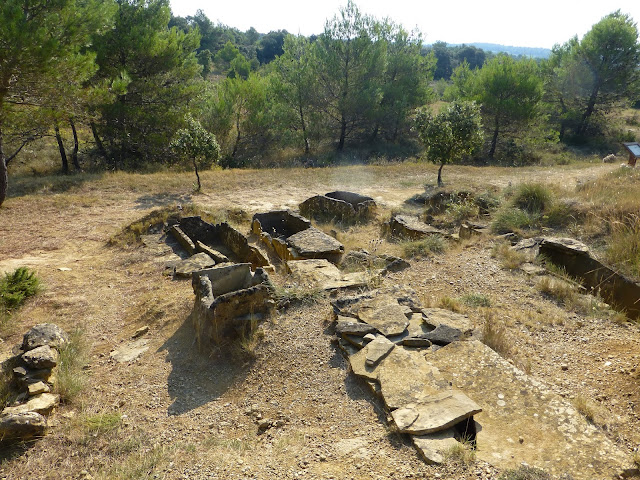 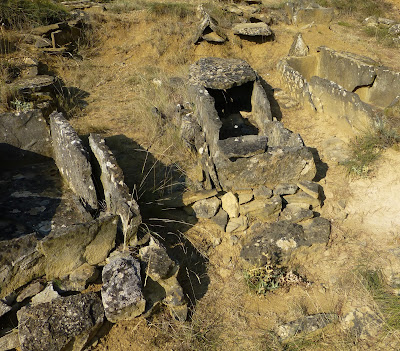 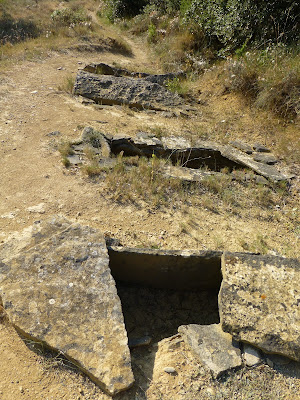 It dates from between the 5th and 7th centuries and contains 44 graves, arranged in family groupings  on a peaceful hillside. Artifacts found at the site includes earrings, bracelets, pottery  and drinking glasses. These can now be seen at a small museum in the village. 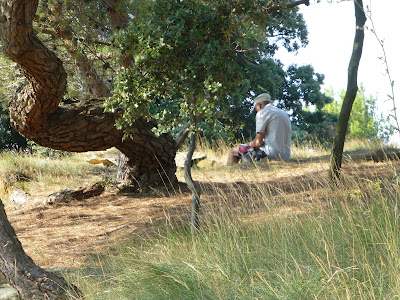 We started the walk early, to avoid the heat but by the time we had arrived at the grave site, the sun was quite high.  This was my first longish walk for sometime, so we sat for a while, under the trees alongside the graves. The ancient branches gave a subtle filtered sunlight to the peaceful, gentle scene. 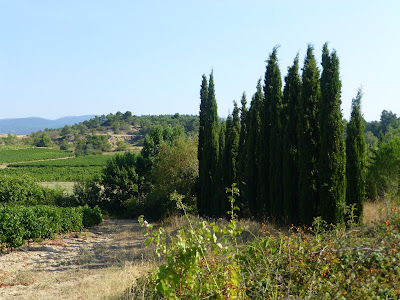 We continued through more open fields, and vineyards, and past some beautiful views of the mountains. This included Montagne d’Alirac….named after the king who led the Visigoth army when they sacked Rome in 410.
We were very tempted to pick the rose-hips and blackberries which seemed to be growing everywhere, and eventually wound our way back to our starting point.
The circular walk is about 7kms, and took us about 2 hours. It was all gentle walking, with no particularly difficult inclines…..perfect for me…….and , it was beautiful. 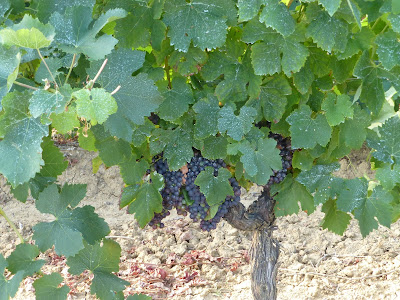 In just a few weeks Mark and I will be heading south, to spend a day or so with Bibi in Benicasim and then a few days visiting Annie near Alcala la Real . So..when the Feria came to town, it seemed like a good opportunity to practice ( I'm not sure what we thought we would be practicing….eating tapas maybe ? ).
The newspaper has been full of contradictory views about this year’s Carcassonne Feria. There have been no bulls here for the last couple of years….but this year, they returned, with all the controversy that was bound to follow. So, on one page the report was about the triumph of the kill, with all the gory accompanying photos of macho men in sparkly jackets plunging sharp sticks into stunningly beautiful animals…..and on the next, were reports about the protests. Forgive me for not including scenes of  animals dying in agony .
I remember seeing bull fighting near Avignon, where little flags were looped around the bull’s horns…but no blood was involved. This was clearly the full blown Ernest Hemmingway approved battle to the death stuff. At one stage of my life I thought I understood the fascination with bull fighting, but then I was very young, and was probably more fascinated with Hemingway than the bull fights.
Mark and I did not attend the bull fights.


However, we did wander into Carcassonne on Friday night to see what was going on in one of the town’s main squares.
We found tapas and sangria, plenty of wine, salsa and flamenco, and families having a wonderful time. 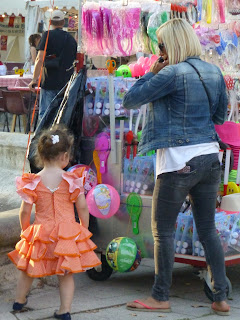 Another moral dilemma I faced due to the Feria ( the bull fight dilemma was not difficult to resolve, there was no chance that we would support such horrors), was: should I take photographs of people without asking their permission ?
I have always enjoyed photographing spectators at events. When I was at the London Olympics last year I approached dozens of supporters from all over the world, who then posed beautifully for me. I have taken crowd shots at various sporting events, and then possibly zoomed in on particular faces at the editing stage.
In Carcassonne, I shamelessly pointed my camera at people who were clearly having a great time. I also spotted some great costumes….particularly children who were joining in the fun and the whole spectacle. I couldn’t help myself. Should I have asked them if they minded ? Should I have found their parents and asked them for permission ? I wouldn’t have got such natural images if I had….but all the same…..I feel it wasn’t quite right.


I have been waiting for something important  to happen to report for my 100th blog. Then yesterday, I thought I had it….. It was Mark’s birthday and we decided to go for a walk to visit some Visigoth graves near a village a few kilometres from Caunes.


We set off early and enjoyed a fabulous 7kms walk. This in itself was a real achievement for me. I haven’t walked that far since my surgery last year.


The walk took us through vineyards where the huge purple grapes are starting to hang heavily from the vines. It took us past a beautiful old chateau with gorgeous formal gardens. It led us past a stunning ruined church, and along beautiful flower edged pathways. We saw birds and butterflies, and enjoyed every step of the trek.


Finally we came across the graves. There were 44 of them, arranged in small family groups, large and some incredibly small, all stone caverns,  some with slabbed tops, facing down a slope. We sat for a while, enjoying the peace, and the view, and the realisation that these , now empty tombs, had been on this beautiful hillside for about 1500 years.


I took many photos during the walk, and looked forward to my 100th blog being about our walk, interspersed with some beautiful images.


When I arrived home, I anticipated  time editing the photos, researching some local Visigoth history, and writing my…..100th blog.


The SD card is corrupted. I cannot access the photos. Or at least I can, but only through a wire connection……and the wire is in Hebden Bridge. My laptop here in Caunes will not recognise the photo card.


So…..here it is, my 100th post, with a borrowed photo, found by doing an image search.
It was solemn and beautiful, and I did take a photo from practically this position…..but alas, it is not my photo.


Mark’s birthday continued to be lovely. After our walk, we swam, ate a gorgeous lunch by the pool, dozed away part of the afternoon and went to a local restaurant for a fabulous meal with local Minervois wine. 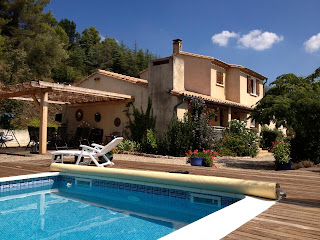