I missed the grape harvest last year, as it was just about this time of year I was diagnosed with cancer. I was cross for a number of reasons, as you can imagine. One of the reasons was that I had been looking forward to seeing my first French grape harvest....la vendange.


So, it has been sheer delight for me this year, partly because I wasn’t sure I would be here to see la vendange 2013, and partly because it has been so fascinating.
The first thing to say is that it has been late this year. Friends tell me that due to the long cold and damp spring, the grapes have been at least a couple of weeks behind this year. From my limited experience, I would say this is about right. Our figs have been 2-3 weeks behind where they were last year, and the olives seem even further behind.
We have a few vines ( about 25 ) on our land in Caunes. If all our vines produced as many grapes as the 3 on the right hand side of our little vineyard, we would be swamped. A few weeks ago, I was aware that some of our grapes were shrivelling up on the vine, some had certainly gone mouldy.....but some were spectacular. Suddenly, they enlarged, turned from pale green to a fabulous purple colour, and started to smell beautiful. I was worried about attracting les sangliers ( wild boars) onto our land from the forest land immediately behind our house, so I picked the ripe grapes and made them into some very good grape jelly, and picked the mouldy/ shrivelling ones, and gave them to the very grateful compost heap. I should add that les sangliers arrived anyway, and caused damage to the vegetable patch, foolishly placed (by me) right next to the vines.
Within 3 or 4 weeks of my own grape harvest each drive through the Minervois countryside began to be hampered by the traffic involved with la vendange. The huge grape harvesting machines became a familiar sight, and following tractors, pulling large open wagons, piled high with grapes became a way of life.
Signs at the side of the roads urged motorists to have patience due to la vendange, and the spilt and split grapes on the roadway made tyres squeak, and made the air smell of rich dark fruity wine. Mark thought something was wrong with his new bike, when he heard a sort of squelchy sound......it was the tyres making their way through grape juice. The bike smelled decidedly alcoholic when Mark came home. ( please note...it was definitely the bike...not Mark ).
I should have been thinking about blogging when all this was going on....but for some reason I wasn’t. I wish I had taken more photos of the actual harvesting. It was taking place all around us.


By the time we left the Minervois, for our winter trip back to England, the grapes were “in”, the Co-ops were closing their doors, and the vines had started to change colour. It was almost as if, the leaves knew that once the grapes were picked, they weren’t needed anymore. They no longer needed to provide shelter for those beautiful swelling voluptuous luxurious berries.
Within days, the leaves started to curl and crisp, to redden and yellow. Vineyards which days beforehand had been lush green with huge bunches of purple hanging jewels, were swathed in reds and oranges, yellows and browns.
It was beautiful and mellow and gentle.
After the furious activity of the work involved in gathering the crop, the countryside was quiet again. The activity was now taking place in les caves, in the Co-ops, in les chateaux, les domaines and the little garagista’s wine making premises.


I have no idea whether the 2013 Minervois wine will be good or not, but I am so pleased to have been able to observe some of the activity that has been involved in creating it. I look forward to sampling some of it !
Posted by Janice at 18:51 32 comments:

The prize was Pau.

A few weeks ago, when my friend Jan was visiting Caunes, we spent an interesting couple of hours at L'hotel de la cite, in Carcassonne. 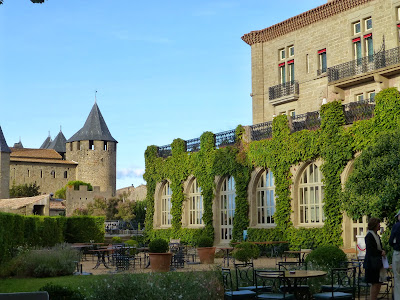 Mark had played in a golf tournament in Carcassonne earlier in the day. He had enjoyed it, played reasonably well, and thought attending the prize giving reception at l'hotel would be interesting, as we had never been inside it before.

It was a pleasant evening, wine and canapés were served and the views from the back of the hotel, where the reception was held, were fabulous.


Then....surprise, surprise, as les prix were being announced, I heard Mark's name. He had come second in his particular group. His prize, was 2 nights in a hotel in Pau. We were delighted. I was particularly delighted as this prize did not take the form of a revolting plastic golfer or cup or badge or other monstrosity, the like of which are banished to a hidden corner of a bookcase in Hebden Bridge.

Yesterday, we returned from our trip to Pau. We went by train, from Carcassonne, changing at Toulouse, through Lourdes and onto Pau. It was a brilliant train journey. The Pyrenees looked fabulous, Lourdes looked as bizarre as it always does, and we were able to chat, read and relax as we watched the country side go by. 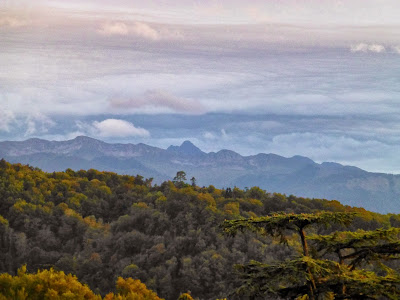 Sharing a compartment with a young French man, pony tail tied into a stylish top knot, while he read Zola's " Germinal" seemed perfect. ( Note to self: I will read "Germinal" in French sometime soon ). 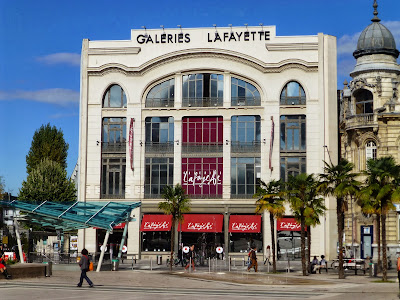 Pau is a great city. We wandered, visited the chateau, (and took the excellent guided tour....in French, and coped ! ), ate good food, looked around Galeries Lafayette, spent some time in the hotel pool and spa, saw an amazing sunset, people watched and mountain watched.

All this would have been good, but the whole experiences was considerably enhanced by the hotel deciding to upgrade us. Instead of the normal ( very nice) hotel room in this 5 star establishment, we were given a suite, with living room and balcony overlooking the mountains, bedroom, with balcony overlooking the mountains, dressing room and bathroom. The bed was huge, and the complimentary cakes, bon-bons, fruit juices, nuts and other little treats kept appearing.

We checked on the prices of the stay......the room suite alone would have cost us well over 1000 euros for the 2 nights. So, I continue to be impressed by the quality of prizes at the golf club !

I have suggested to Mark that he introduces such sponsored prizes at his golf club in England.....where they delight in awarding monstrosities as previously described. I don't hold out much chance. However, if Mark wants to carry on playing lots of golf in Carcassonne, I will continue to approve and wish him luck every time he heads off to play.

When we used to have holidays in Provence and we used to dream about having a house in France, I wanted one with lilac shutters.


Then, when we had settled on dreaming about having a house in the Languedoc, I just knew I wanted one with shutters.


The house we bought in Caunes has brown shutters.
Friends in the village told us that a few years ago, whilst painting their shutters, they received a note, from the Mairie, through the door, telling them to stop painting, as they had selected the wrong shade of olive green.
We were told that  if we decided to paint our shutters, we should go to the Mairie, look at their approved colour chart, memorise the colour, as the chart could not be taken from the Marie, and buy the said approved colour. We looked around the village and realised that were a number of so called approved colours and they were all quite muted, sort of "heritage" colours.
We have now spent 2 years considering painting our brown shutters……and yes, we quite like the “approved” olive green colour……So, went to the Mairie to look at the colour chart.


There, to our surprise, we were given a sample colour swatch to take away, to compare with the charts in the shops, and were told that it was “pas grave” if we chose a colour that was not exactly the same…..basically anything that wasn’t bright yellow would be “pas grave”.


So, it seems that times change.

We have decided that our house was built with brown shutters, and that it actually suits brown shutters. However, although we have saved considerable time and effort and expense by coming to this decision, it is good to know that should we change our minds, " C'est pas grave". if we don't quite manage to find the exact shade on the Mairie's list. 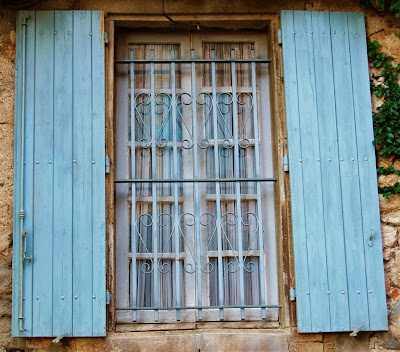 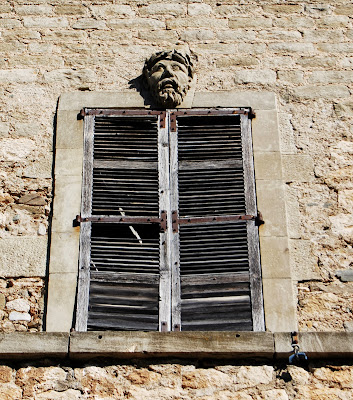 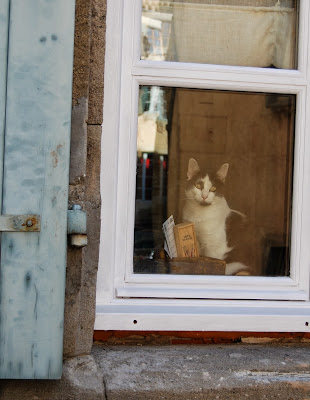 After the thrills of my trip to Spain, seeing Bibi and Annie, this seems very mundane. However, I have enjoyed walking round Caunes so much this morning.

Mark is off playing golf, the sun is shining and although it is a little cooler than of late, it is a glorious morning.

So, a post about nothing in particular, just a few doors and windows I noticed on my walk. Caunes has an impressive abbey, a well marked "tourist" trail around important buildings.....but I avoided these, and just looked at some of the more ordinary architectural features of the town. 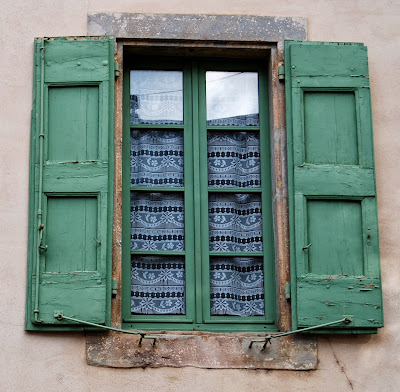 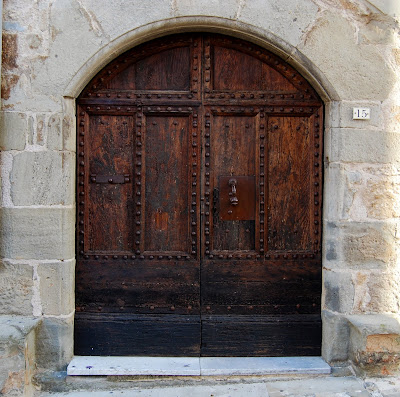 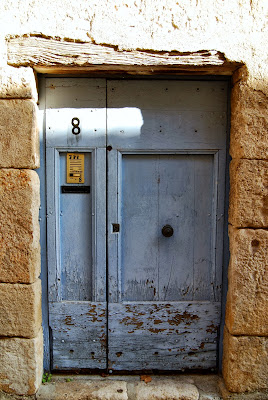 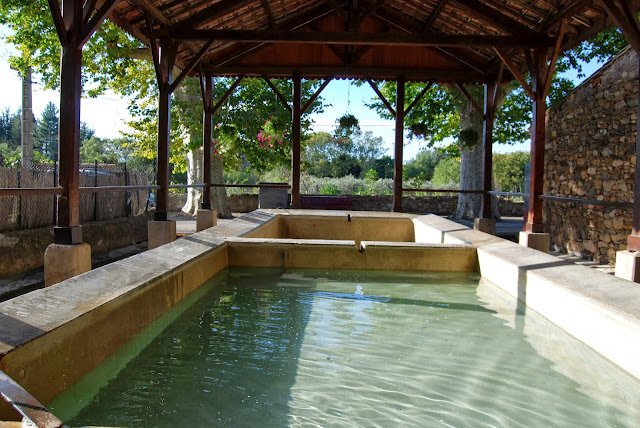 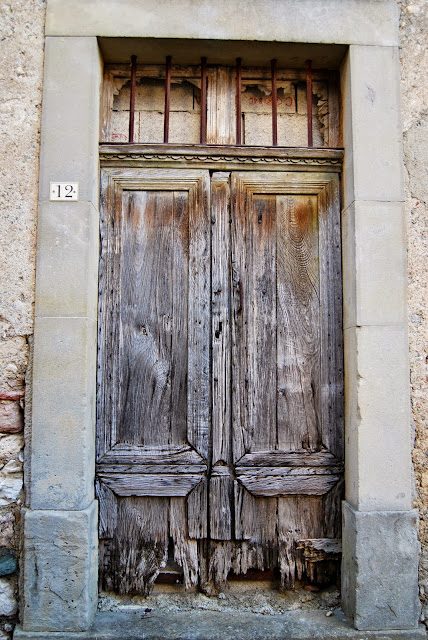 Visiting Annie part 2: Getting to know Casa Rosales....or the importance of Sadler tea-pots. 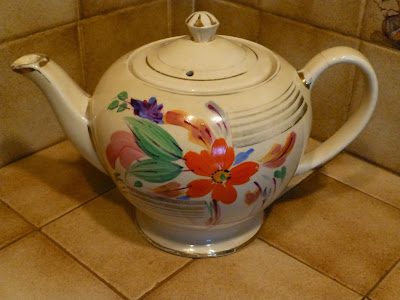