Settling back into life in Caunes is excellent, but not without its frustrations.


Mark has found he is speaking less French here than he does in Yorkshire, where he has a lesson every week and attends 2 informal language cafes. Apart from asking for things on menus, and the occasional need for a discussion in a brico shop….we have only socialised with English speaking friends.


We went to a delightful birthday celebration for an Irish American friend who lives in the village. None of the guests were French, although there was a fair mix of nationalities…..but the language spoken by everyone there was English. 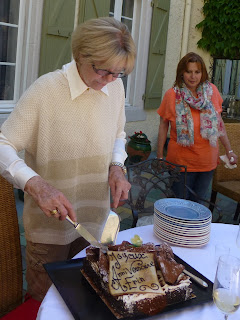 We attended the open day of a fabulous local garden, where advice on growing plants in the garrigue was available. The garden was stunning, and the English language tour was given by…..the English owner of the garden, who has lived in the village since the  mid 90s, developing a fabulous garden and nursery.
So….we’re watching some French TV, listening to French radio and reading the local paper every day. Mark has plans to start a language café in the local bar, encouraging people like us, who would like to improve their French, to meet, not in a class, but in an informal situation, where we can feel comfortable enough to make mistakes.


Mark also intends to enter French golf competitions as well as playing with his English speaking group, so he will get a chance to practice some conversation.
I don’t know what I am going to do.

When I was here on my own last year, I felt emboldened to make more effort. I seemed to bump into more neighbours than I have so far this trip. Now I feel a little isolated, and perhaps a little less confident than I did last year. Mark is raring to go, and wants to practice his French which he has spent so much time on improving during the last few months. So….this may become a theme for my blogging for a while…..how to feel more of a part of this lovely French place, and not just some English woman who lives on the edge of the village for a few weeks at a time