Cinderella does not belong here after all 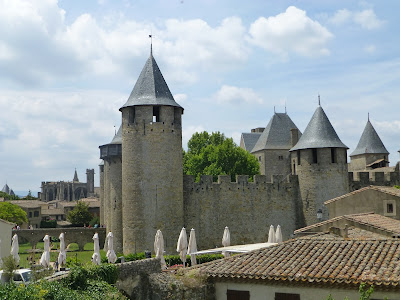 Having taken all our visitors over the last 2 years, to la cité, I admit to having become bored with it. I had got to the stage of thinking that if any more of our family or friends wanted to see it, they should go alone.


I had become sick of the crowded streets, the plastic swords and shields on sale everywhere , the poor quality food and even poorer quality service in restaurants that know they are unlikely to see their clients again…so why bother to make any effort at all.
I had read some of the tourist information and had thought that the 19th century re-building of much of the city had turned it into a Disneyesque travesty of what it had originally been.
I was wrong.


The plastic swords are still there, the cassoulet quality does vary between establishments, as does the service. However……it is unfair to accuse the 19th century architect Viollet-le-Duc with the Disney sin.
Just delving a little deeper than the immediately available tourist brochures, I discovered that apart from anything else, Viollet-le-Duc’s work only affected about 20% of the buildings. I discovered that there is much remaining evidence of building from Roman times, through to the 5th century Visigoth phase, the brief Saracen occupation in the 8th century, and considerable proof of what was built when and how from the 11th century Trencavel period, through the Albigesian Crusade, the foundation of the bastide town, now the modern Carcassonne, and on into the 19th century when Napoleon influenced things, removing its' military significance and finally restoration work and recognition of the historical importance of the fortifications over the previous 2 centuries.


I knew I loved the basilica St Nazaire, and not just because of the Russian singers I have heard performing there on several of my visits. Now I know about the original medieval glass, and the 12th century elements…I am thrilled, and already looking forward to my next visit.
I became interested in the Trencavels last year when I learned about the Albigensian crusade, the Beziers massacre of the Cathars in 1209 and the siege of Carcassonne in August of the same year.
Apart from playing such an important part in the crusade called by Innocent III to seize lands held by Occitan Lords ( like Trencavel) who tolerated heresy ( in other words…those who followed the “good men”, who preached equality, chastity, humility, forbade murder, theft and lying, abstained from eating meat, accepted death as deliverance and rejected symbols such as the cross ), Carcassonne has been the fortress marking the border between Aragon and France. It was the 17th century before the modern border between France and Spain was established, removing this strategic role for Carcassonne.

The existing buildings are much more authentic than I had realised. Little documentary evidence about the various stages of building exist, but the actual stonework of the different building phases, over 2 thousand years provides the evidence of its continued development and importance over the centuries. 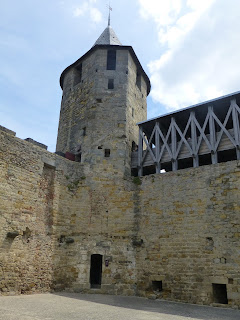 The Disney look is deceptive…..some of it has been re built, hoping to capture some of what it might have looked like, but much of it is the result of change upon change as different architectural styles developed and the needs of the fortress city changed.
My next visitors will be encouraged to see la cité, and I will love taking them there, plastic armour and all.