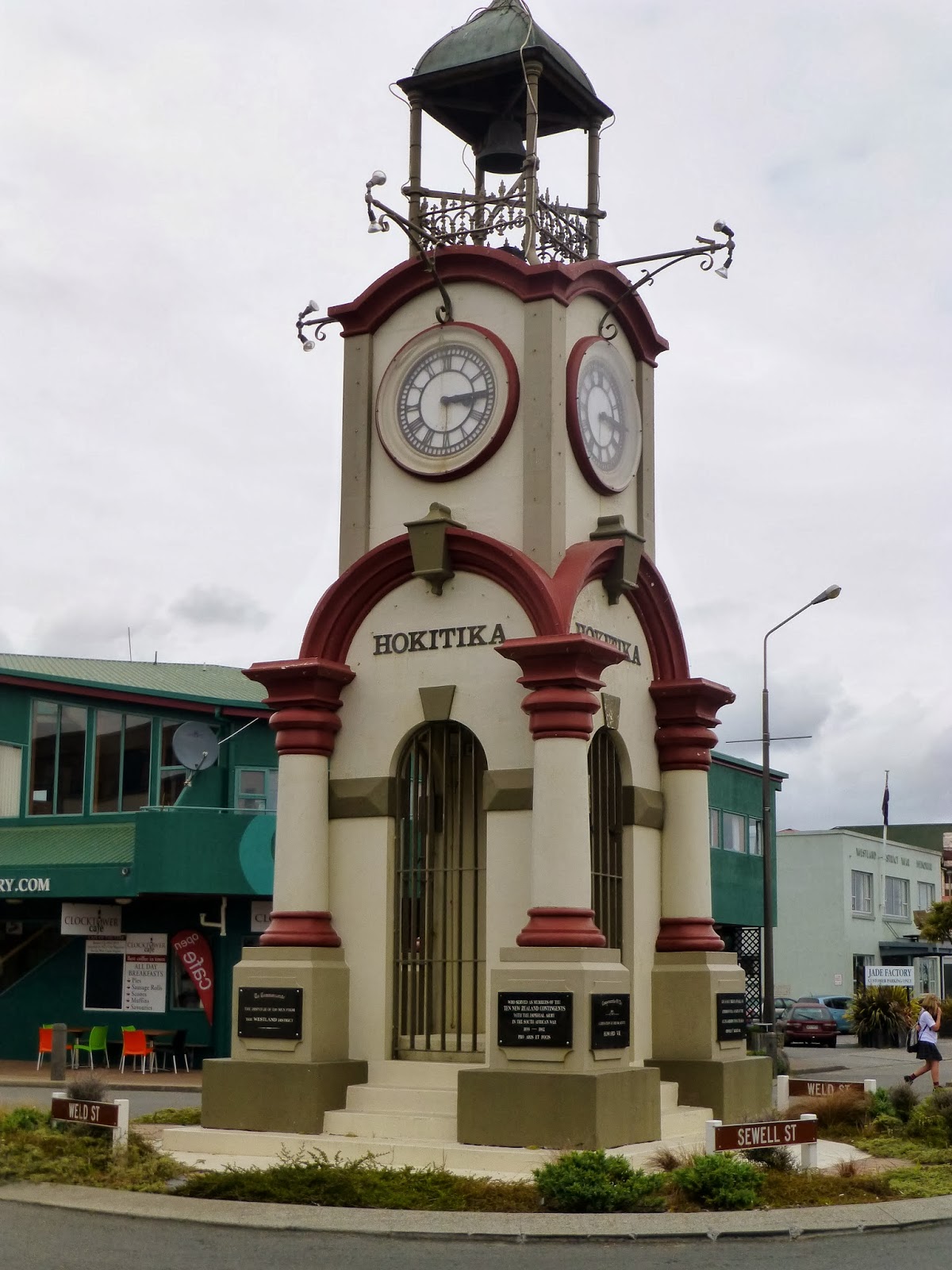 I hardly know where to start with this post. I have been back in the UK for nearly 2 weeks. The jet lag has passed and we have caught up with the grandchildren who have not forgotten us after our 5 week absence. I have started to wade through the 1500 plus photos that somehow managed to get taken, and I am now trying to put some thoughts together about our epic trip.

It was a "holiday" during which, every day Mark and I would look at each other and recognise how special it was. Every day was a brilliant adventure, every day involved us doing something amazing. That can be exhausting after 35 days, so in a way, I am pleased to be home, and am enjoying reflecting on all we have done.

The family bits were important and already I know that some of the lasting memories will be about the times I was able to spend with my cousins. We know we love Australia, despite misgivings about the political climate there at the moment.( I have misgivings about the UK and the French political climate too....so not much difference really ! ). I was very sad to leave Melbourne on 7th February, as it marked the end of the Aussie section of our trip. Melbourne is a fabulous city, and we had 10 glorious days there, enjoying the wonderful weather, the tremendous museums and galleries, the out of this world coffee and cafes and restaurants, and the proximity of my cousins J &N and being able to meet "new" cousin Linda for the first time. 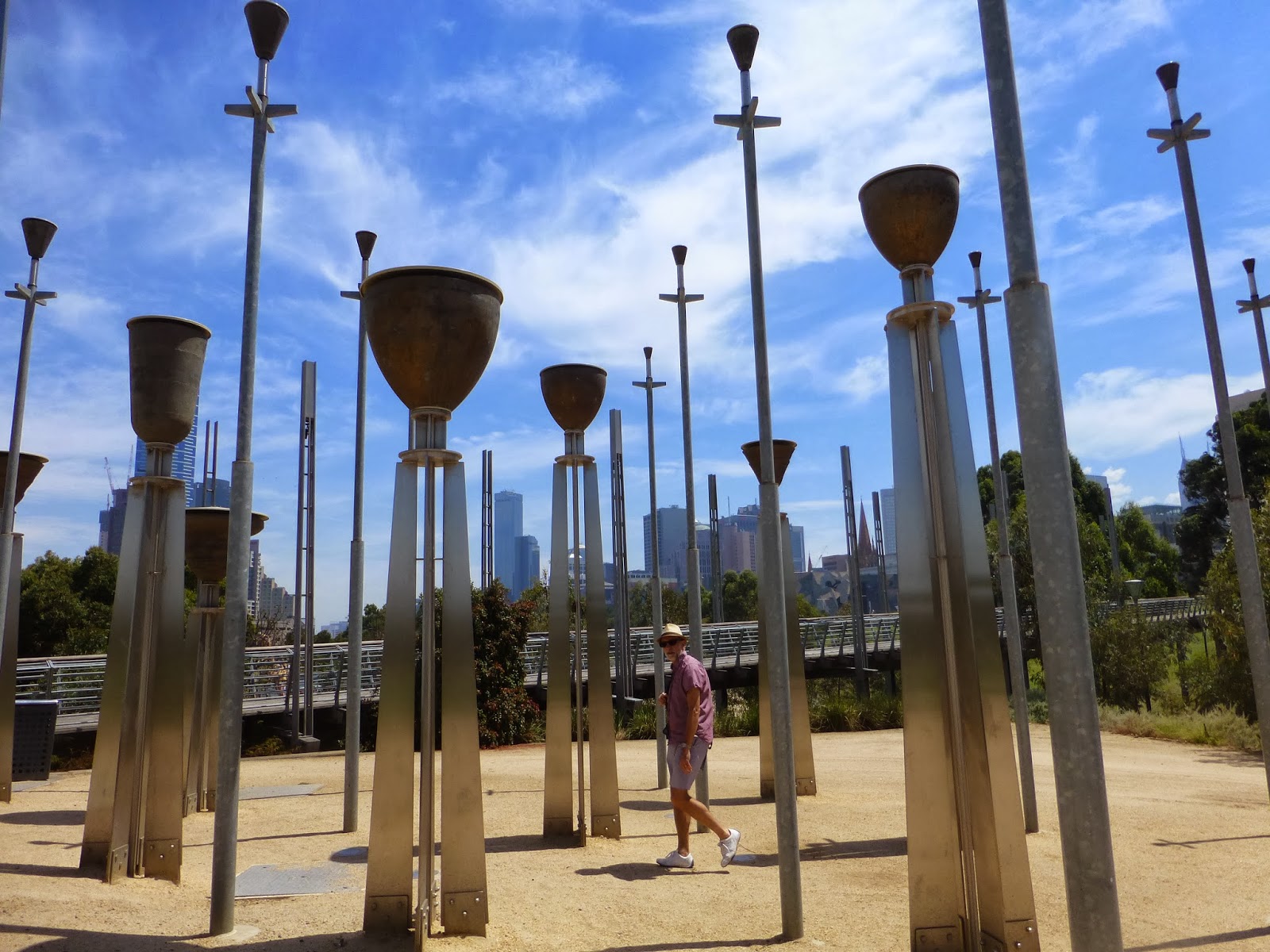 Mark walking between the bells, on the banks of the Yarra, in Melbourne. 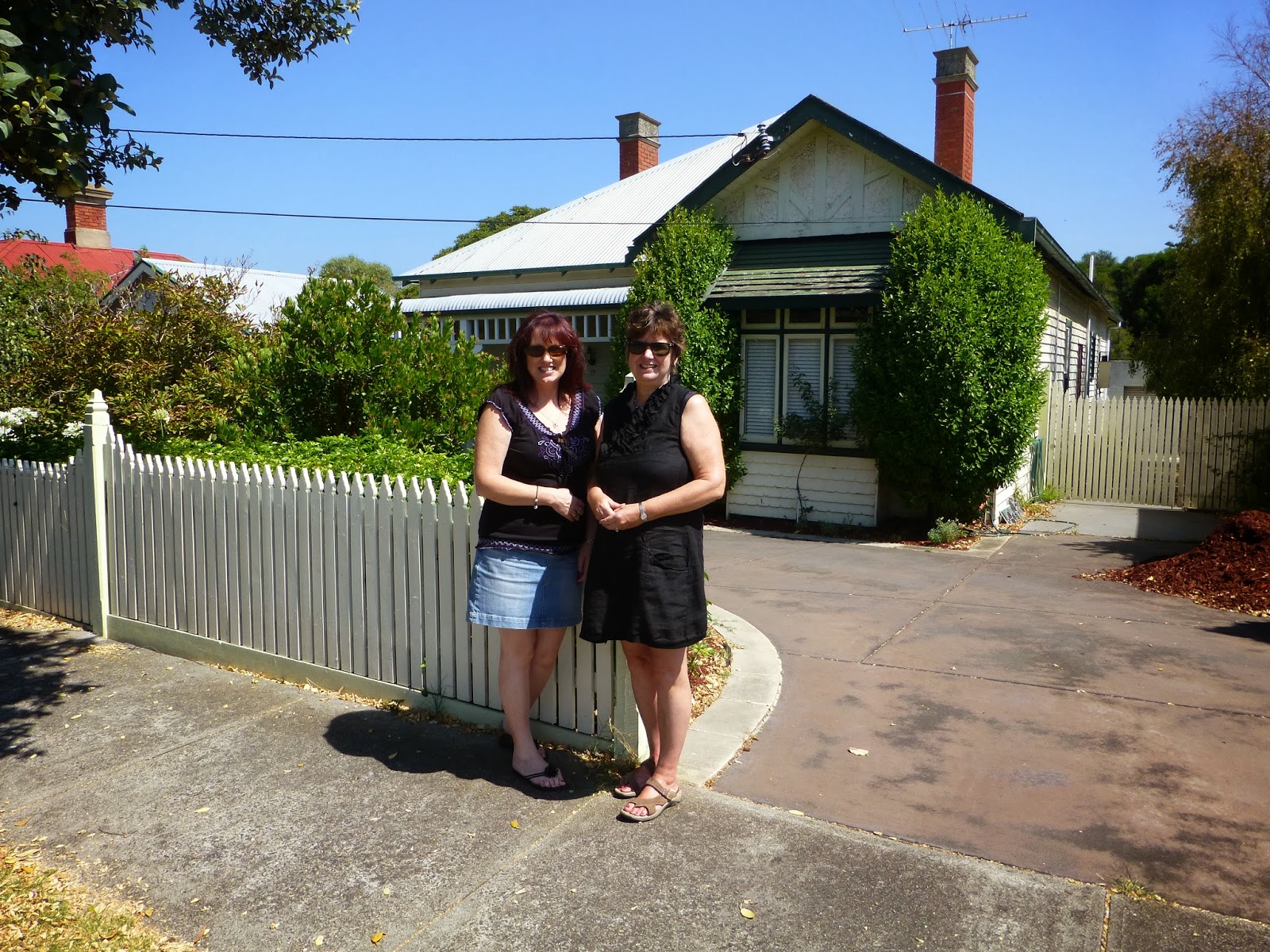 Linda and I, outside the house where she grew up in Mordiallac, just outside Melbourne 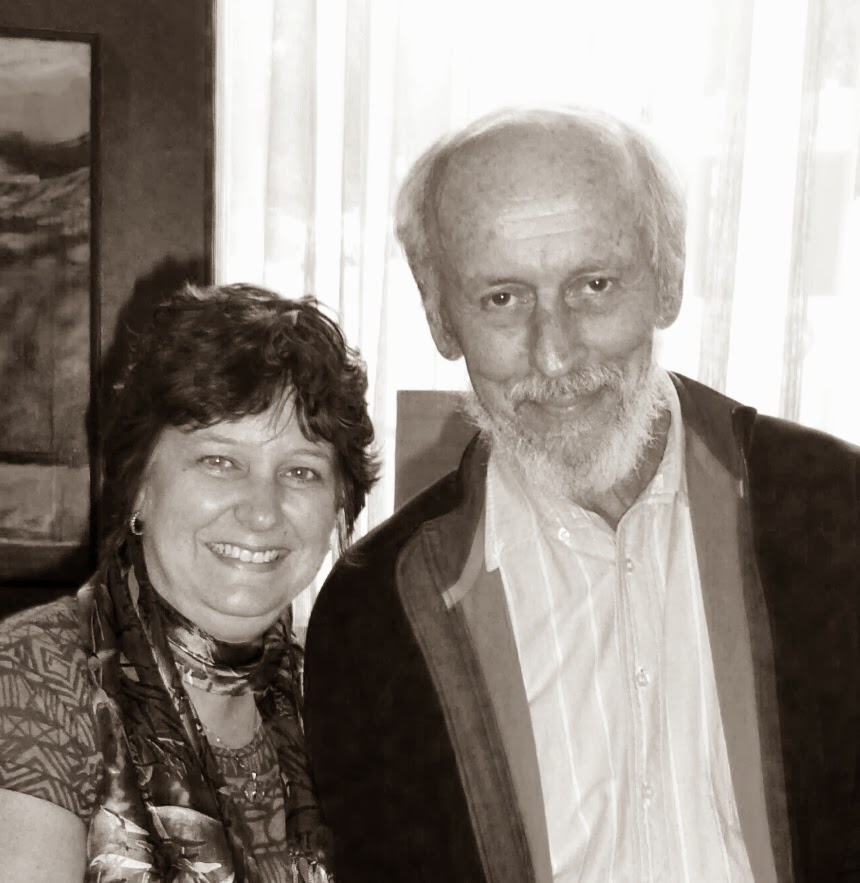 The NZ bit of the trip began with another cousin. I finally met Bill, who is the younger of my grandfather's grandsons, descending from his first ( and only legal ) wife. Bill left Australia many years ago and loves New Zealand with an all consuming passion.  He loves tramping, which I discovered is similar to walking/hiking, but because of the incredible topography in New Zealand tends to include tramping through chest high water, having to be helicoptered from one part of a track to another, and generally exerting oneself more than I would enjoy ! 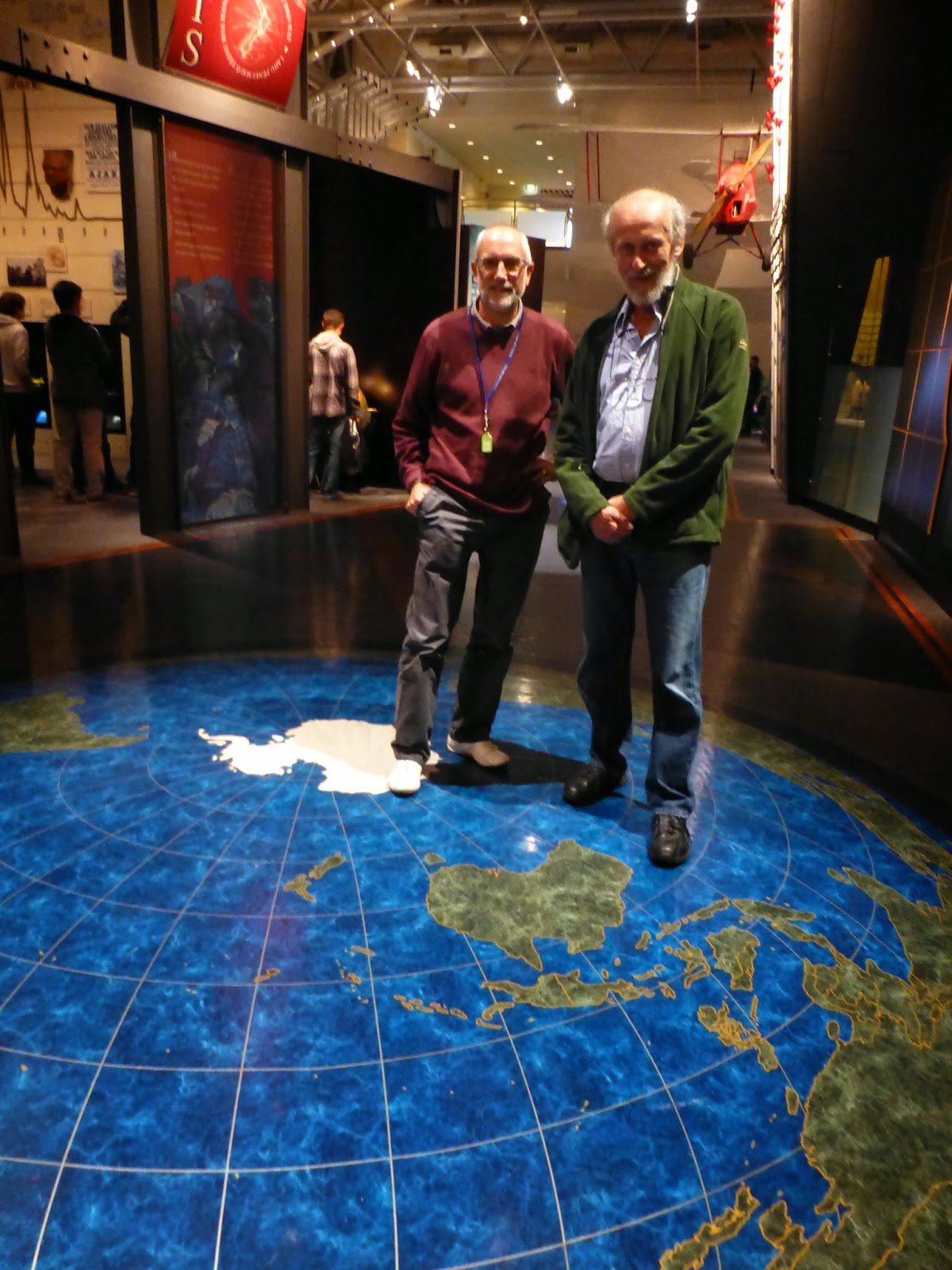 Bill and Mark at Te Papa, with a southern hemisphere emphasised map....not the way we are used to seeing the world....a bit like seeing the southern skies at night, and not recognising anything !

Bill is currently a guide at the superb Te Papa museum in Wellington, and one of the highlights of the trip was the personalised tour he gave us of the museum. It is always good to see a place with the help of eyes that know and love a place. Just as Bill helped us see Te  Papa through his eyes, we were so pleased to have his views on how we could travel around the south island, which was the next phase of our journey. 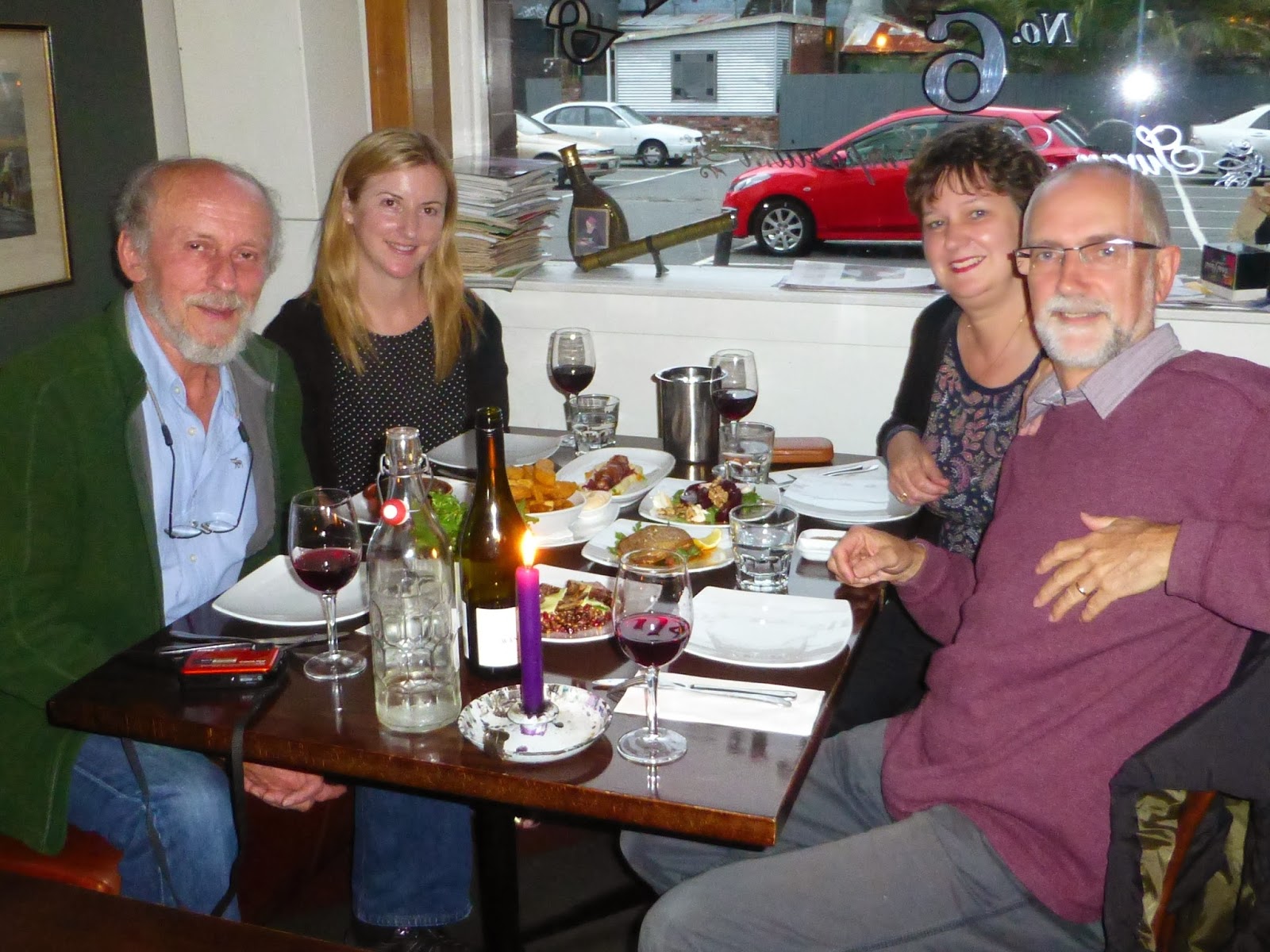 Bill, Claire, Mark and I, at a wonderful restaurant just off Cuba St in Wellington

Bill gave us his old NZ map book, and carefully marked places we might want to stop. We easily decided that touring the south island of New Zealand via places Bill had lived, built houses, found gold, fathered children, climbed mountains, observed wildlife and eaten good food, would be a good idea. So that is what we did. 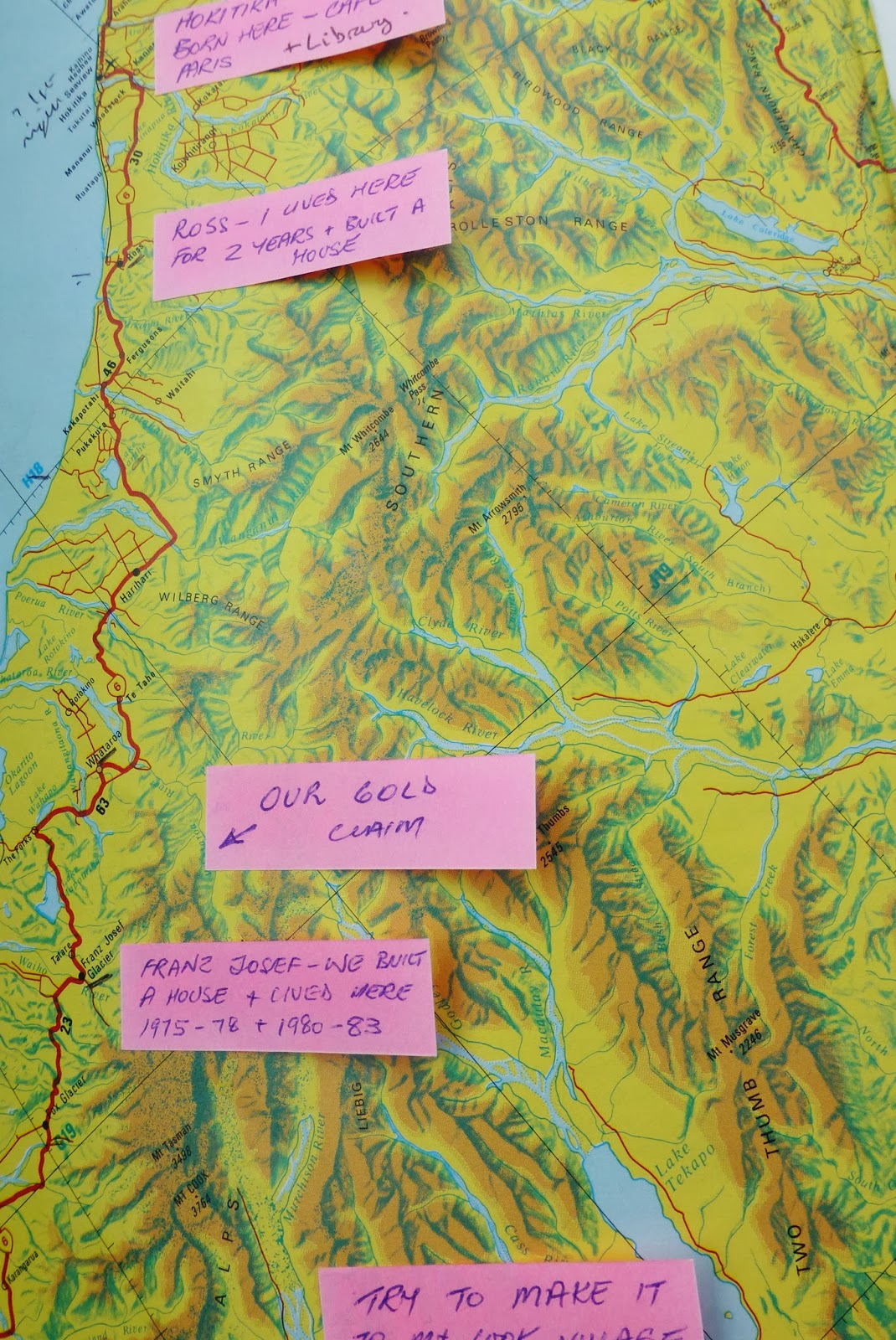 A page from Bill's 1981 map book, that was so well annotated that we never used the sat-nav....Bill's directions were perfect. 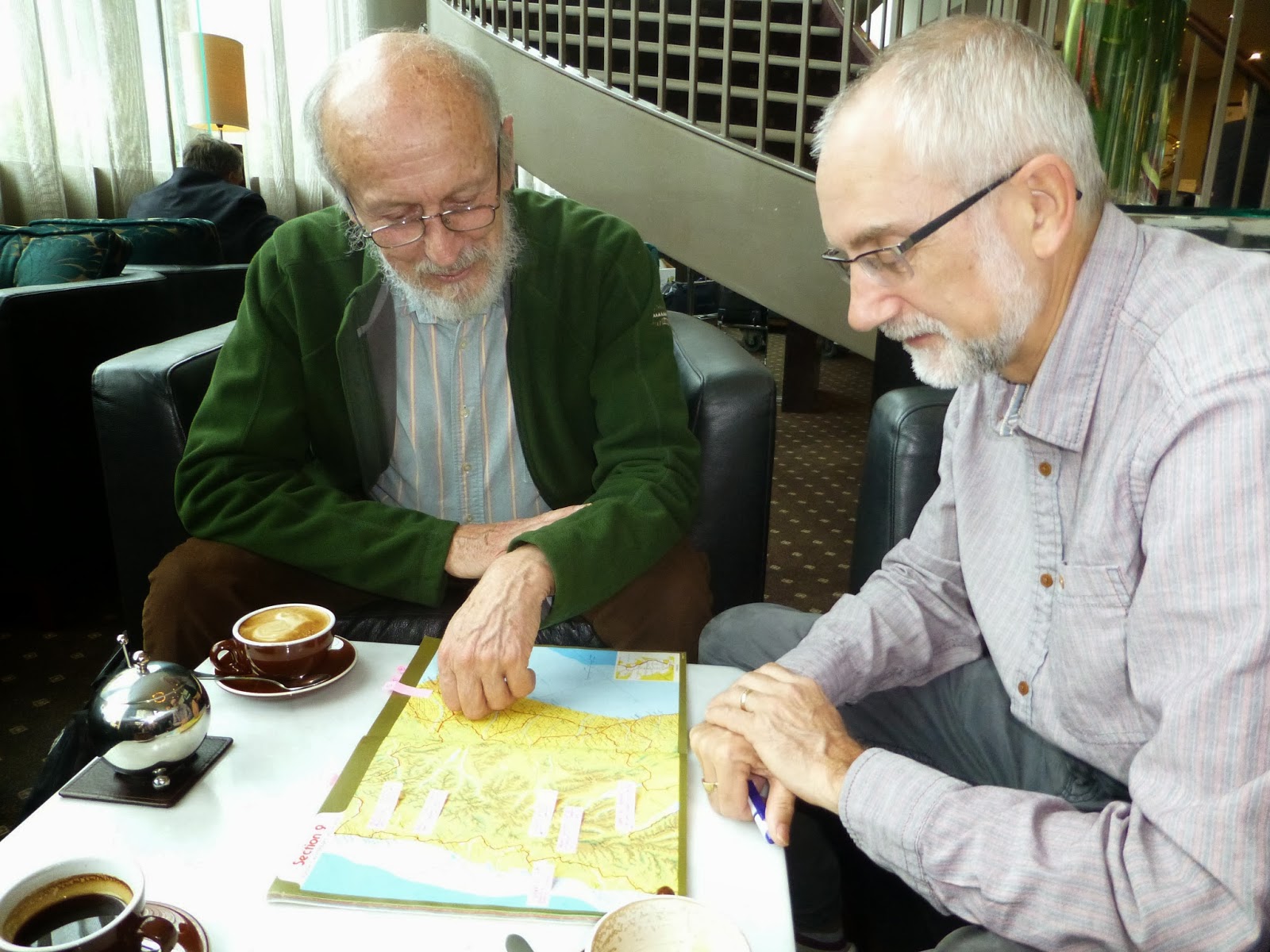 Mark and Bill, planning the route

To choose a favourite spot is impossible. Wellington was wonderful because of Bill, and his beautiful daughter Claire. ( I met up with his other two equally gorgeous daughters when I was in Melbourne ). Mt Cook was spectacular, Franz Josef was stunning ( if very wet and misty !), and the drive into Queenstown took our breath away.

However, the place I want to tell you about here, is Hokitika. It will always hold a very special place in my heart. I loved it.

( This is not one of my photos.....but an image that is used on post cards of Hokitika )

Booker prize winner Eleanor Catton's "The Luminaries" is set in Hokitika, and I had ensured that I had finished reading all 832 pages before I arrived in NZ. It is about the NZ gold rush, and a group of people who live in and around Hokitika and how they become embroiled in a mystery concerning gold, murder, theft, Maoris, colonists,  greenstone carving, ship wrecks, opium, betrayal, political ambitions, vulnerablity, prositution.......you name it, it's in there somewhere! 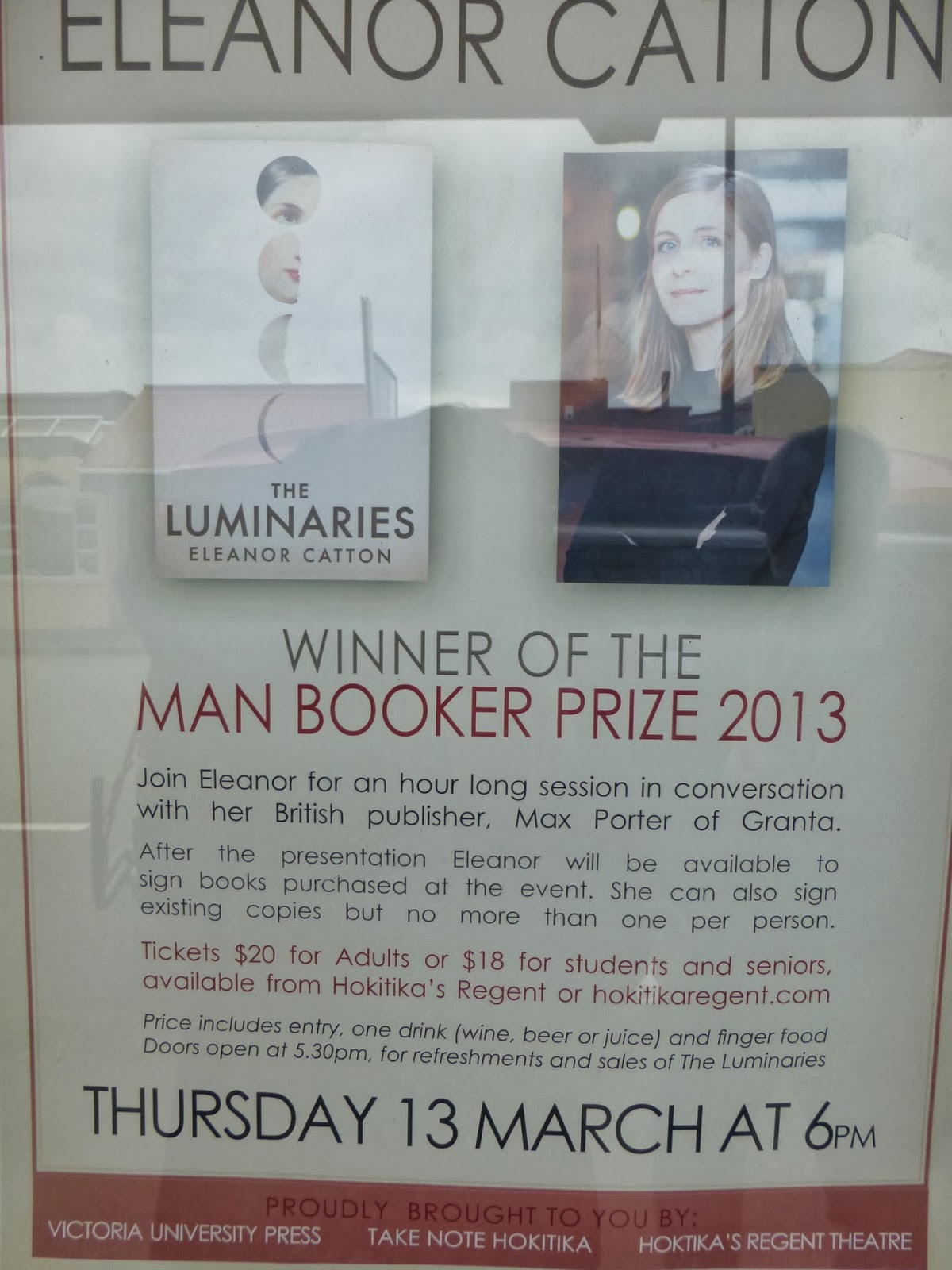 I suspect Hokitika hasn't changed much...except it is smaller now, there are only a handful of hotels/motels/backpacker places to stay, as opposed to the hundreds of hotels, bars and doss houses that existed in the 1860s. Some of the original buildings have been restored, and it is possible to find many of the places described in Catton's stunning novel. I was devastated to discover that she is going to Hokitika on 13 March to talk about the book at the Hokitika picture house. How I would love to be there then. 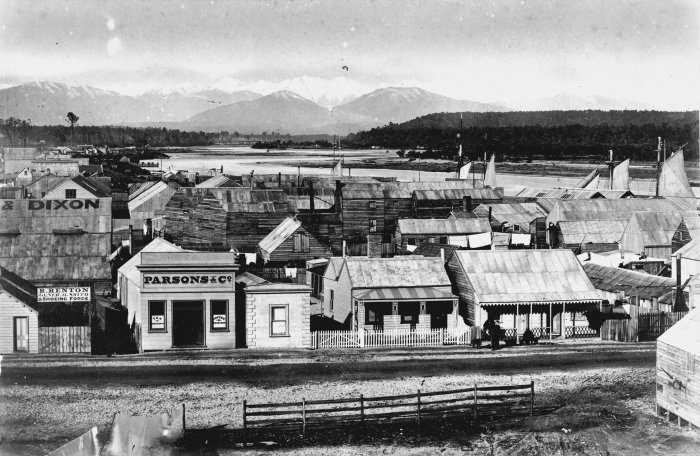 Again, not one of mine....but an image that is used in the front and back pages of "The Luminaries" 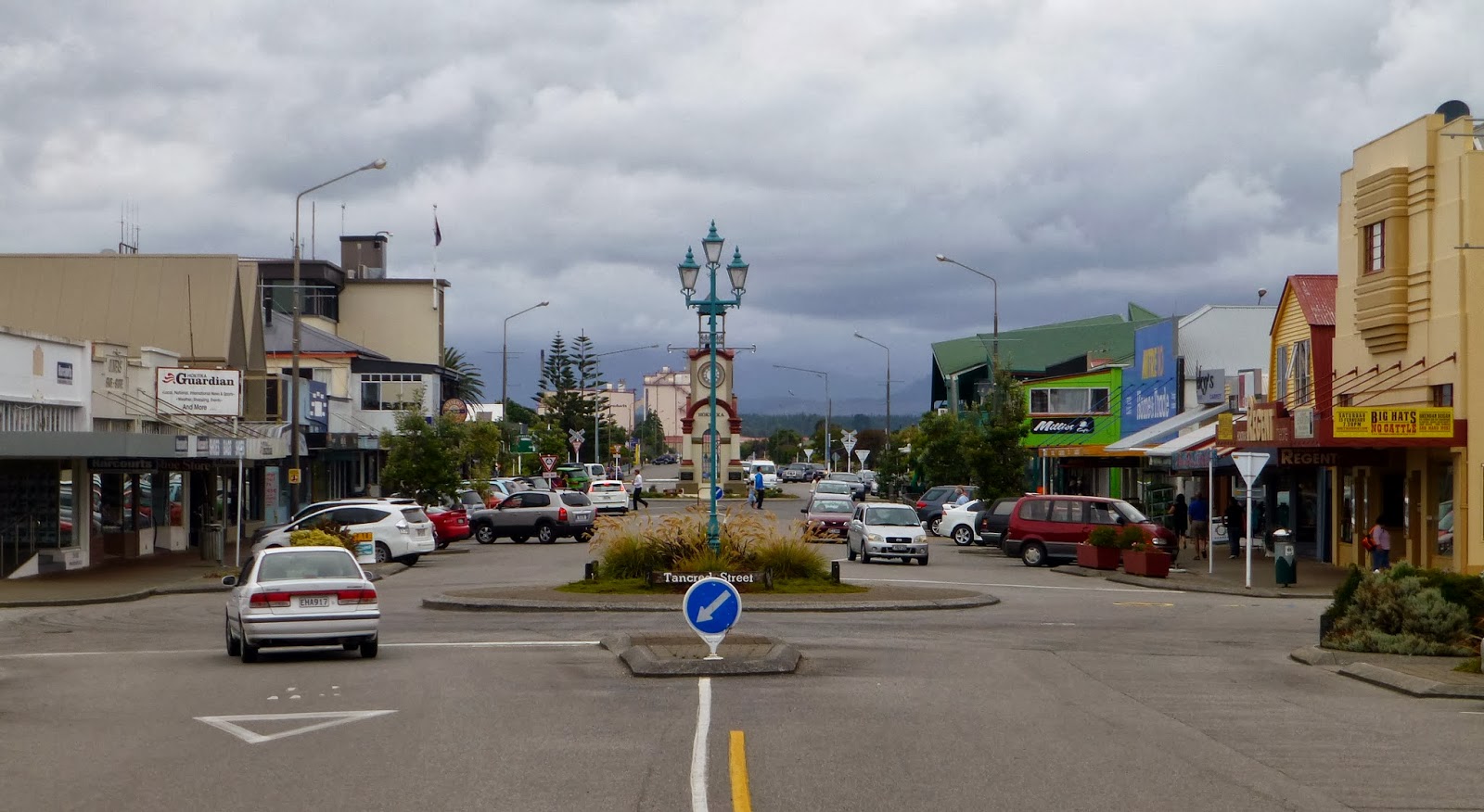 We walked around the streets, me trying to explain bits of the novel to Mark as we went. It wasn't too hard to picture it in the 1860s. The quay side was particularly interesting. It had been a very difficult port to enter due to the prevailing winds on the west coast, and the sand bar at the entrance to the harbour. Many ships were lost as they tried to arrive at Hokitika. The quay side has now been turned into a lovely walkway.....but the spirit of those times was definitely in the air. 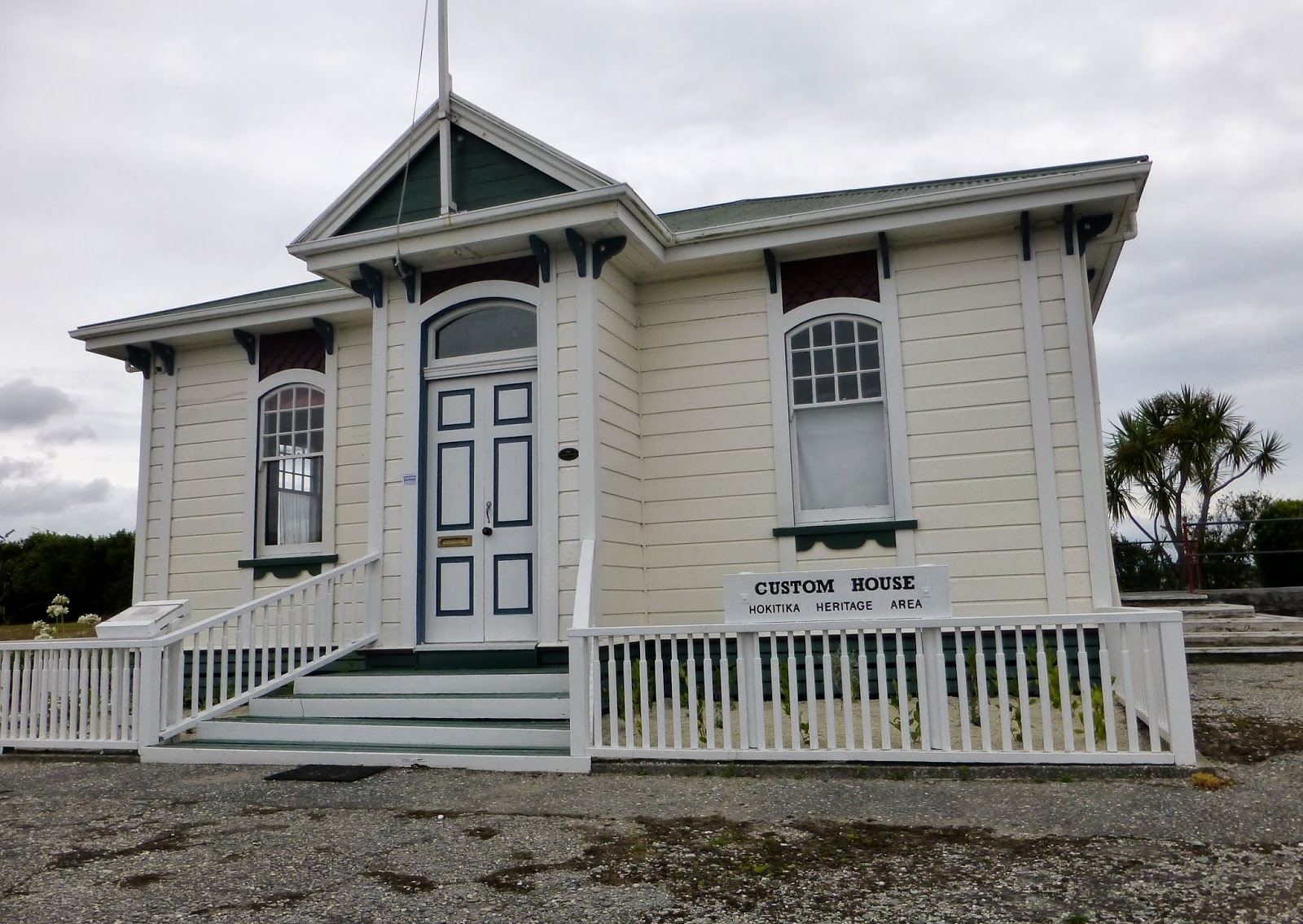 The reconstructed and preserved Custom House, featured in the novel. 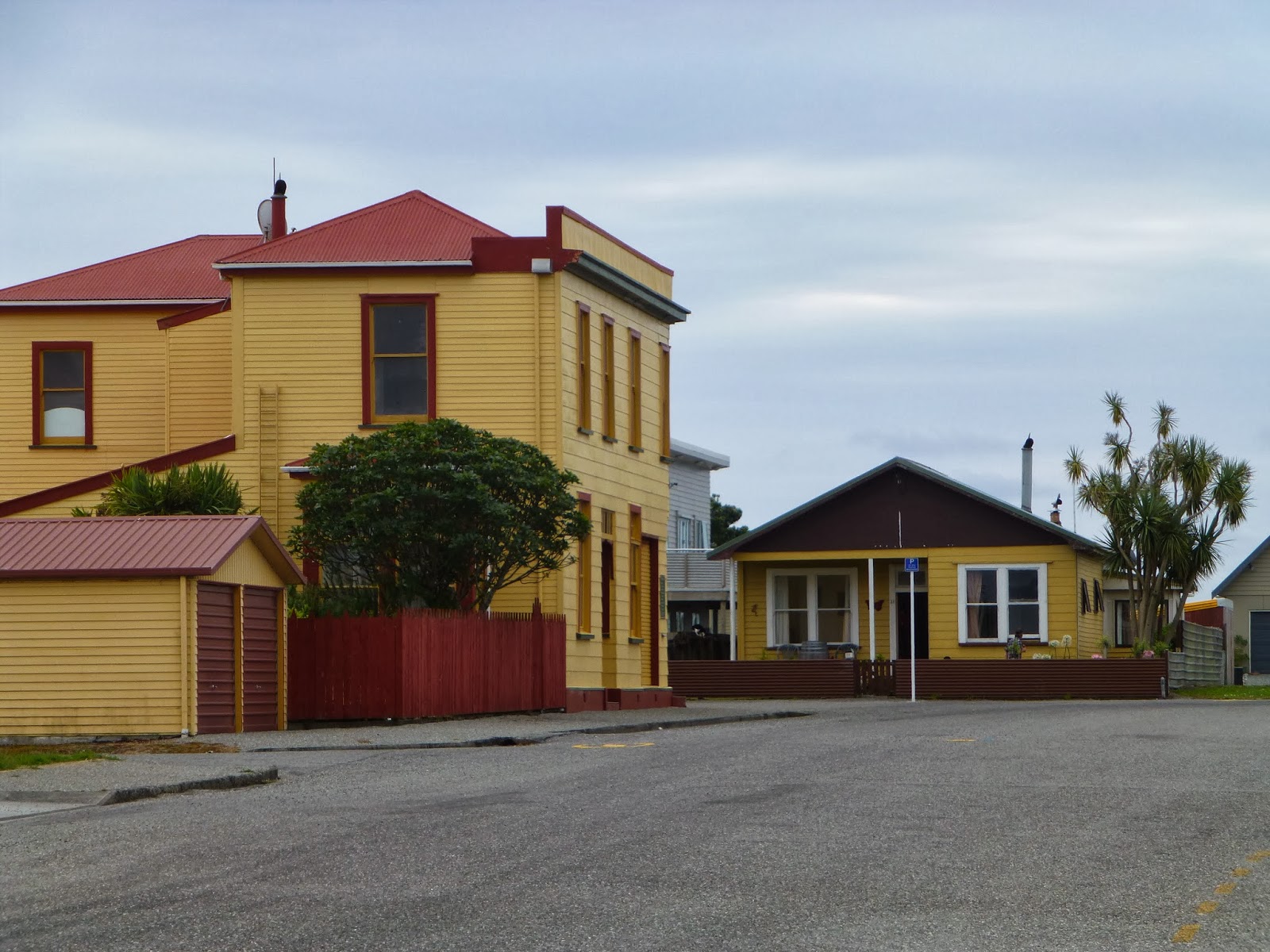 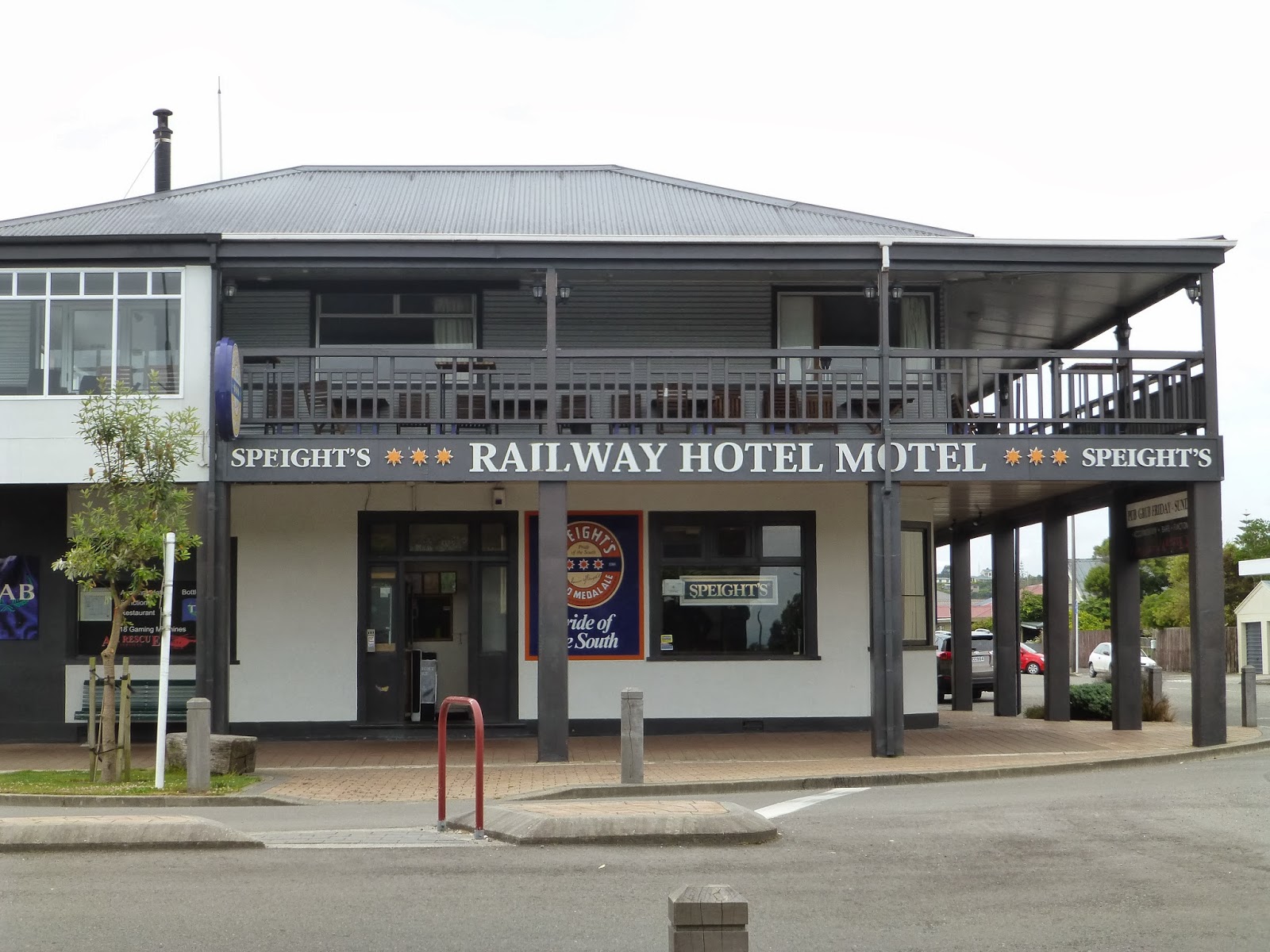 This is the motel we stayed in.....it was very very cheap, and very very basic.....but meant we felt we could treat ourselves to something a bit more luxurious later in the trip....and somehow, basic seemed right in Hokitika !

I could go on and on, and I realise this post is already far too long....but I have to just mention the beach, which was where we spent the longest time. Actually, I wont tell you about it, I'll just let the photos show you. 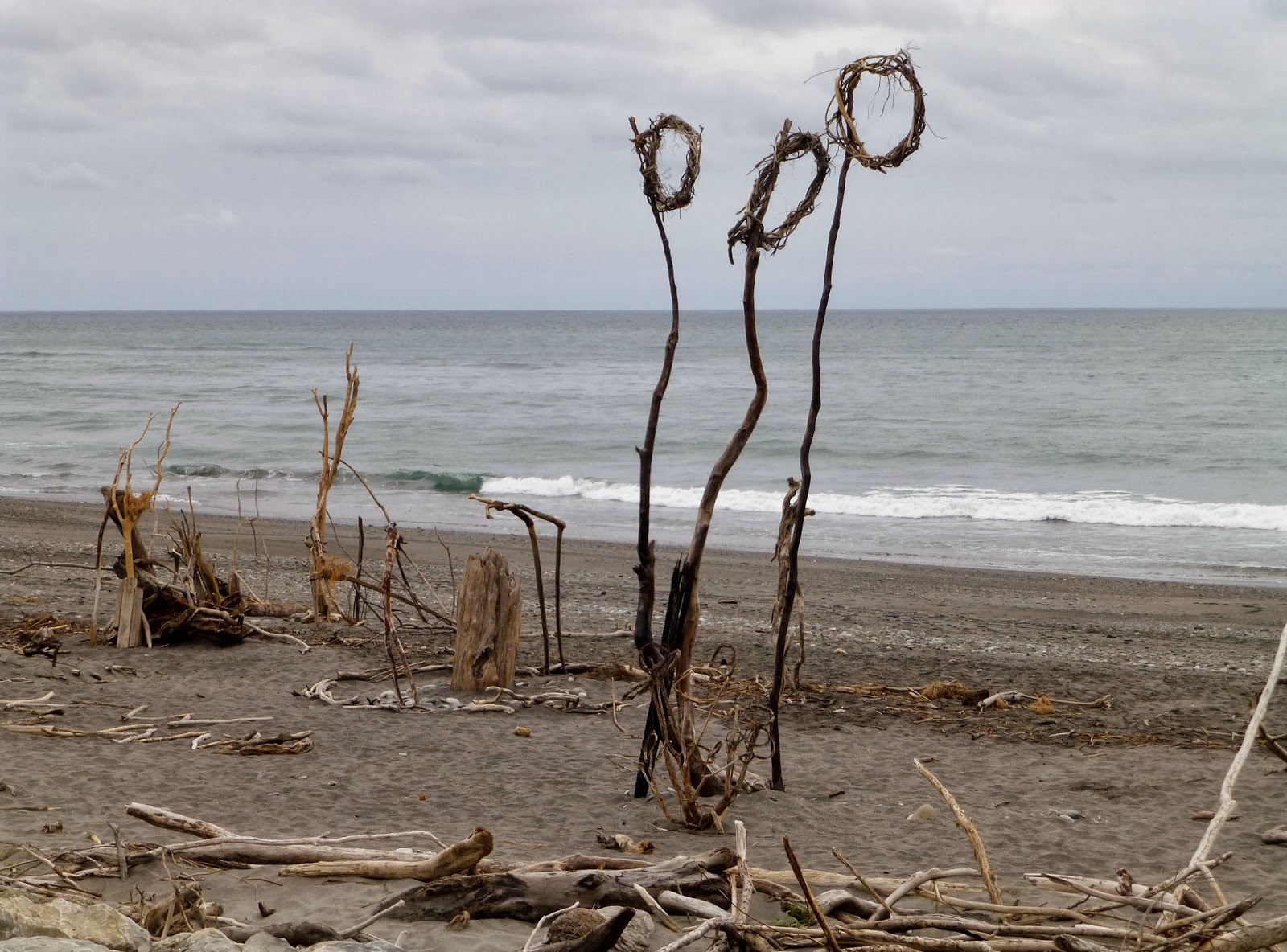 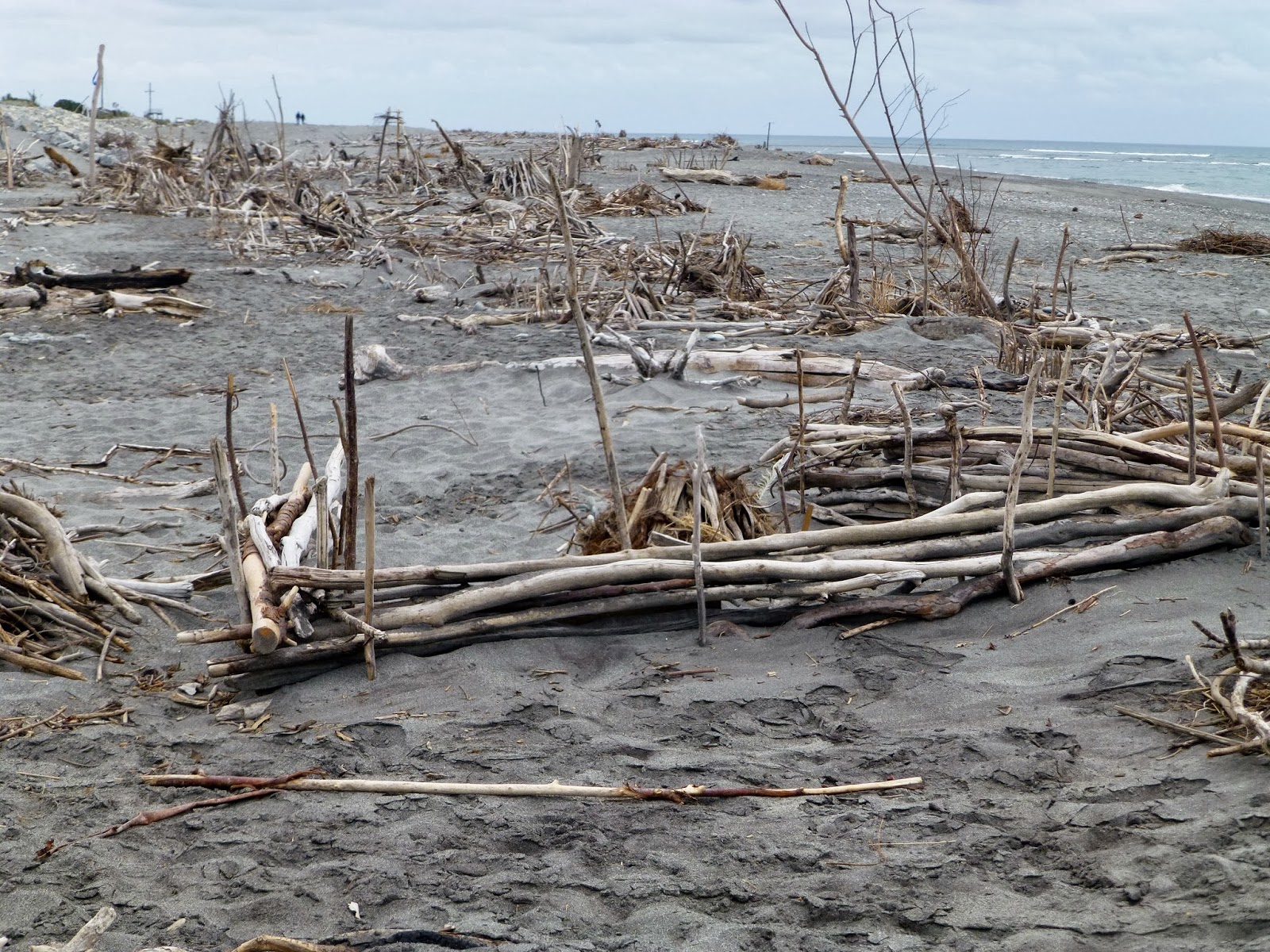 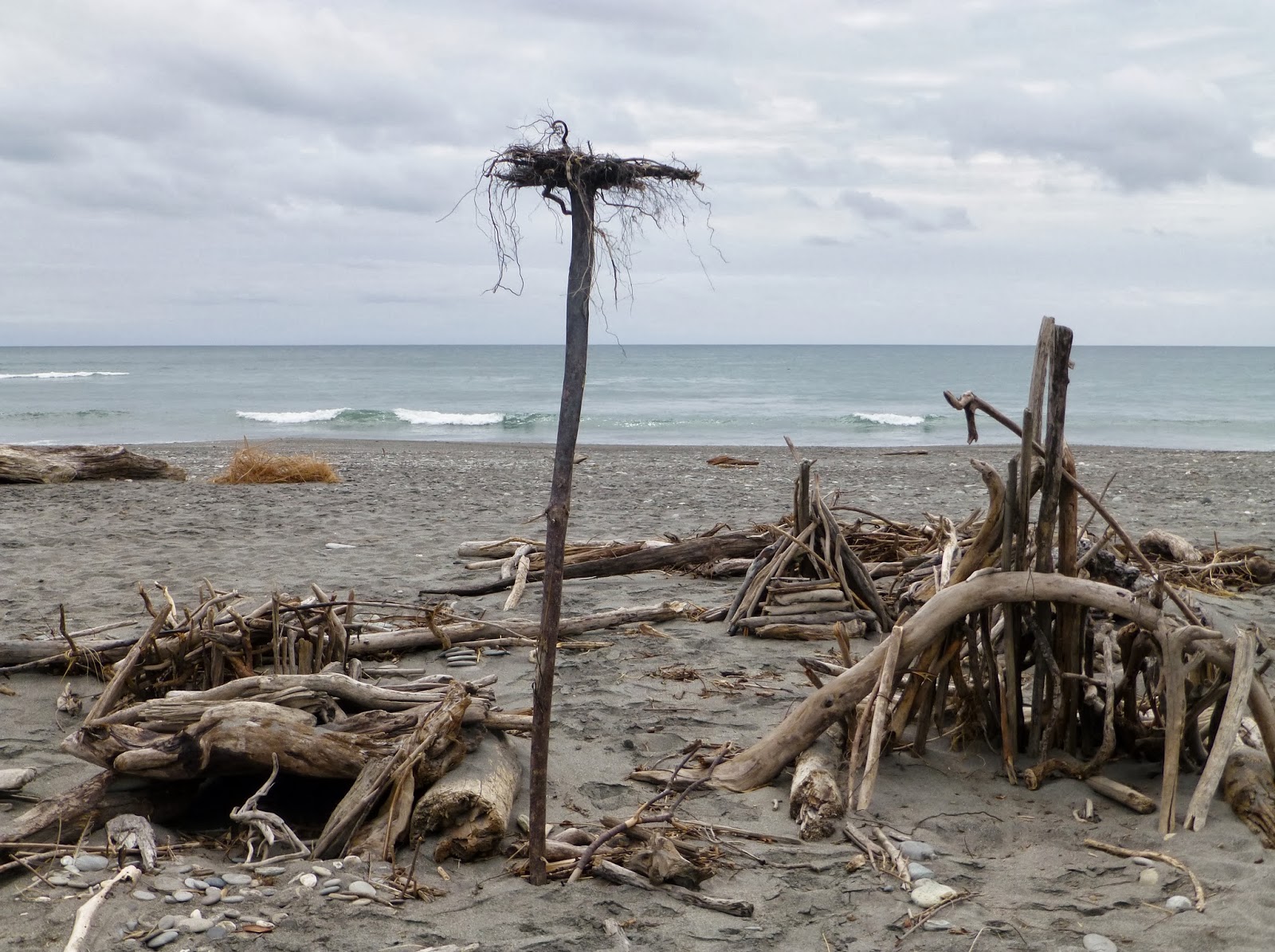 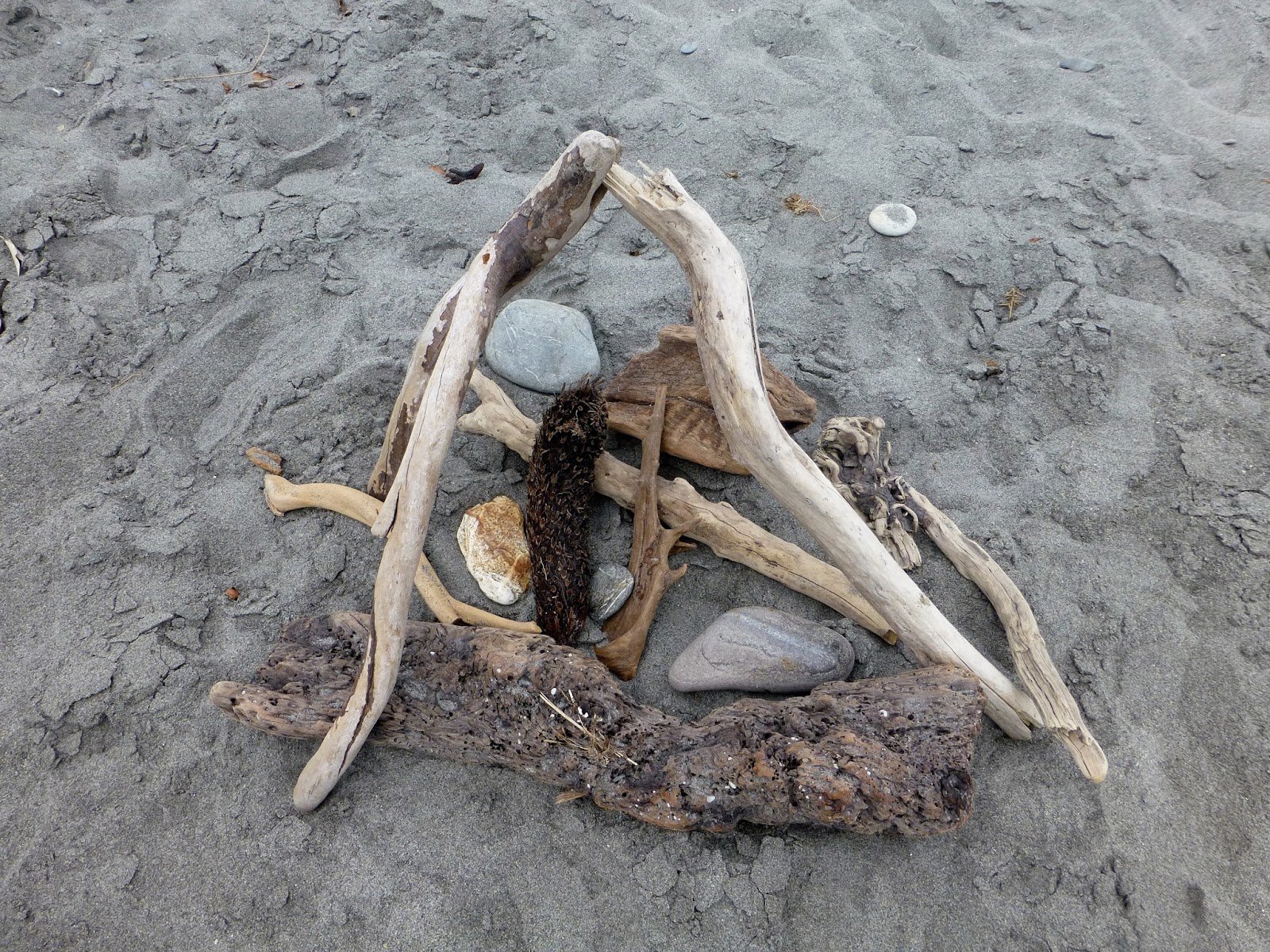 This is our small addition to the art gallery that is the beach at Hokitika.

I don't know if this link will work....but it might show you the annual competition held here .......and some beautiful sculptures.