Florence Maud Mary was born in 1859,  the 7th child of 10 born to master tailor Edward Murch and his wife Catherine Vevyan. The family lived in Devonport, one of the 3 towns that were eventually amalgamated to become Plymouth. (Devonport, Stonehouse and Plymouth ). They were reasonably affluent, Edward employed a number of workers and the family had a servant at one stage, when they lived on Devonport’s thriving main street, Fore Street. 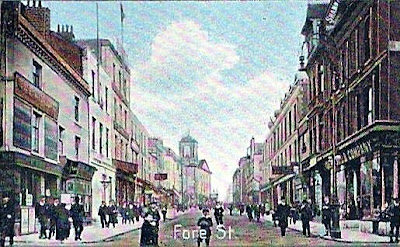 The dockyards were central to the lives of everyone in the area. Edward’s tailoring would certainly have included naval uniforms. 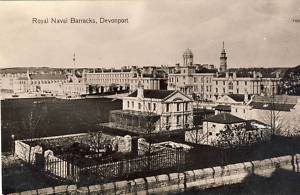 Florence’s brothers were either employed in the navy or they worked at the docks, and she married a Royal Navy Artificer.
He was called William Whelen, and was the Liverpool born son of            Irish  immigrants


Although the Murch family were Methodist, Florence married William in the Royal Navy’s Roman Catholic chapel near Mount Wise in Devonport. The couple’s children were baptised as Roman Catholics. 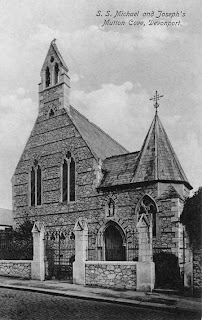 Florence’s story is short and sad. Following her marriage she had 6 children in 10 years. Her husband was rarely at home, but she followed him back to Liverpool where he worked at the Bootle docks in the mid 1880s. Florence returned to Devonport sometime between 1891 and her death in 1898, when she was 39.

Five of her 6 children were sent to Catholic sailor’s charitable organisations. It seems her husband was unable to look after the children, and anyway, he remarried 2 years later. Florence’s own mother died the same year, so there was no possibility of her taking care of the young family. Florence’s eldest son, my grandfather, was 18 and deemed old enough to look after himself. The 5 youngest children emerged from their various orphanages, 2 of the girls marrying into naval families, one daughter seems to have vanished and I am unable to trace her at all. At least one of the 2 other sons emigrated to Australia and married an Australian woman with the wonderful name of Vera May Mulshine.
My bigamist grandfather went on to marry 3 women, leaving wife number one after his experiences in the trenches of the 1st world war. His complicated life led to 3 brothers not knowing of each other’s existence.


However, the story of my grandfather, and his siblings, is for another time.
I have wanted to know more about Florence ever since I have known of her existence. This last week I have spent 5 days in Devonport, looking for hints about her life. I did not expect to find concrete evidence of her, but I wanted to walk the streets that she had done, as a child, and as a young woman.
﻿

What have I found ?
I have found a town that existed of appalling slums in the late 19th century, where cholera and small pox claimed the lives of many. I have found a very small town where there used to be 200 pubs, where alcoholism was rife, and prostitution even “rifer” !  One of Florence’s brothers was born again, into the Salvation Army, and I can only presume that this was connected to the Temperance movement that grew out of the horrors that alcohol abuse brought to the community.
I found the house Florence lived in soon after she gave birth to her first son ( my grandfather)...she was there with a cousin, and the baby. Her husband was at sea.
I found the street she grew up on, although WW2 bombs obliterated any evidence of the houses she would have known.
I found the house her parents lived in 8 years before she was born. I walked along the streets that she would have known.
I toured the dockyards where her brothers and her husband and her sisters’ husbands worked. I saw the few Victorian pubs that remain, and I saw the various, and variable attempts at regeneration that have taken place in Devonport over the years. I also found a housing development that has replaced the Roman Catholic chapel where she married William Whelen.
The Church has gone, but the view from where the church used to be, wont have changed...so I spent some time sitting there, wondering what that young bride thought about back in 1879, when she must have looked out over the River Tamar, and the area around Mount Wise.
I found the street that she lived on when she died. The houses were all gone, small back to back slums, replaced by what look little better....tiny, crowded, terraced “affordable” housing. All that remains is the wall, dividing the road.....enticingly and hopefully called Prospect Row, from the dockyards behind it. 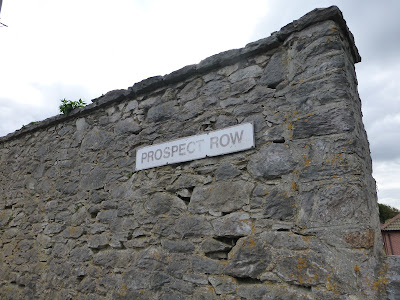 I didn’t find her grave. I suspected that there would have been no headstone, so I was not surprised. Her husband, so absent during her life, did not register her death, that was left to my 18 year old grandfather. So....no trace of Florence remains, but I do feel that I have walked in her shoes for a few hours.