As I passed our local Tridome store ( a French DIY/ garden centre chain) I glimpsed the red and yellow candy striped tents of the circus that has come to town. The glamorous looking big top, and several matching colourful tents were pitched at the end of the car-park, next to a busy roundabout.

I visited the Milwaukee Circus parade many years ago, and loved the beautiful old circus wagons with their gaudy colours, so, drawn to the vibrant colours and painted wagons around the big top, I stopped to have a closer look. 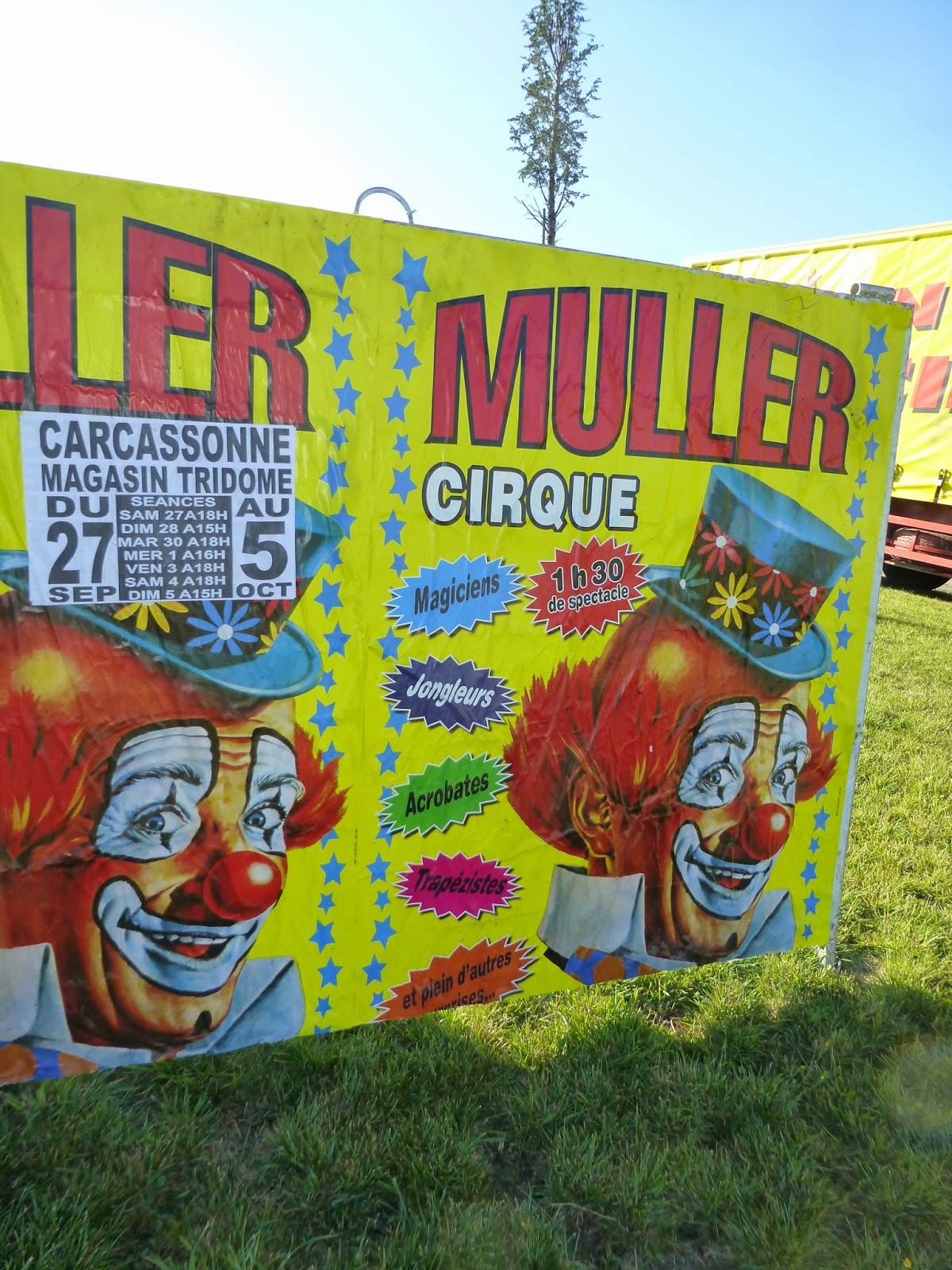 From the roundabout I could see posters advertising jugglers, acrobats, clowns, trapeze artists….then I saw something a little surprising. One of the wagons seemed to be advertising a hippopotamus. Surely I was mistaken. How could this be ? 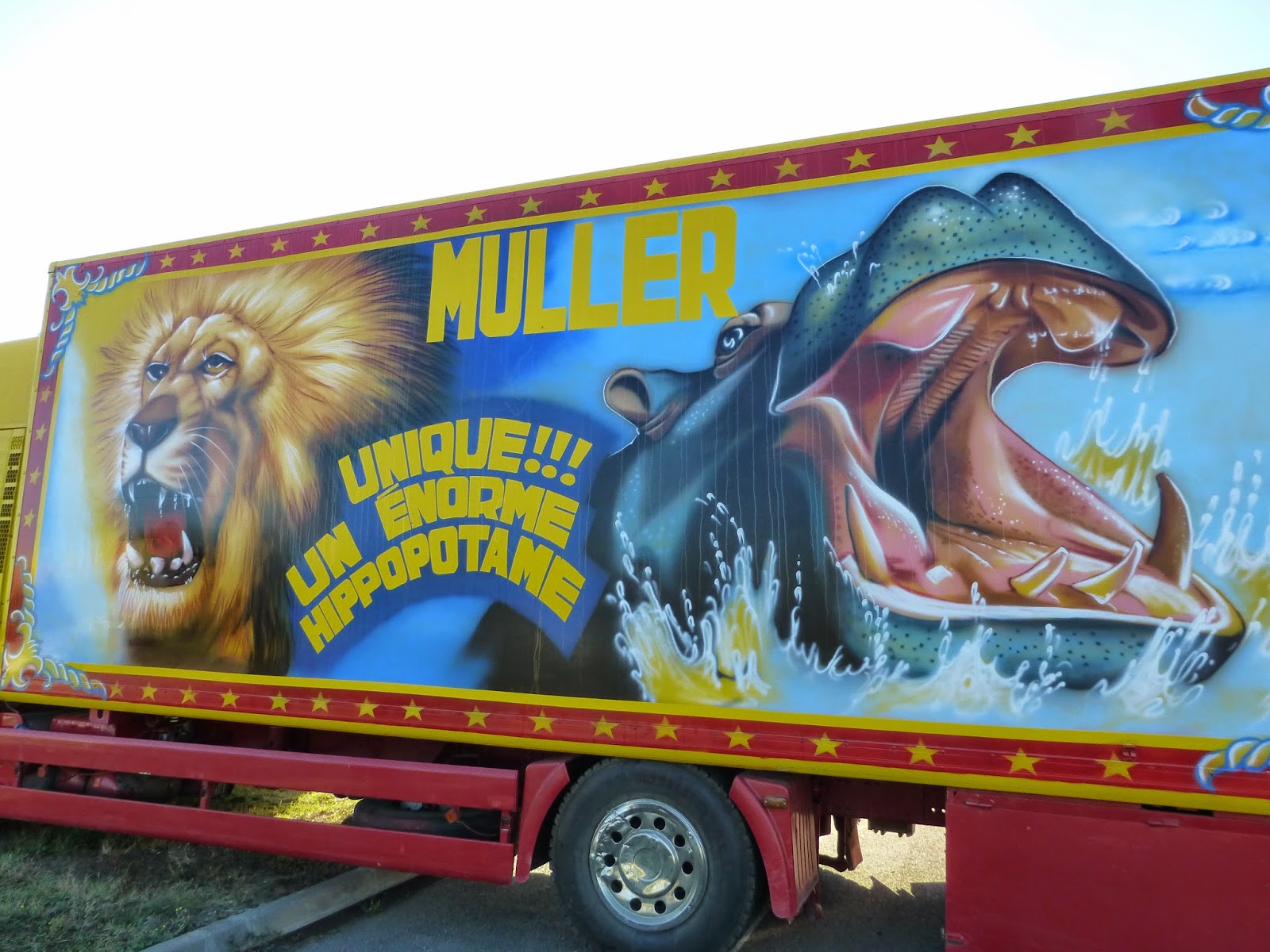 Last year in Caunes, I had stumbled upon a camel and a llama seeming to graze on a roadside green verge . They had been part of the small circus visiting the town. I was surprised that there were still travelling circuses, with animals, but was told by locals that this was still common in France.

However….. a hippo…… Further investigation made everything clear. 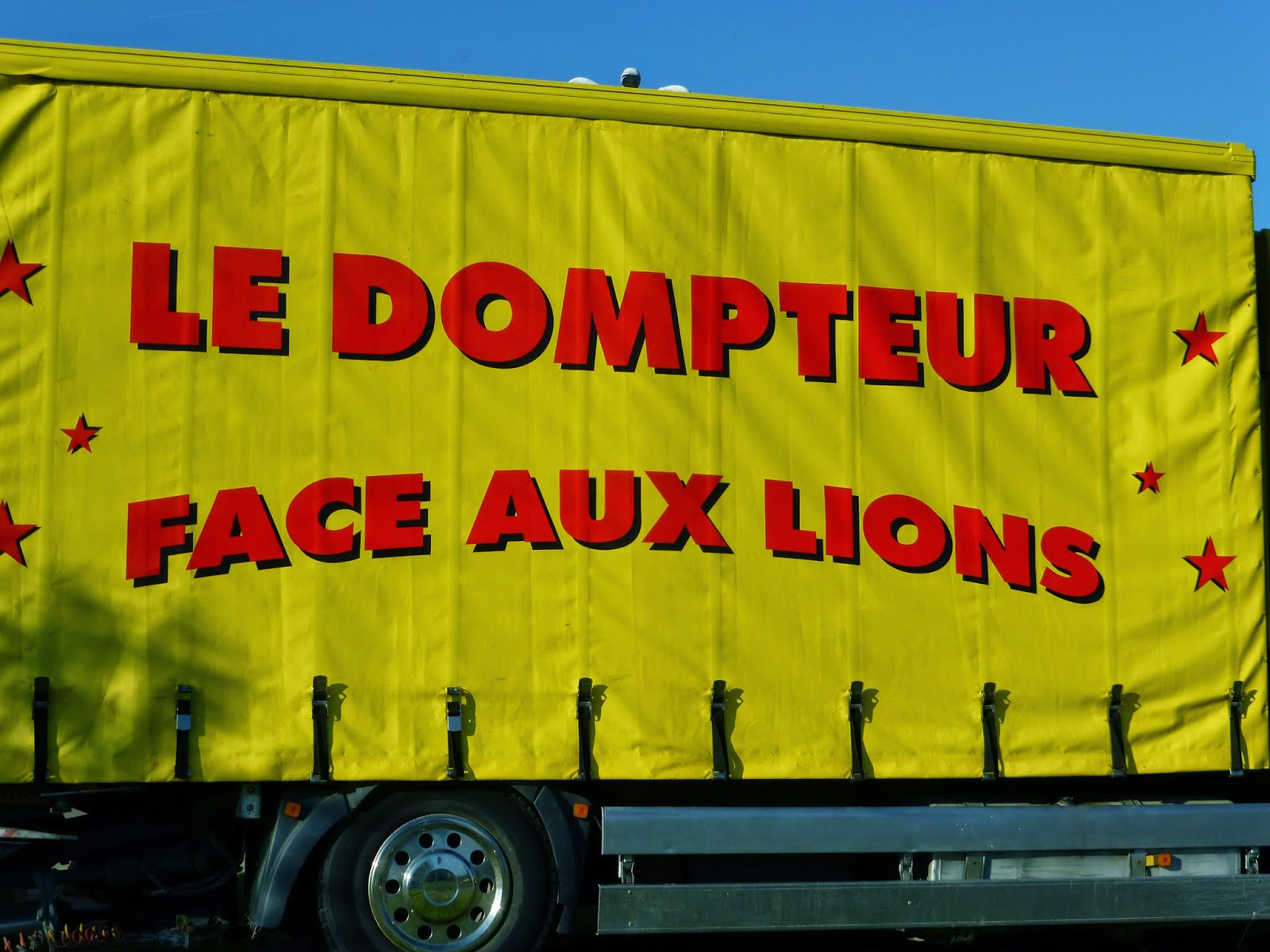 The travelling circus would be in Carcassonne for a few days, and whilst not advertising itself as such, on its posters, involved many, many wild animals. 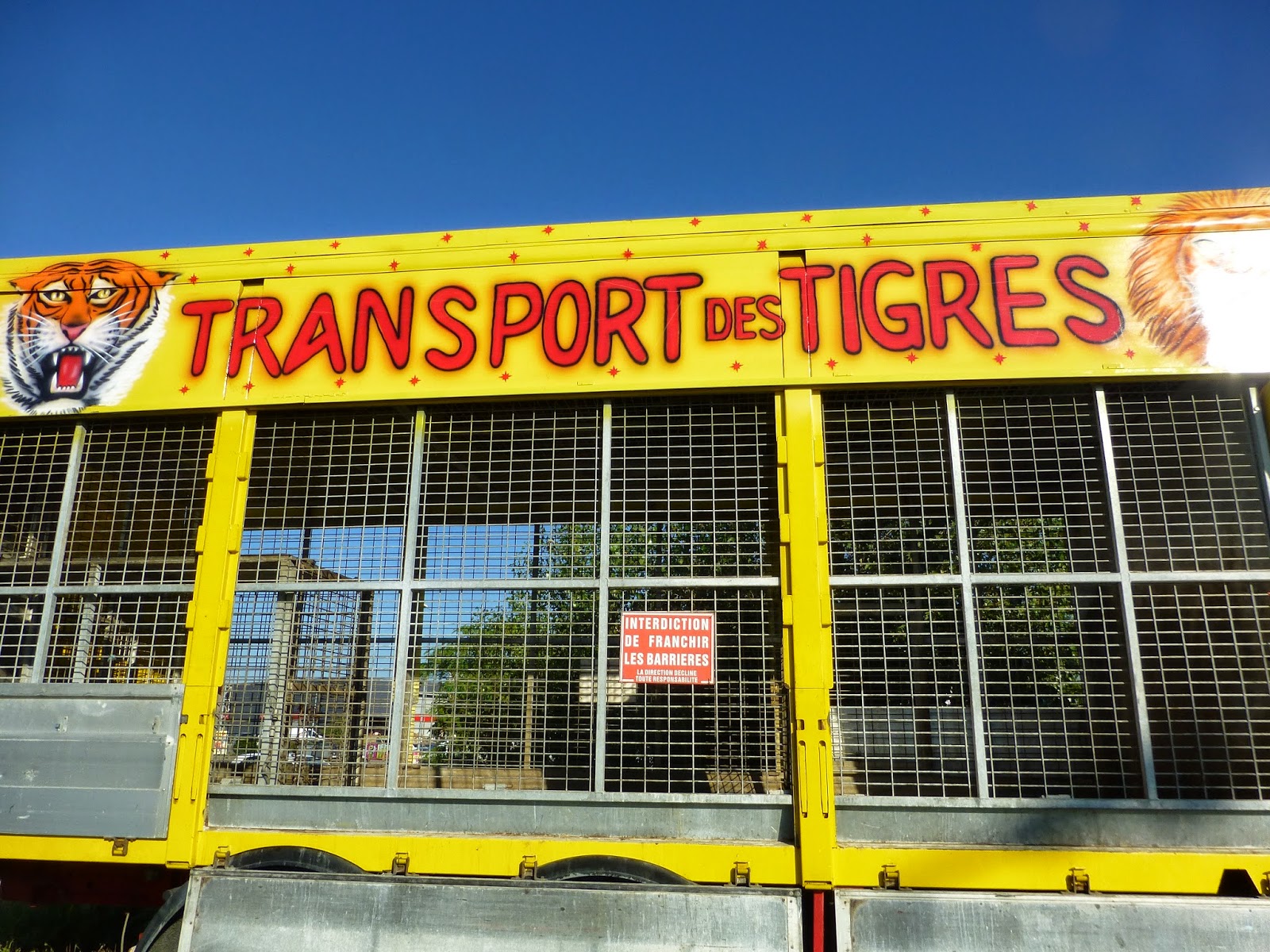 I passed close to the tiger’s wagon. ( I would estimate it measured 12 x 2 metres) As I approached, a man appeared and through a range of cages, positioned next to the wagon, opened a door, and 4 stunningly beautiful tigers emerged. 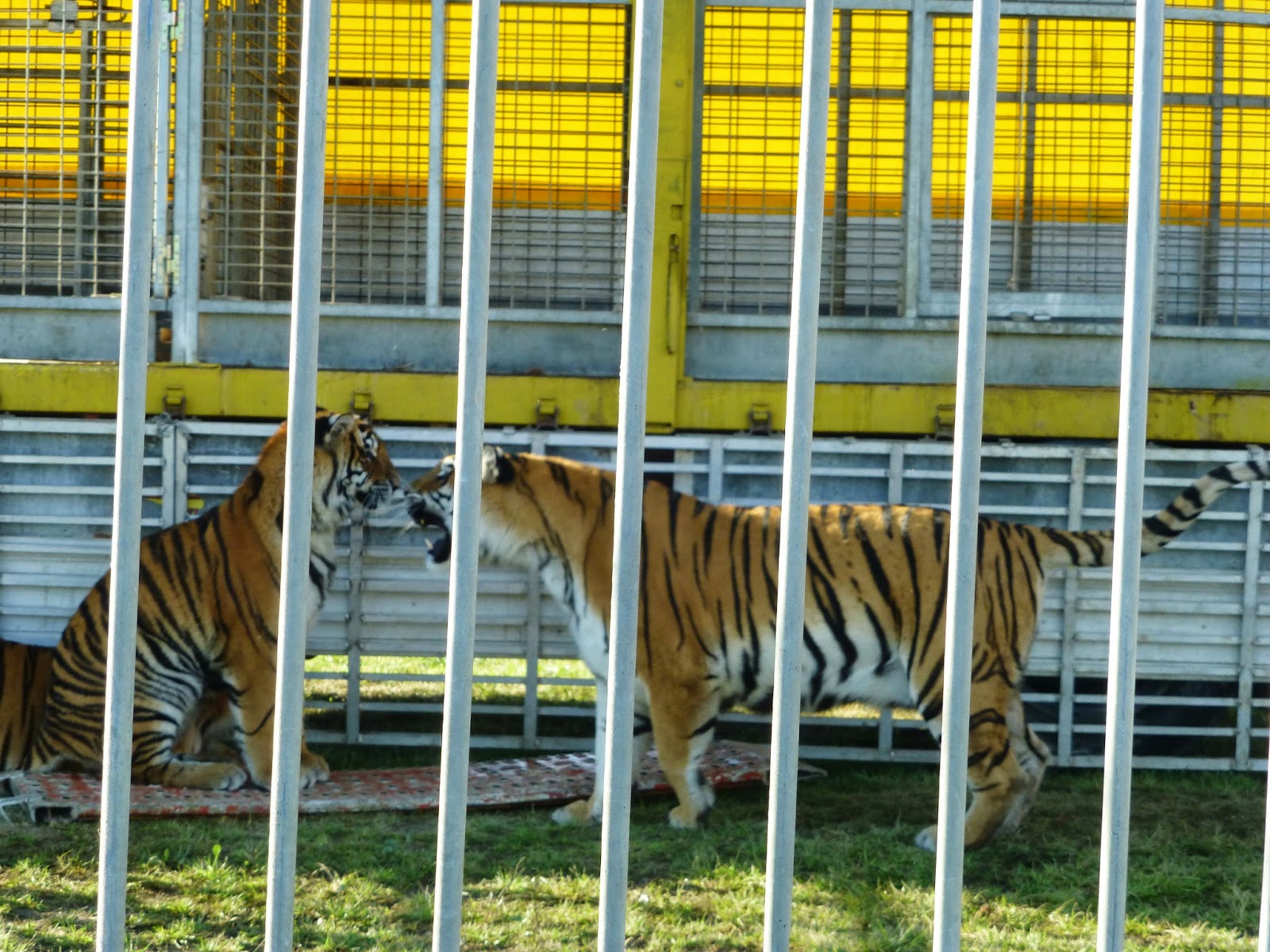 I told the man they were magnificent. He replied, “Merci.”……as if he thought I was congratulating him of having such fine beasts. J’etais epousteflant !  ( I was flabbergasted ! ) 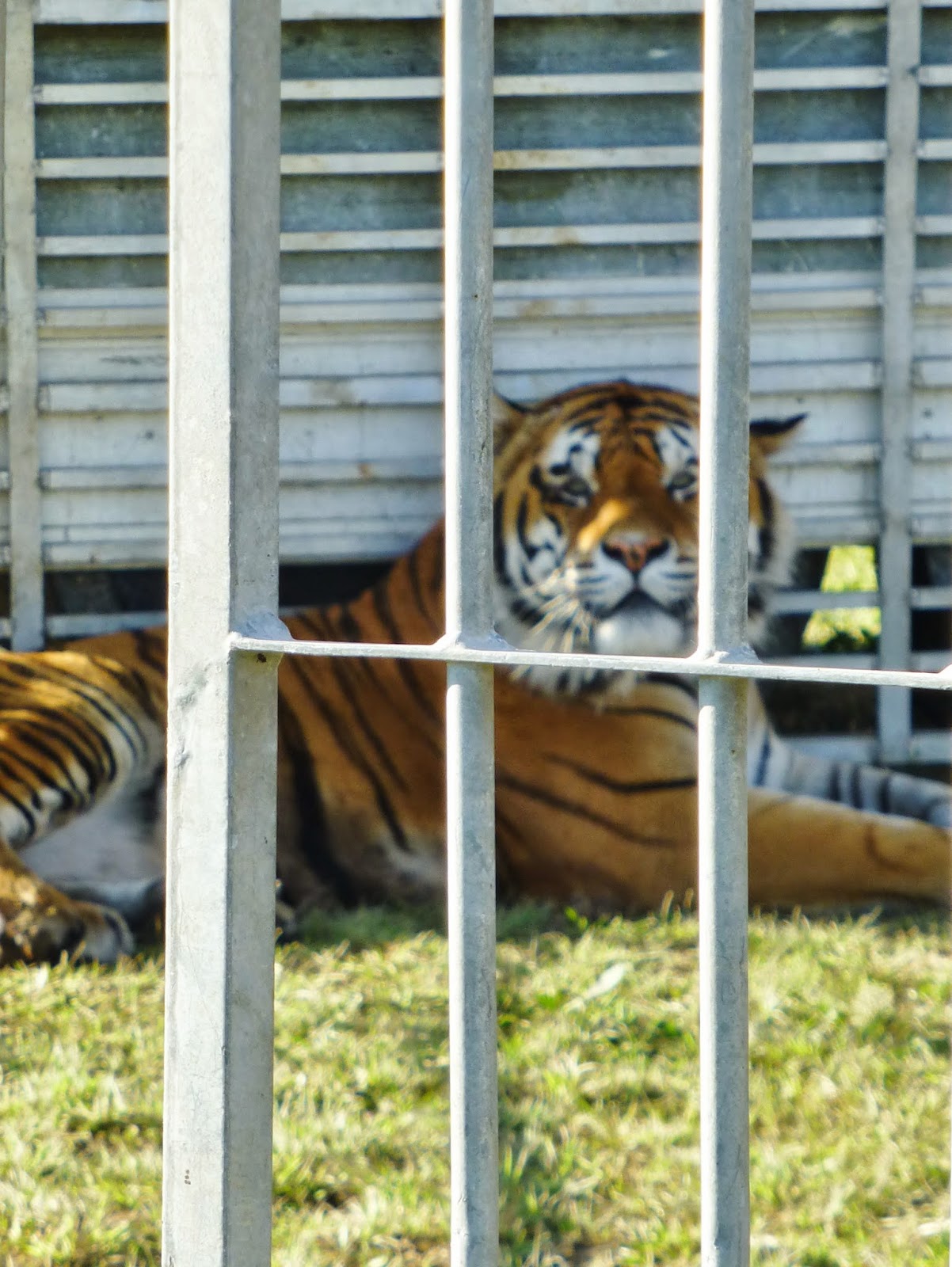 He was happy to let me stay and watch the tigers. He did not object when I took photos. 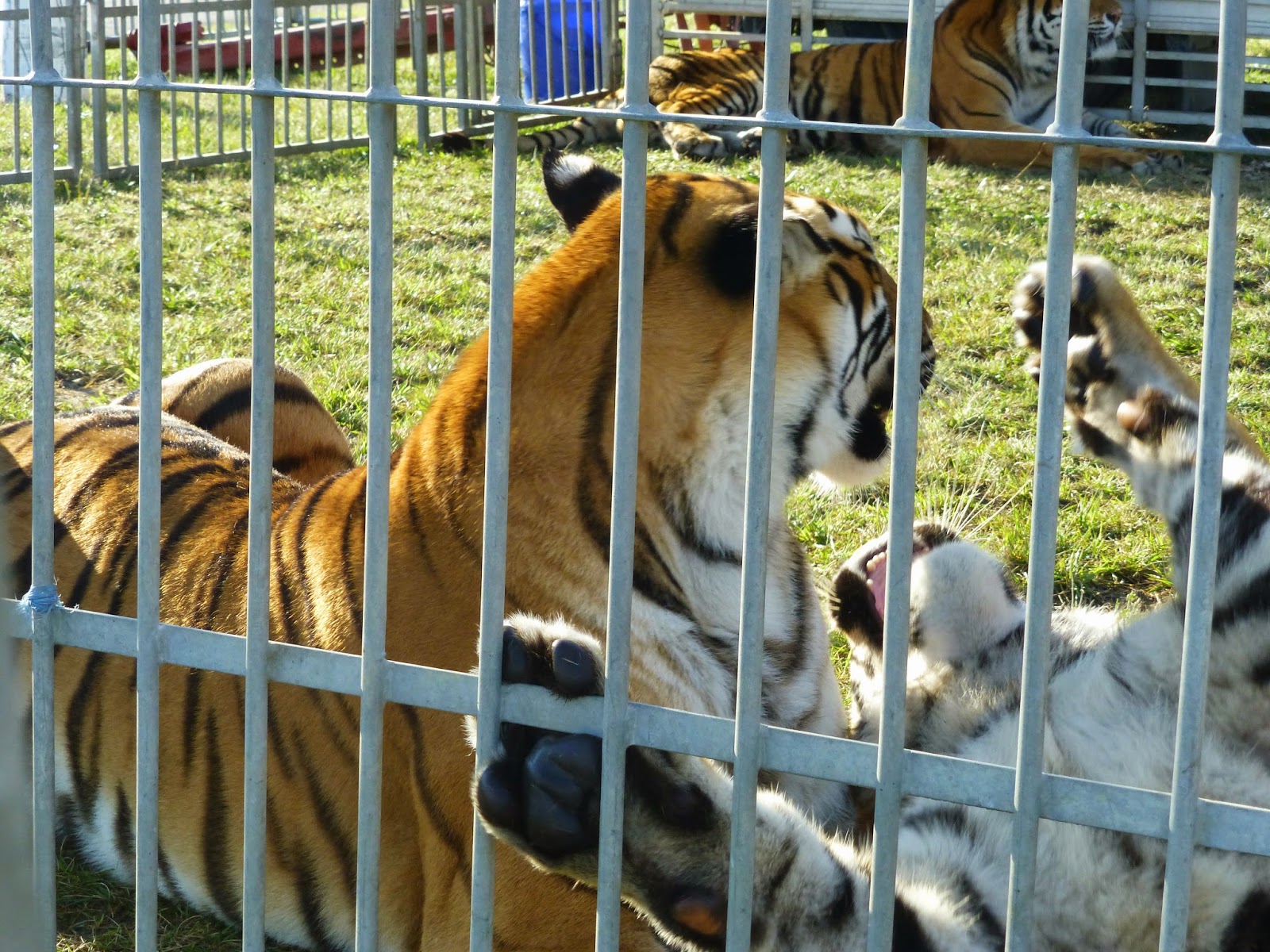 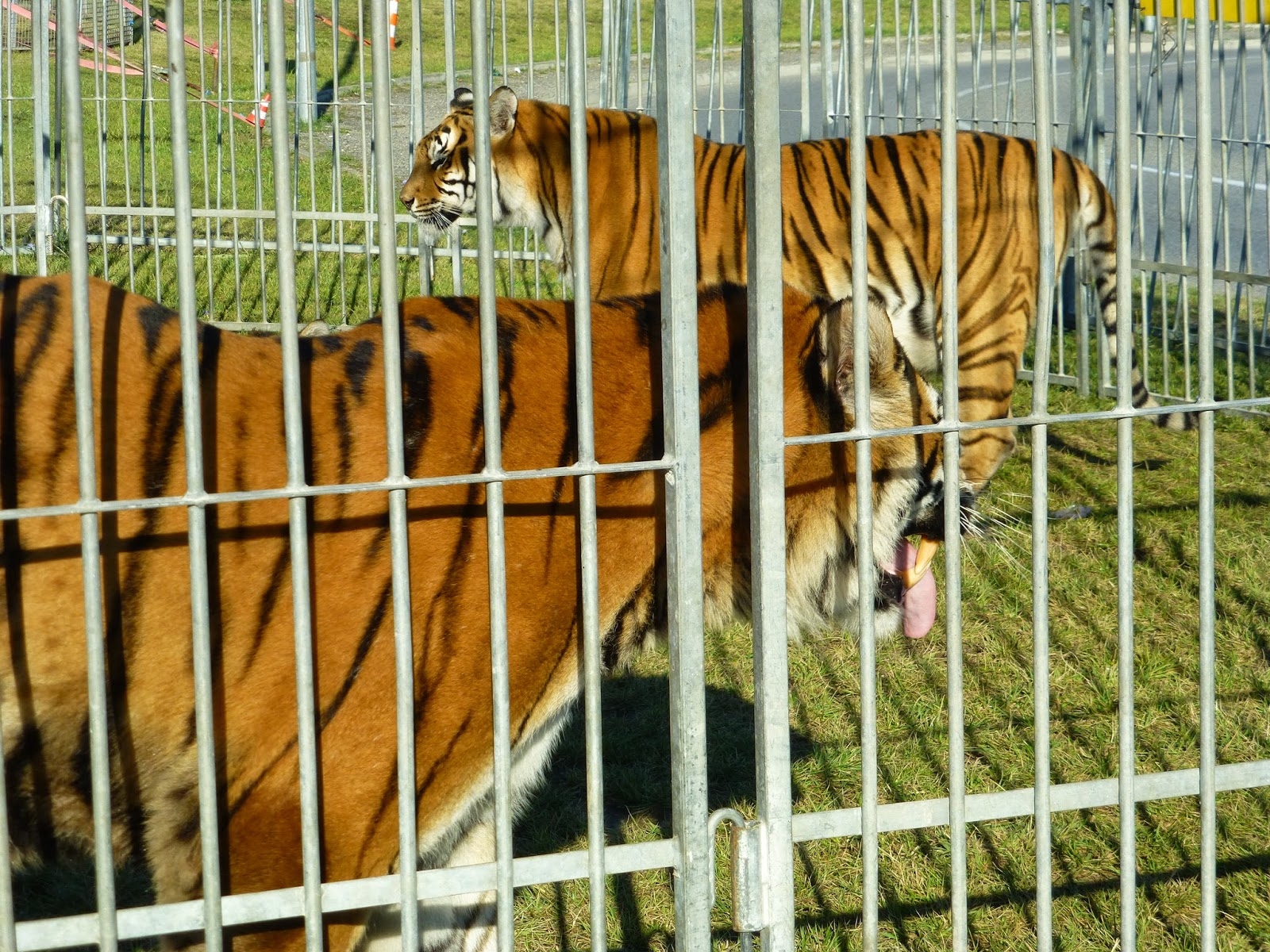 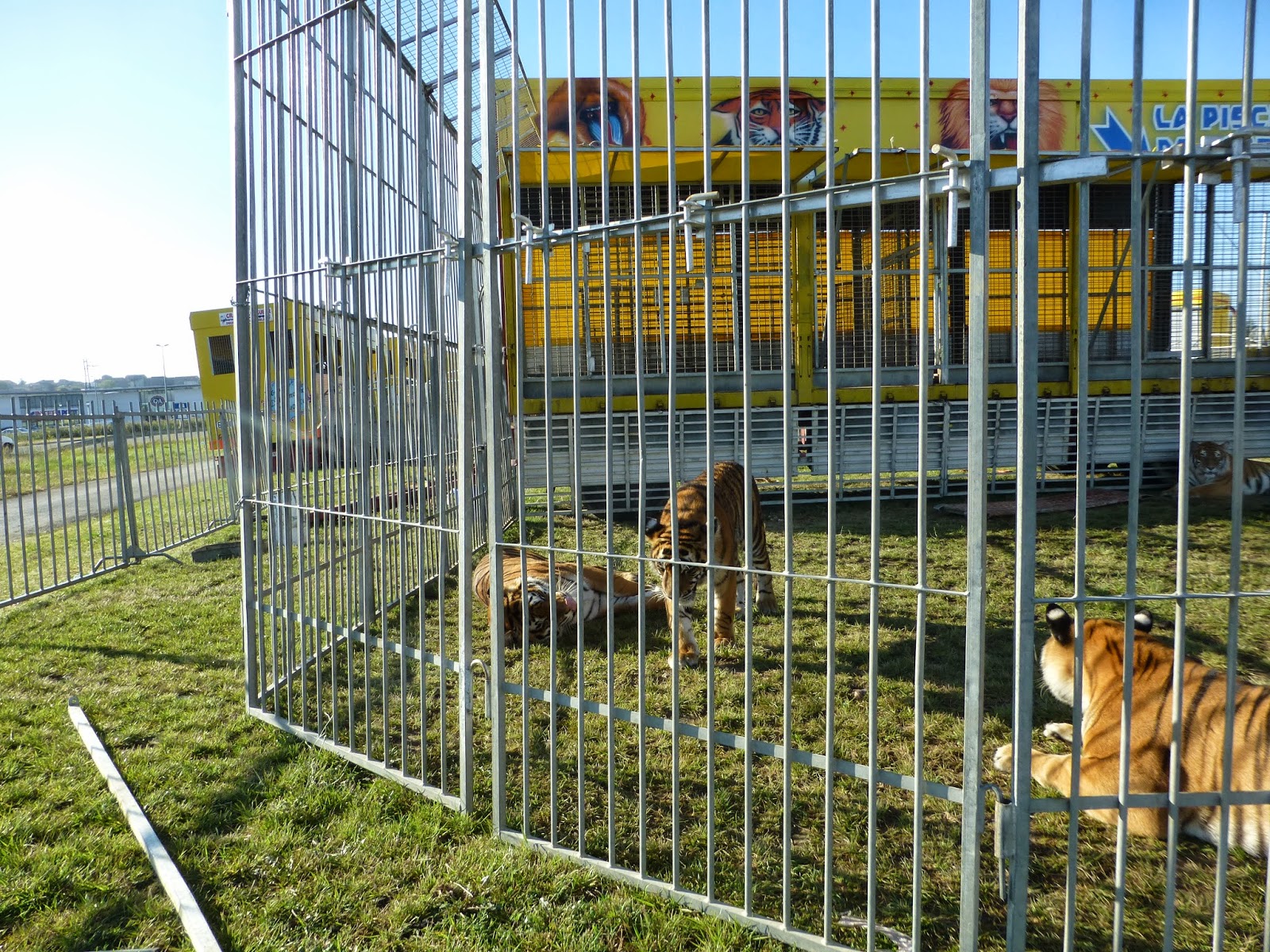 I really don’t know what to say, apart from wondering how this can be allowed, and wondering where the hell were all the protesters. 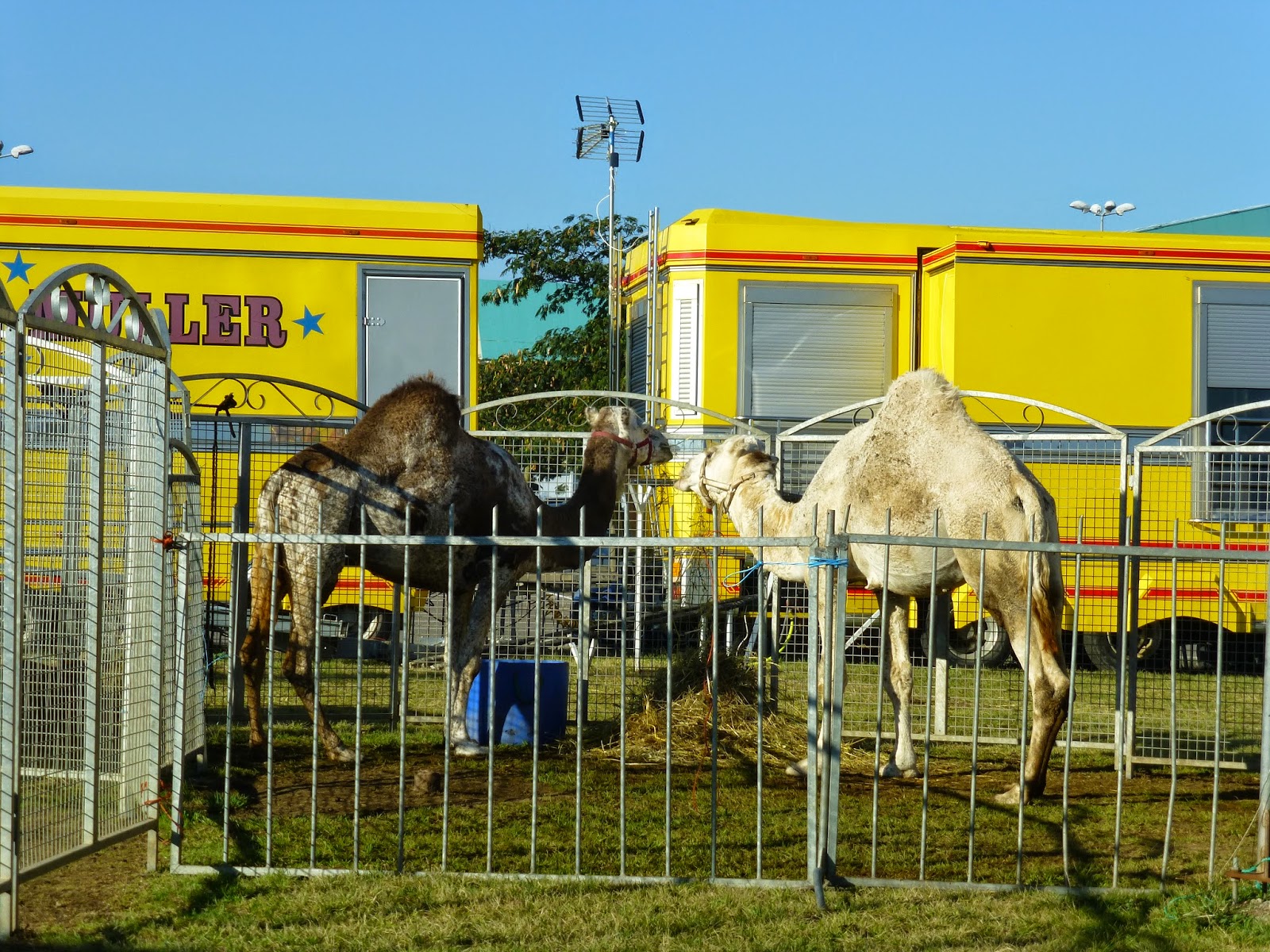 I became very self righteous and fell into “ How can the French allow this to continue” mode.

I fell into the trap of stereotyping a nation that still allow bull fights at their Spanish ferias, and found myself thinking “ This could never happen in Britain “ 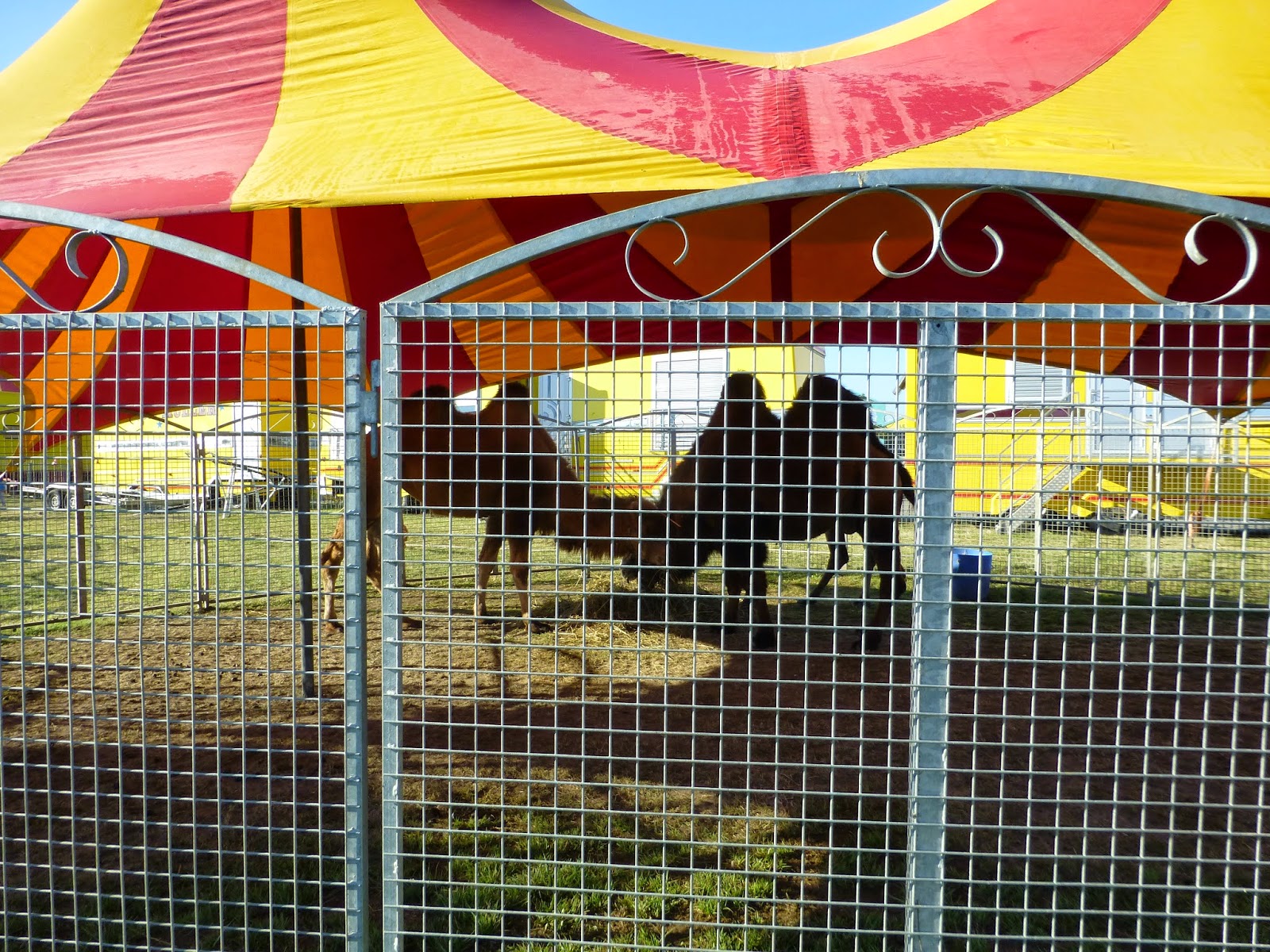 I wrongly assumed that in the UK, we don’t have performing animals anymore, but until the end of this year we do….. no lions, tigers and elephants, but there are still llamas, horses, camels, reindeer and zebras and apparently, snakes, performing in circuses in the UK. Performing horses will still be permitted, even when the new legislation comes into force in January 2015.

The only EU legislation covering the welfare of  circus animals  goes back to 2005, and requires the registration I mentioned. 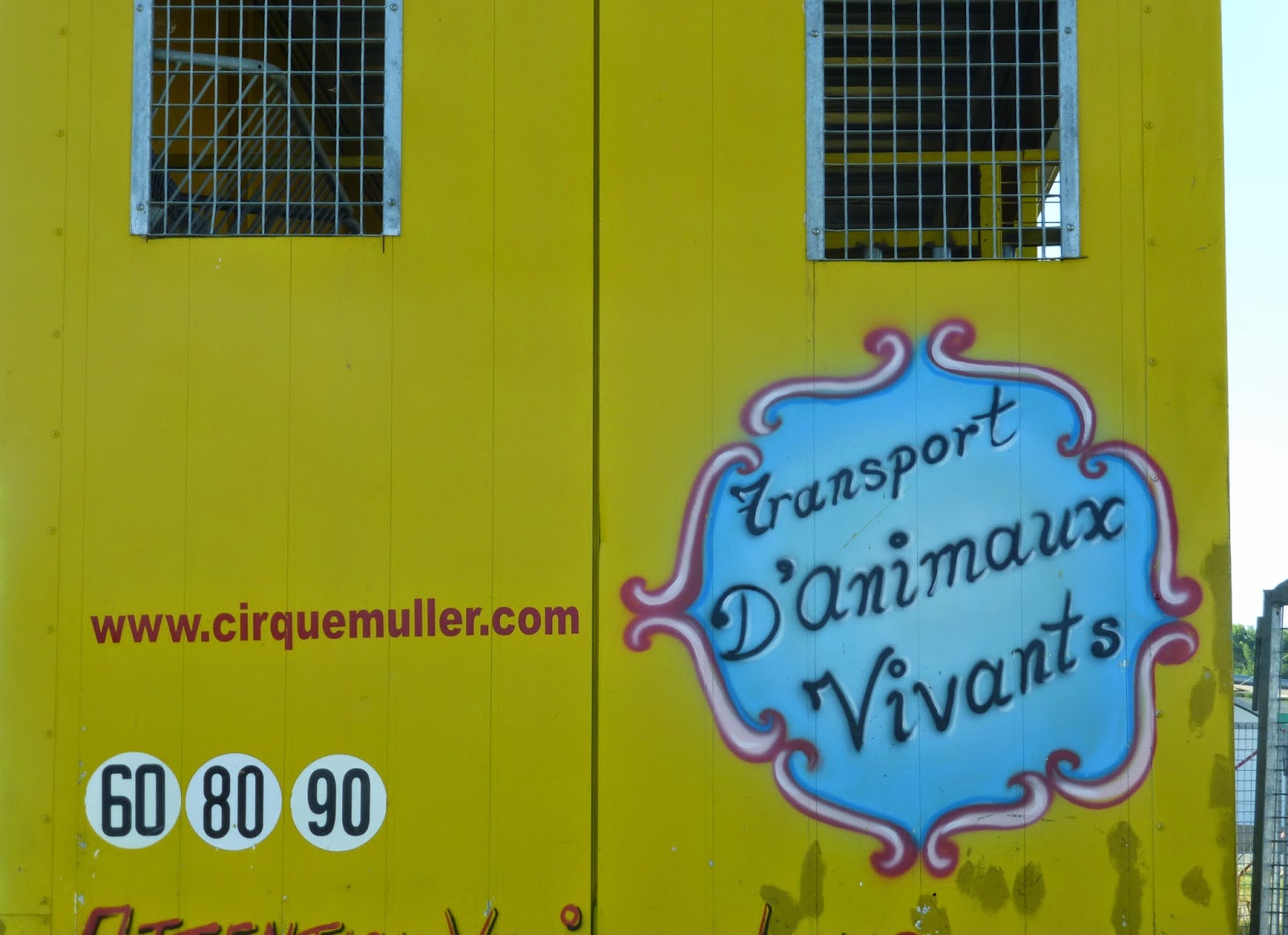 So…the hippo….and those amazingly beautiful tigers , along with lions, and elephants, can be moved throughout Europe in 12x2 metre trucks, all beautifully painted, and then made to perform tricks, jumping through rings of fire and perching on boxes, rearing up at the command of a man holding a whip. 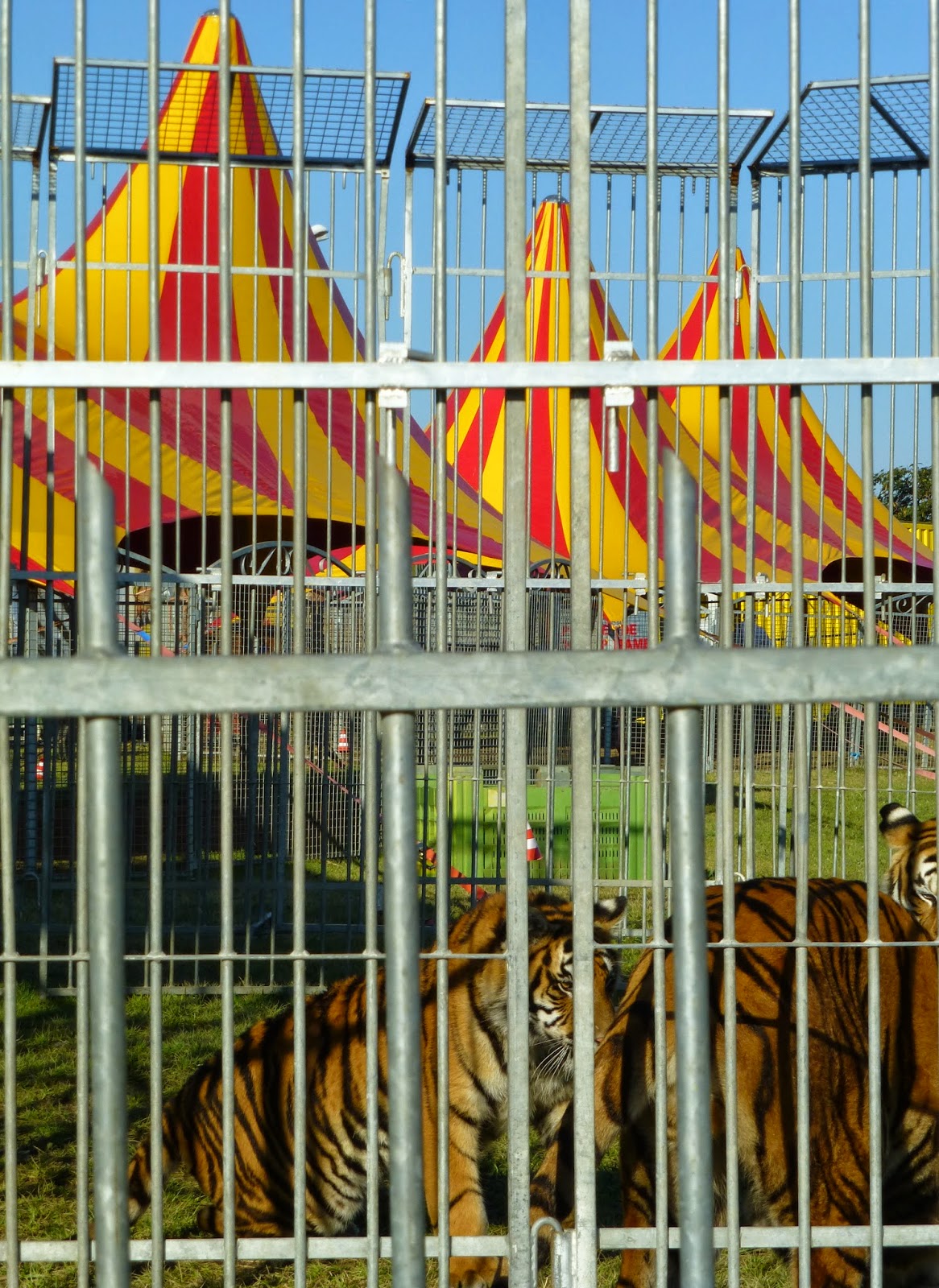