We've just had our annual Tour de France day. This year we decided to make a real trip of it, and we stayed overnight in Massat, in the Pyrenees so we could see a mountain stage. We’ve seen flat stages through French villages, a hilly Yorkshire stage last year, and the dramatic Carcassonne depart, also last year, so this was something new.

The hotel was basic, but pretty and interesting. I could have done without the creepy dolls set out in the public areas, 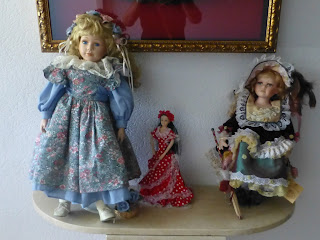 ..... and the bed could have been more comfortable and the décor in the French bathroom (which did not have a toilet) was fairly bizarre.


However, the staff were lovely and the food was amazing.

The hotel was actually on the route for Le Tour, and it was incredibly cheap.

Massat is a pretty village in the Pyrenees, and it welcomed Le Tour with open arms.

We sat in the café in the centre of the village, as the gendarmes argued with the café owners about table positions at the side of the road, and people began to select their viewing positions.

We had decided on a spot just before the village. We had checked it out the day before and thought we would be able to see any breakaway that had happened due to the previous climbs, as well as the peloton, going through, just before they hit the final 2 climbs of the day. We reckoned they would not be zooming past us so fast we would not be able to pick out our heroes…but fast enough to be excited by it all.

It all worked to plan. We had set up by about 9.30 am, waiting for the caravan to come through at about 1pm. The waiting was nearly as good as the arrival of the caravan and then the cyclists themselves. Verity kept us informed about the progress of the race by checking Le Tour app on her phone, so we knew exactly what was going on.

We chatted, we arranged chairs in the ever moving shade, we had a pic-nic and we organised our yellow umbrellas, Sky vests and other Tour paraphernalia. 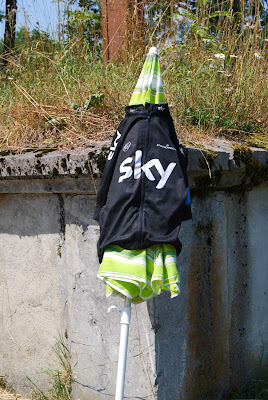 The caravan arrived with all its razzmatazz…..and we joined in, catching key rings, hats, wrist bands, bottles of water, juice, bags of various sizes, tee shirts and blow up pillows ( IBIS hotels advertisements).

We shared some of our loot with a French family who had positioned themselves nearest to us, and some Dutch supporters who had come fully equipped with their camper van.

We then awaited the real purpose of the day. A lone rider arrived, seconds ahead of the expected breakaway group.

No one who could threaten the main GC riders was in the breakaway, so we know that a few minutes later, the peloton, with all our favourites, would arrive.


We had a great view of them, as they sped past us….not too fast, as we had expected. Sky was in control of the peloton, leading the way into Massat, with yellow jersey Christopher Froome tucked safely behind them, being protected by his team.

This was the day that Froome had urine thrown at him. We did not hear about that until later. It does seem that the reporting of Le Tour questions how “clean” Froome and the Sky team are. Some Brits, of course, consider it to be just that the French never win anymore, and whoever is winning, or seems strongest these days is going to be criticised. I suspect it’s a bit more complicated than that, and after the years of Armstrong’s dreadful behaviour …not just taking the drugs, but the cruel and damaging denial that went with it for so many years….there will always be questions about outstanding performances. Froome’s performance has been outstanding.He is amazing. I believe, and hope that Sky’s brilliance has been that they have been one step ahead of others as far as the psychology, the science and the technology of cycling goes. I believed that when Wiggins was the hero, and now I think that Froome is just a superbly trained and honed athlete. I really do hope I'm right !

Anyway…..once again, being part of Le Tour has been a great experience. Sharing it with friends, as we did last year in Carcassonne, was a great way to do it. Who knows what we’ll do next year….there’s talk of Paris………Oh to see a Mark Cavendish win on the Champs Elysees!
Posted by Janice at 14:53