We decided that we would like to meet all our neighbours…..so, we sent them all a note, introducing ourselves,  inviting  them for aperitifs.  Apart from knowing there was one English family in the street, and that our immediate neighbours were Dutch, we had no idea about any of the others.


Our road, The Rue du Maquis de Trassanel is named after the Resistance group who were massacred in Trassanel in 1945. They apparently left Caunes to hide in a cave in the mountains, via a goatpath that went through what is now our garden.
There are 12 houses in the road, we are at the far end, furthest from the village.
Well, we discovered we have some fascinating neighbours.


There is a Brazilian woman and a Welsh man who have built an incredible wooden eco house into the hillside. They have a delightful child who at 9 years old speaks fluent English, French, Portuguese and apparently some Occitaine. 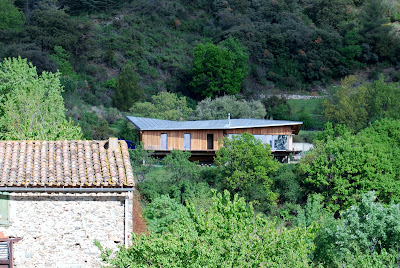 There is a lovely family with a 4 year old who enjoyed playing with a few of the vast collection of toys we have acquired to entertain younger guests. 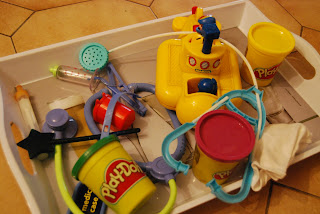 Grandpere lives next door to the rest of the family, and is really enjoying the south of France after retiring here 3 years ago from the north.

A beautiful French woman arrived with her equally beautiful boyfriend, and gave us a book on cycling on the Canal du Midi ( and a bottle of wine). I loved her immediately. I want someone to help me improve my French, and she was fantastic, as she listened, clearly understood my grammatically poor attempt at conversation, and every so often, gently prompted me with the right construction. That is exactly what I want. I later discovered that she helps run the local jazz club….perfect. 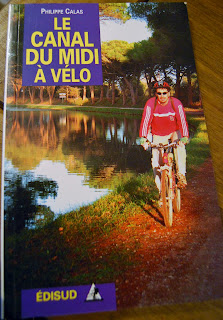 The ex- mayor and his wife arrived, and gave us a gorgeous orchid to welcome us to the street. 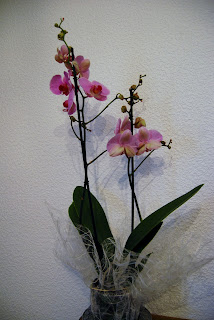 A lovely man arrived, apologising that his wife could not attend, handing us another bottle of carefully selected wine and a bag of fantastic toffees.

The Dutch couple came….again, with wine, they had only arrived back in Caunes the day before. They have been doing what we intend to do, spending half our time here in France and half back “home”. They have been driving down from Holland each year for the last 15 or so years.

Our other guests included a good friend from England who was actually our first official guest, the landscape gardener who has helped us organise the garden, the pool and some of the building work we have had done, his partner and their gorgeous 1 year old daughter,  and another English couple who lent us their  French house as a base for looking for a property this time last year. 2 other English families who live in the street also came, one of them was accompanied by a very adorable dog called Nellie, who was told several times to “ Go home”, but she was clearly having too much fun…… as were we.

We were nervous about staging the event, but are clear it was a very good thing to have done. Walking down into the village now takes much longer as it involves stopping and having conversations with our lovely neighbours, and a trip to the bar means lots of warm greetings and chatting….in various languages, with all manner of people.